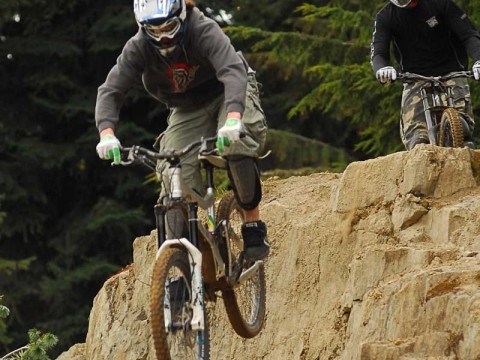 While the Ore Crusher appears to be an easy race on paper — a 6 km loop in the Cheekeye Fan area with just 300 feet of climbing per lap — it’s a deceptively difficult race with long false flats, root-y singletrack, and no real downhill sections where riders can rest.

Marty Lazarski posted the top time on the 36 km pro course Saturday, despite losing his chain in the first singletrack section. He chased hard to catch the lead group and by the second lap he was back in front. He completed the course in a time of one hour, 37 minutes and 19 seconds, averaging 22.2 km/h from start to finish.

By way of comparison, Lazarski finished second in the 67 km Test of Metal last year in 2:35:57 (one of two riders to break the record) for a pace of 25.8 km/h — about 3.5 km/h faster than the supposedly easier Ore Crusher course.

There were just three women in the Elite category. Ann Yew of Team Whistler placed first in 2:00:11, followed by teammate Linda Robichaud in 2:10:38. Karen Trueman of Victoria was third in 2:12:47.

Team Squamish factored heavily in the junior categories, with Maia Kilby doing two laps in female 14 to 15 in 45:03.61.

In female 18 to 19 Kristin Von Bibber of Squamish finished four laps in 1:33:51, followed by Eden Imbeau of Team Squamish and Jenny Strong of North Vancouver.

Getting into the adult age categories, Squamish adventure racer Jen Segger won the 20 to 29 category with five laps in 1:48:06. Jeanine Ball of Vancouver was second in 2:05:07, followed by Catherine Gendron of Squamish in 2:09:40.

“I really wasn’t expecting to do that well, I just felt so flat today and couldn’t get my heart rate up,” said O’Neill. “It was a pretty hard (Toonie Ride) on Thursday, and I think that threw me off a bit.

“The course was surprisingly tough, there was really nowhere to rest. It was pretty crazy at the start, wheel to wheel, but after the first lap I just rode at my own pace.”

Jude Goodwin of Squamish raced unopposed in female 50-plus, finishing four laps in 2:02:43.

In male 40 to 44 Joe Maika of Team Whistler placed third in 1:37:27, behind Ray Lachance and Pewter Holzhuter of Vancouver and Kamloops.

The event was a fundraiser for the Outdoor Leadership School at Don Ross Secondary, with approximately half of each entry fee going towards the program. The program also provided volunteers for the day, cheering on riders on every section of the course.

As well, the Ore Crusher is the first race in the Squamish Triple Crown, followed by the Test of Metal and GearJammer. Riders in all three racers will be ranked according to their total time in all three events.