Orecrusher bike race set for May 9 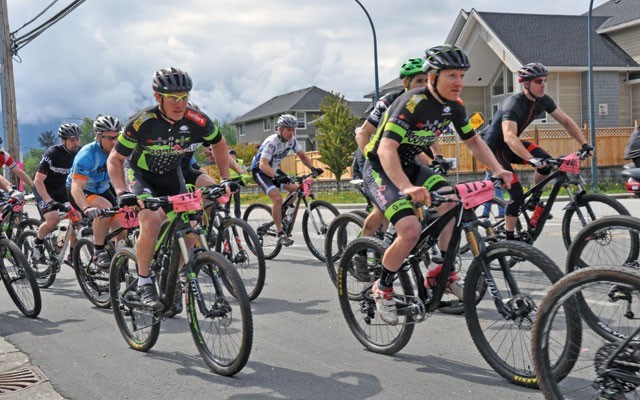 more ore Competitors take part in the 2014 Orecrusher bike race. This year's event is slated for May 9. File Photo by Ben Lypka

The first big cross-country mountain bike race of the Test of Metal season is coming.

Orecrusher is set to take place May 9 and will be the first time the event is run by new race director Darcy Reimer.

"This year, I am going to maintain the status quo," the long-time Squamish racer said. "To make the entry into this position a little easier, I'm not making too many changes."

About 225 riders had signed up, and though Reimer is happy at the moment, he's hoping to see a few more enter.

"I'm quite delighted. I think we usually have anywhere between 250 and 300 riders," he said. "(On) the race day, we always get quite a few late entries, so we're still hoping for a few more riders, but we're really pleased.

The multi-lap race, which was originally held a week before the Test of Metal before rising in status, still serves as a warm-up race for the entire season, rather than a solitary race. Reimer also noted Brackendale residents have latched onto the race

"It gradually became its own entity," he said. "It's really cool to see the Brackendale vibe around this race. A lot of people in the community gather around it and really support it."

Reimer explained that though he has dreams for what the race can become, they're unlikely to come to fruition because of larger challenges.

"The course isn't really going to change that much. It's still through the Cheekye sand trails of Brackendale, again a multi-lap race through there," he said. "At some point, it would be great to cross the highway and introduce people to White Rabbit.

"It would make things quite challenging to deal with some traffic situations."

The Orecrusher registration fee is $60 and can be paid online at testofmetal.com/registration.

The Orecrusher is the first of the four-race Test of Metal Group of Events season, which will see its flagship race, Test of Metal, celebrate 20 years on June 20. The two other races are Gearjammer on July 18 and Just Another Bike Race (JABR) on Aug. 15.

Test of Metal founder Cliff Miller added there will be an event at Brennan Park Recreation Centre the evening before the loop's best-known race. He noted details are still being sorted out for the celebration.

Miller is thrilled to have made it for two decades.

"Thank you to the community of Squamish for supporting us for the past 20 years," he said.

A handful of local figure skaters headed to Vancouver Island to chase gold earlier this month.

Brennan Riddle was successful in the hunt at the 2015 Super Series Vancouver Island competition from April 10 to 12.

Riddle took the top prize in Star 4, Group 3, U13 at the competition on the strength of two axel jumps, a combination and several technically challenging spins.

In the Star 4, Group 1, U13 division, Kate Risso placed fourth while landing a pair of axels.

A roller derby star in Squamish is looking for a few bucks to buck opponents.

Reed will attend training camps in Toronto and Calgary with the team in the coming months, and will be raising money through a garage sale in the Brackendale Art Gallery parking lot this Saturday (May 2) from 9 a.m. to noon.