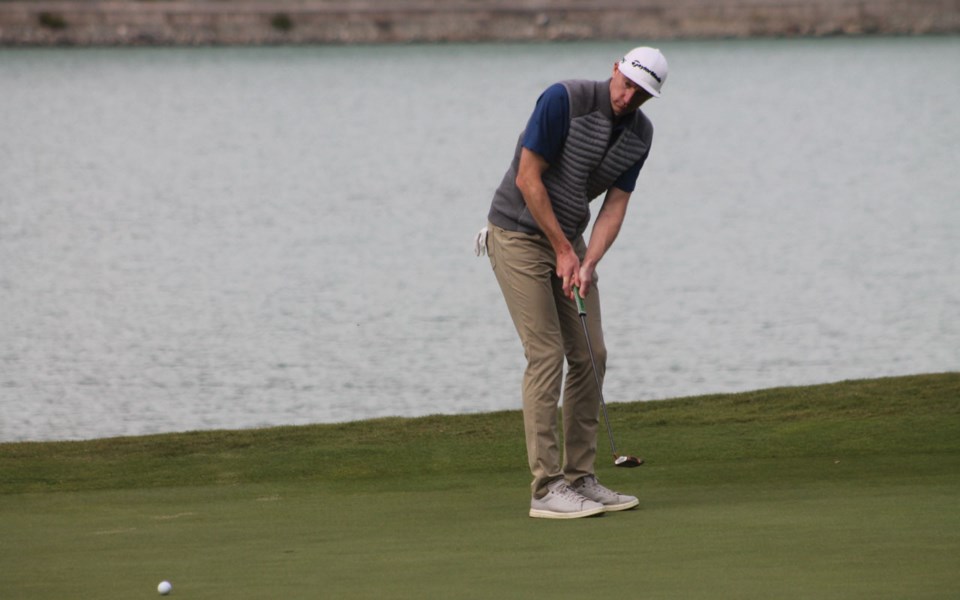 AWARD WINNER Padraic O’Rourke of the Chateau Fairmont Whistler took 10th place in the Professional Golf Association of BC’s Professional Development Program in 2020. Photo by Eric MacKenzie/PGA of BC

The Fairmont Chateau Whistler Golf Course’s head pro took 10th place in the Professional Golf Association of BC’s Professional Development Program in 2020, marking the seventh consecutive year that O’Rourke cracked the top 100 and his first time in the top 10 in the order of merit. It was a banner year for O’Rourke, who took home the association’s Dick Munn Golf Professional of the Year Award in October.

Pros earn professional development points “[t]hrough participation in continuing education, competitions, the PGA of BC Awards Program, annual Buying Show and various forms of volunteerism…” according to a release.

O’Rourke was the lone Whistler or Pemberton pro to make the top 100.

The Canadian crew may have joined the IBSF World Cup tour partway through the season, but Justin Kripps continues to look like he didn’t miss a beat.

Kripps has now hit the podium in three consecutive races after picking up a pair of third-place finishes at St. Moritz, Switzerland.

In the two-man contest on Jan. 16, Kripps and Cam Stones were 0.92 seconds back of winners Francesco Friedrich and Alexander Schueller of Germany while another German sled, Johannes Lochner and Florian Bauer, took second. Meanwhile, former Whistlerite Chris Spring and Mike Evelyn were second in their World Cup season debut.

In the four-man race the next day, Kripps’ sled, including Stones, Ben Coakwell and Ryan Sommer was 0.49 seconds back of Friedrich, who took the win while Austria’s Benjamin Maier was second. Spring’s sled, with Evelyn, Mark Mlakar and Shaquille Murray-Lawrence, placed 11th.

“It was awesome for us to get a double podium here in St. Mortiz. We sure missed the crowds and the champagne this year but we’re loving building this momentum together,” Kripps said in a release.

On the men’s side, Kevin Boyer was the quickest Canadian, taking 18th while Mark Lynch was 24th. At the top of the heap, Germany’s Alexander Gassner topped Latvia’s Martins Dukurs and South Korea’s Sungbin Yun.

Quebec City aerialist Lewis Irving claimed the fourth FIS World Cup podium of his career in Yaroslavl, Russia on Jan. 17 in the second of back-to-back competitions.

Irving’s tally of 120.36 was 4.98 back of Russia’s Maxim Burov, while another Russian, Stanislav Nikitin, placed second.

Ally had a 12th-place finish in the Jan. 17 competition as American Megan Nick came away with the win over Belarus’ Alla Tsuper and fellow American Kaila Kuhn. Other Canadians were Aumond in 16th and Thenault in 22nd.

Valerie Grenier came away with Canada’s top performance on the slopes in FIS World Cup action over the weekend.

Grenier scored a 15th-place showing in the giant slalom and Kranjska Gora, Slovenia on Jan. 17, as Italy’s Marta Bassino came away with the victory over Switzerland’s Michelle Gisin and Slovenia’s Meta Hrovat. Cassidy Gray, meanwhile, was 26th in her second World Cup start.

In the Jan. 16 giant slalom, Grenier was one slot back in 16th as Bassino bested France’s Tessa Worley and Gisin.

In men’s action at Flachau, Austria, Erik Read was the lone Canadian to finish in the points. In the Jan. 17 slalom, he placed 26th as Norway’s Sebastian Foss-Solevaag earned the win over Austria’s Marco Schwarz and France’s Alexis Pinturault.