Women’s only league would play Tuesday afternoons
May 13, 2011 9:53 AM By: Andrew Mitchell 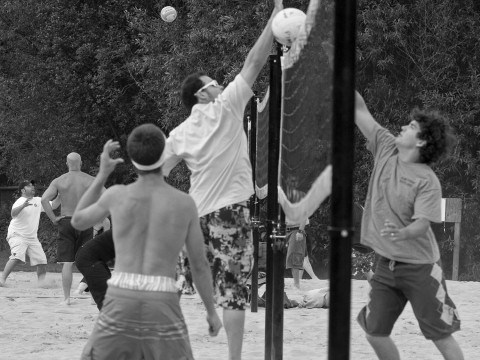 The Whistler Outdoor Volleyball Association is a local recreation story, growing in leaps and bounds in recent years to the point where the league was able to field competitive two-on-two (A) and three-on-three leagues (B), as well as two recreational leagues (C) last year.

Now, with membership around 300 players, WOVA is looking to add a fifth league for women only to the mix.

"The big difference is that the net will be lowered (six inches) to women's regulation height," explained WOVA director Scott Rogers. "It will make it a little more enjoyable for the ladies playing, and it ups the challenge. After the last few years of Rec and Intermediate leagues I think we have enough intermediate-level female players in town to create their own league." As well, roughly half the players in the league are women.

Pre-registration for teams starts on May 15 through email and the website, and Rogers expects most of the teams and players to return from last season. There will also be a registration night on May 31 at 6 p.m., taking place at the Dubh Linn Gate. Any remaining teams spots will be available, and players looking to join teams, drop by to meet with team managers and find a group to play with are welcome.

A Division, which is expert two-on-two beach volleyball, plays on Tuesdays at 5:45 p.m. All games are at Rainbow Park.

B Division, which is competitive three-on-three, plays Thursdays at 5:45 p.m.

Each division has around 12 teams.

As well as the leagues, WOVA is hosting two tournaments this year. "King of the Beach" takes place on July 10, with individuals registering and getting paired with other players through the day, with the players progressing to new partners based on their wins and losses.

The more relaxed WOVA Open takes place on August 7, with competitive two-on-two and recreational four-on-four tournaments, a beer garden, music and entertainment, a silent auction, a barbecue and a bocce tournament, with all the proceeds going towards the Whistler Community Services Society.

The 2011 season will run from June 13 to August 19. The registration fee includes shirts and a team volleyball.

Because of the popularity of the league, Rogers has approached the municipality about the possibility of adding a fourth sand court to Rainbow Park this season, reducing the number of grass courts on league nights while making it possible to host sanctioned tournaments in Whistler.

"It's amazing what one court could do," said Rogers. "Getting a third court was a big deal for us, and adding one more court would allow us to host invitational events and competitions."