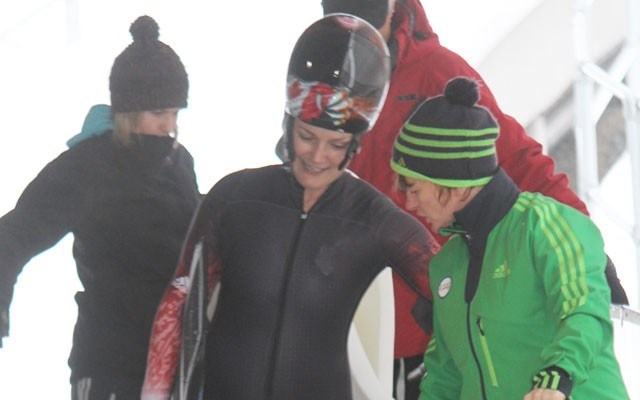 finishing up Canadian Lanette Prediger walks down the track after her bronze-medal-clinching run at Whistler Sliding Centre on Dec. 3. She also won a gold the previous day. photo by Dan Falloon

Lanette Prediger couldn't be faulted for any concern she might be sunk before she even started in skeleton action at the Whistler Sliding Centre last week.

With the Intercontinental Cup circuit in town for races on Dec. 2 and 3, the late-blooming Calgary slider sustained an injury before the first race that hampered her. Even in the face of a challenge, though, the 36-year-old slid to two medals and has now hit the podium three times in four tries this season.

"I had a little bit of a mishap during warm-up yesterday where I pulled my calf, so I was struggling a little bit with that. I tried not to let it impact my performance as much as I could," she said after the Dec. 3 race. "I said 'OK, I'll do the best I can on my push and then hunker down and have some good runs.' And that's what I did. I'm really pleased to have this kind of outcome considering the injury I sustained."

Prediger, who didn't start skeleton until she was 27, overcame slow starts in both runs to win the first race by 0.07 seconds over American Savannah Graybill. She rose from third place after the first run by posting the top attempt the second time around to nick past the Yank. Katie Uhlaender took bronze.

In the second race, Prediger was again hindered early, posting the ninth-best starts, and sat sixth at the halfway point. But she again was tops the second time around, leapfrogging her way past three competitors for bronze in rainy conditions. Graybill built up an insurmountable lead and knocked off teammate Uhlaender by 0.29 seconds and Prediger by 0.38 seconds.

"I'm really pleased to be on the podium. Obviously, that's a great accomplishment," Prediger said. "The conditions were a bit challenging. It was different than it was in training with the rain and whatnot, but the track crew did a great job of making the track.

"It changes the track, so it softens the ice a bit. Also, the start can be a little bit difficult to maintain, so it leads to a little bit of uncertainty."

Fellow Canadian Madison Charney was fifth in both races, while Cassie Hawrysh posted results of seventh and eighth, respectively.

Prediger also took a bronze at Lake Placid last month, and is pleased overall with her season after slipping out of World Cup consideration going into the year.

Bobsleigh Canada Skeleton traditionally re-evaluates its charges in December and may slide some competitors down while others could see a promotion. With three medals to her name, Prediger couldn't have done much more to at least put herself in the conversation.

"Of course, I'd love to be at World Cup. That would be awesome," she said. "I'll keep my fingers crossed."

German Martin Rosenberger made no bones about who the top male slider was in the two days of competition.

Despite not being overly familiar with Whistler's offerings, the 21-year-old easily topped the field both days, winning by 0.58 seconds over Austrian Alexander Auer and 0.66 seconds over countryman Alexander Gassner. He increased his advantage the second time around to 0.72 seconds over Gassner and 1.28 seconds over Canadian Patrick Rooney.

Rosenberger adapted quickly, acknowledging his first impressions of the world's fastest track were not encouraging signs for him. However, the day before competition, he got a handle on what he needed to do and executed nearly flawlessly to boost his overall win total to three.

"The first times were just brutal. I was a bit scared before each run, but the feeling went away," he said after his second win. "Two days ago, I felt the rhythm of the track and then I got to be fast."

Rooney placed fifth the first day, while Paul Fraser improved dramatically from his first race to his second, leaping from 14th to fifth.