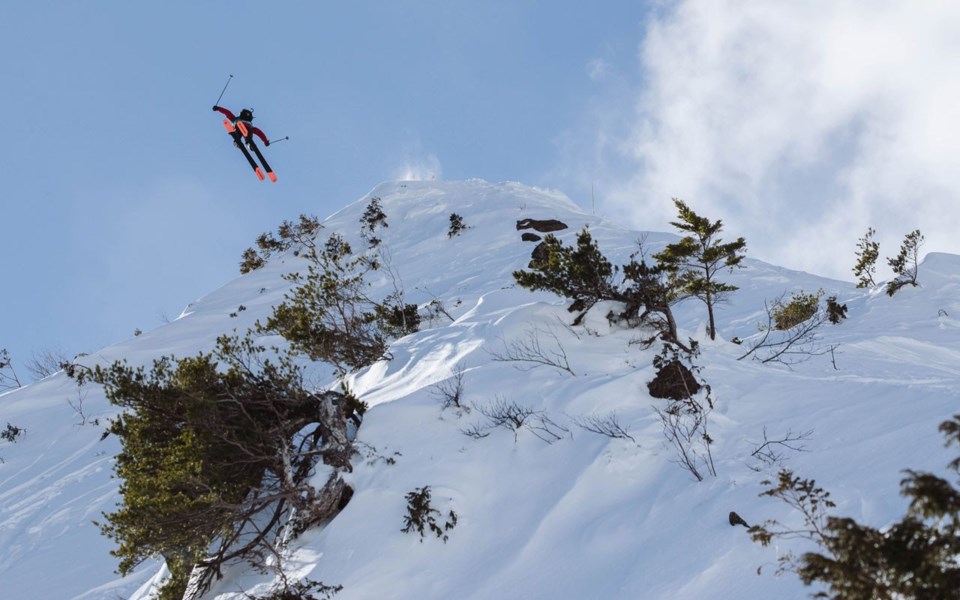 It didn't take long for Tom Peiffer to get his welcome-to-the-big-leagues moment on the Freeride World Tour.

With the gauntlet thrown down, the 21-year-old rose to the challenge, hitting a large drop right out of the gate and landing an impromptu 360 to set up a third-place finish.

"I was really, really surprised to see my score. I didn't really expect it," Peiffer said. "It didn't really hit me for about a full day. Being able to land and get down and do your first full run was what really had me excited.

"It's a good boost of confidence going into the other competitions and just knowing that you can compete with some of the higher guys and some of the big dogs on the tour right now."

While Peiffer acknowledged feeling some nerves in the start gate, especially in a competition clearly bigger than anything he'd experienced before, he had the chance to scout out what his competition was doing and avoiding. When Peiffer's number came up, he saw a chance to strike.

"I dropped second last in the pack, so I knew nobody had hit (the drop) and for me, it was a glaringly obvious feature to hit, especially going into my second feature where I did the big 360," he said. "For me, it was the top section of my run that really stood out."

Later in his run, however, Peiffer suffered a brief stumble, putting him down momentarily. He wasn't penalized severely by the judges, who saw the stumble as something no rider could have avoided as opposed to a line he executed poorly.

"From past experiences in competitions, that's a pretty big thing to happen," he said. "An action I did didn't cause that; it just happened.

"My mouth dropped and I literally gasped. 'Shit!' It's a pretty big thing to happen and that's what made me so surprised to still manage to get third."

The most surreal experience of the competition, Peiffer recalled, was standing on the podium beside the only two people to best his run: winner Markus Eder and runner-up Tanner Hall.

And with the competition site being smaller than the locale originally planned for the Hakuba event, Peiffer is well aware that the tour hasn't thrown its toughest tests at competitors yet.

"It wasn't as challenging of a venue for the first event, which is why I'm still super nervous for other events," he said with a chuckle.

Joining Peiffer in Japan was twin brother Liam, who finished 14th in his debut.

Dropping earlier in the competition, Liam acknowledged playing it a little bit safer, a move that was rewarded accordingly by the judges.

"Obviously, the biggest concern is showing up and crashing, or pushing yourself too hard," he said. "Unfortunately, I didn't end up (doing) too well. I think that's partly because I skied a line that I was a little bit more comfortable with. I think I skied it great, but I should have chosen something a little more difficult and should have chosen something that the judges were looking for at that particular venue.

"It's a learning experience and we just have to take it as it goes."

What's encouraging for Liam is he knows what he could do differently next time out.

"There was a skiers' right line and a skiers' left line. The skiers' right line did have that big jump off the top that Tom hit and had a few other poppers down to the bottom. The one that I chose was pretty mellow, mostly through the top and the midsection, and then at the bottom, it's definitely steep and gets into the cliffy section," he said. "I decided I wanted to ski the steep, cliffy section so I made the call to go out that way."

A major adjustment for North American competitors is they have less familiarity with visual inspection, where athletes are not allowed to pre-ride the venue before competition. However, the Peiffers have experience with the approach from World Junior Championships and have been able to work with it just fine.

"It's come a little bit natural to me. I've never gotten lost doing my line and I've done a pretty good job looking for landmarks," Liam said. "It's definitely been an adjustment and I'm still trying to gauge the size of features accordingly."

Next up is a competition at Kicking Horse in Golden, B.C. this weekend. With a site where junior competitions have been held being considered for the competition, both Peiffers are confident going into a Canadian event.

Tom, meanwhile, isn't looking to get too far ahead of himself after his early success.

"Staying humble and focused is what I'm going to focus on right now," he said.