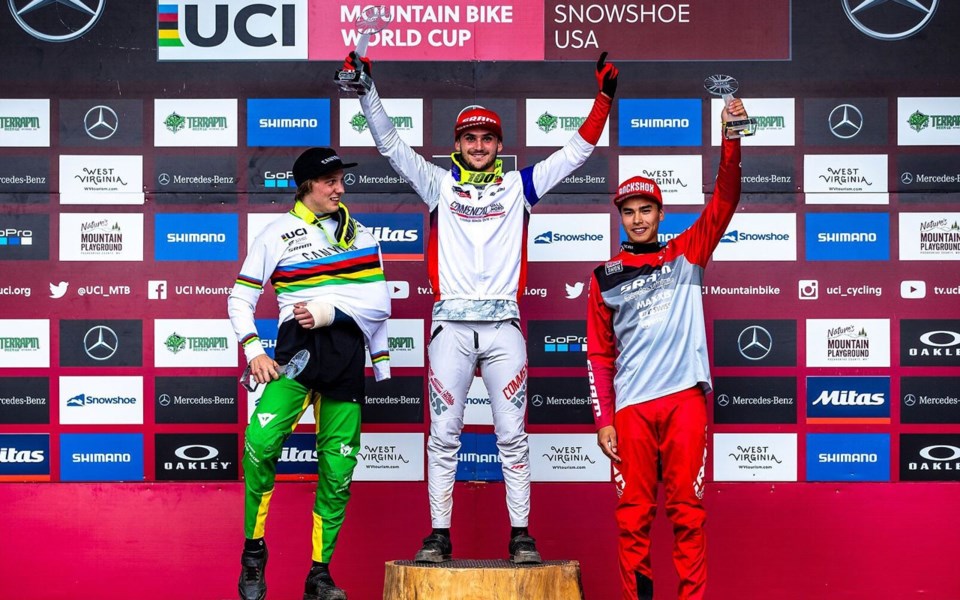 Lucas Cruz wrapped up his junior downhill career on the podium.

"I was really trying to focus on pedalling where I could. It was a pretty flat track compared to all of the other ones, but it had big rock gardens and really technical jumps, so wherever I could, I was doing pedal strokes and trying to keep my speed high," he said.

While one might not consider the heart of Appalachia to be prime mountain bike country, Cruz was pleasantly surprised with Snowshoe's inaugural World Cup.

"Coming into it, everyone was a little skeptical of how it would work out because we all heard that it was a super tiny venue and there was no internet, no cell service. We were just way out in the boonies," he said. "It was actually the complete opposite. It was an amazing run. We had really good weather and the race went super smoothly with really tight times. It was the best finale we could ask for.

"We had a huge turnout and there were crazy American fans lining the entire track from top to bottom, so it was really cool to see."

Entering the race, Cruz was jostling for third place in the overall standings with fellow Canadians Patrick Laffey and Eliot Jamieson, and knew going in that whichever of them performed best in the final race would stand on the season podium. Jamieson took sixth in the race while Laffey was 10th. Squamish's Seth Sherlock, meanwhile, ended up 19th.

In the elite men's division, Great Britain's Danny Hart topped France's Amaury Pierron and American Charlie Harrison for the win. Mark Wallace was the top Canadian in 21st while part-time Whistlerite Kirk McDowall took 23rd. Whistler's Finn Iles crashed in practice and opted to sit out the race for precautionary reasons. No Canadian women raced in the elite or junior divisions.

Cruz was especially thrilled to hit the podium after missing the medals by just 0.01 seconds at the UCI World Championships at Mont-Ste-Anne, Que. the weekend prior.

"That was a tough one, for sure," he said. "I thought I had a really great run, but I had a slow leak that started in about the last quarter of the track so I just cased the jumps at the bottom and that lost the podium margin for me, I think.

"Going into Snowshoe, I was determined to get that third-overall podium spot."

Admittedly, it was doubly disappointing to have the narrow miss given how special it would have been to secure that accomplishment, as well as the memento, on home soil.

"It was a tough one for sure because we had lots of friends and family come out. There were tons of people there and, obviously, I really wanted to do well," he said. "I feel like I did everything I could and I was in a position where I definitely could have won it as well.

"It was a tough race but I'm happy with how it ended up."

Still, Cruz was pleased to go home with two podium appearances this season, as well as three other top-five placements. He felt he grew as a rider and is more confident making the jump into the elite men's division in 2020.

"I definitely feel like I'm way more confident on my bike now. It kind of clicked at Crankworx, riding with all my friends and just pushing each other, feeling more comfortable riding fast," he said. "I'll definitely ride a lot more with good friends and push each other this winter so that when we come into 2020, we're ready for elite."