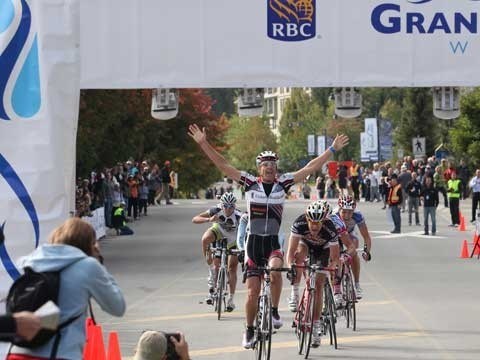 After 122 km of hard racing the first RBC GranFondo from downtown Vancouver to Whistler came down to a sprint to the finish.

Andrew Pinfold, riding with United Healthcare presented by Maxxis team, had the legs for the last attack and made it to the line with arms raised at three hours, 14 minutes and 29 seconds to take the Giro category. To put that into perspective, Pinfold and the lead group averaged a speed of just over 37.6. km/h the entire distance, with 2,400 metres in climbing and a net gain of 650 metres in elevation from start to finish.

Nic Hamilton of Trek Red Truck Racing and Tim Abercrombie of Garneau Evolution were second and third with identical times of 3:14:29, with less than a bike length separating them. Jamie Sparling, Marvin Guzman, Sebastian Salas and Morgan Schmitt were also with that lead group - with Schmitt placing first among riders in Category 3 and Guzman first in Category 2.

The top local rider was Team Whistler's Trevor Hopkins who finished 60 th in 3:30:40. He was followed by teammate Josh Stott two seconds later.

Stott managed to keep up with the lead group as far as Squamish before he was dropped.

"I buried myself," he said. "I don't think I've ever been in the same race with guys of that calibre. I tried to stay with them, but they put the hurt on me through Squamish and I was dropped.

"Myself and another guy were riding together when we were caught by another train, and I was like 'sweet.' Dwayne Kress (of Squamish) and Trevor (Hopkins) were with that group and we rode together pretty much to the end.

"What was really impressive was seeing the pros like Andrew Pinfold, just hanging back relaxed until they were ready to make their move - then moving their way up to the front of the pack like everyone was standing still."

Stott says he would do the race again, but would definitely train more to be able to keep up with the lead group. A mountain biker, he said he doesn't get as much time on his road bike and was feeling it for the last part of the ride.

Next up was Otta Kamstra with Team Whistler. He completed the ride in 3:33:17 in Category 3, 71 st overall. He managed to stick with the lead group until Furry Creek.

"After that I settled in with a group of around 12 through Squamish, although we split up around Alice Lake when another group came up," said Kamstra. "Jason Shorter was in that group, so I switched teams and we all rode the rest of the way at a nice pace and shared the work."

While the hills were challenging, Kamstra said the downhill sections were incredible.

"Even when the road was slightly downhill you were doing over 60 (km/h), and easily a good 70 or 80. I was thinking that it was good there was no tailwind because the downhills were fast enough, and on the hills you really had to work for it."

Kamstra was also blown away by the level of organization.

"The organizers did a really nice job and a lot of work, especially coming out of the city and up Taylor Way where we had the road to ourselves," he said. "There were feed zones and first aid stations and you were really well looked after."

One spot back of Kamstra was Jason Shorter in 3:33:19. Although he was having trouble with back pain he wanted to be part of the first GranFondo.

As for the ride itself, Shorter says the start was civilized and the Giro didn't start to break up until after the Upper Levels Highway section of Highway 99.

"It was good, fast racing the whole way," he said of the pace. "It was a little chaotic to Lions Bay, just a big group where everyone was together and fast. It spread out a little and was more civilized, but it was definitely racing and you hung in with whatever group you could."

The top women held together until Whistler. Squamish's Brandi Heisterman managed to stick with the group almost until the end. She finished in 3:44:25, just six seconds back of first.

She was proud of her efforts, especially given the fact that she dusted off a nine-year-old road bike just before the race and rolled up to the start line wearing her mountain bike cleats.

"I pulled so much, worked so hard and headed lots of attacks and tried to get away every chance I got," said Heisterman.

The more experienced road riders always worked together and reeled her back in.

The group hung together until the Cheakamus Canyon section and by the time they reached Whistler there were still over a dozen riders with the lead group.

At that point Heisterman knew she likely wouldn't win the sprint to the finish, so she consoled herself by making it as hard for the other racers as possible.

"When we got to Function I knew the other girls were going to pass me on the sprint, but I was going to make them suffer for it," she said. "(Team Whistler's) Ann Yew was in there with me and we pushed the pace until the end."

Lea Guloien of Total Restoration was first in 3:44:19, followed by Leah Kirchmann of Trek Red Truck and Claire Cameron of Mighty Riders in 3:44:20.

His day nearly started in a disaster when he looked down five minutes before the race start and noticed that his front wheel was completely flat. He started to call out for a pump and the volunteers came through, finding a floor pump and refilling his tire just moments before the race got underway. Luckily Boehm had just forgotten to close the valve all the way and there was no puncture.

With that taken care of, Boehm settled in to enjoy the ride.

"The biggest thing for me was getting to the start and there were blue skies in the city and no rain (as had been forecasted)," he said. "Everyone had already accepted that we would be riding in the rain, but it ended up being the perfect day. It would have been five times harder."

Boehm stuck with the lead group in the GranFondo, which included Andreas Hestler - the only rider to do both the GranFondo on Saturday and the Red Bull 5000 Down on Sunday.

"It was a pretty big group, but it started to break up after Squamish. Then in the last 10 minutes there were a few breaks and I managed to get in with one of the breaks and win the sprint to the finish."

The fastest overall GranFondo time belonged to Samuel Devlin, who finished in 3:24:46.

Over 200 riders from Whistler took part in the event - too many to list in this paper. The complete results are online at www.rbcgranfondowhistler.com.

Of note, local disabled ski coach and below the hip amputee Phil Chew completed the ride in 4:40:45.

Chew said he will definitely ride the event again next year, and believes he could finish around four-and-a-half hours with a new bike and more training.

"It was tough but it was really rewarding," he said. "I kept up a good pace the whole way with people who were going, and I was on it, too. About 30 km out my body started to go 'oh God, what have I done,' but I kept up the pace and fought through that, and everything went well."

Chew said riding with Team Whistler over the summer made a huge difference, and plans to be back with their Tuesday night program next year.

"With a new bike and fixing a couple of mistakes I made, I think I could do it in four-and-a-half hours. Just seeing the camaraderie out there, and among all the Whistler riders was really inspirational and really inspired me to keep riding."

Whistler's John Ryan, a paraplegic who once hand-cycled across Canada to raise money for spinal cord research, also did the GranFondo. Using only his arms, Ryan made the journey in 8:28:55, averaging over 14 km/h..