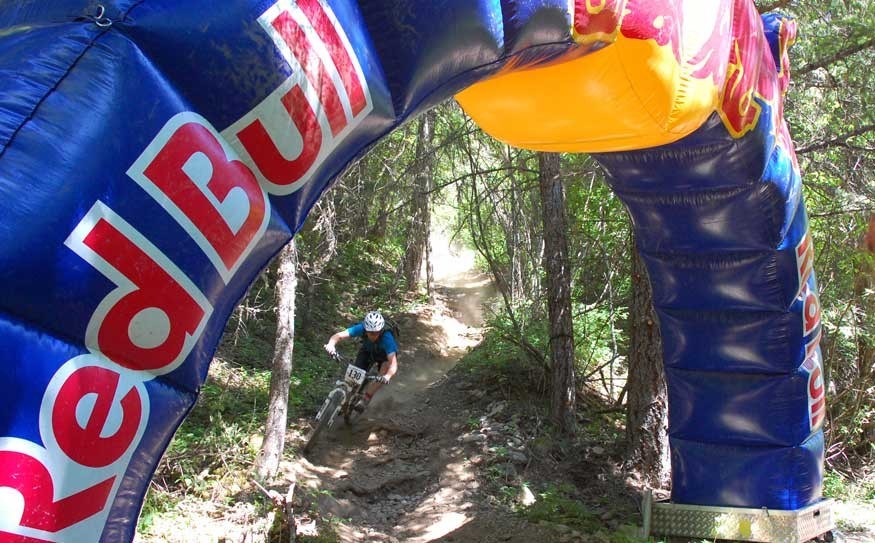 Sensational Shane Gayton rips to the bottom of the Overnight Sensation descent, a separately timed race-within-a-race on the NimbyFifty course. Gayton was sixth-fastest on that section. Photo BY Kate Whitley

Hot and dusty, but oh so much fun was the general consensus for the third annual NimbyFifty mountain bike epic in Pemberton on Saturday, May 26. So far no rider has won the event twice, although all four previous champions were on course looking to repeat the title and a shot at the $2,800 prize purse.

On the men's side, it was a battle from the start between Victoria's Max Plaxton — on a break after posting his best World Cup result — and Squamish's Neal Kindree. They were in a class of their own, and by the end of the race had close to 12 minutes on the rest of the field.

Kindree expected that Plaxton would win, but his goal from the start to was to keep it close — and hope for something unexpected to happen.

The race unfolded as he expected. He chased Plaxton up to the first prime at Radio Tower, with Plaxton taking the $100 — which he later donated to the youngest rider in the race, 14-year-old Rhys Verner of Squamish. Kindree took over on Happy Trail and won the second prime at the top of Big Nimby.

Plaxton was back in front by the time they reached the Overnight Sensation descent, and Kindree said that's where his strategy fell apart.

"It was extremely dusty, which I was not aware of, otherwise I would have tried to beat (Plaxton) to the start," he said, also noting that he probably would have chosen different tires. "I was riding behind him in clouds of dust, and it was really hard to see the trail or follow his lines, and that's where I had a bobble — I lost sight of the track and went of the trail and about 10 feet down. I didn't crash but I had to run back up and get back on my bike, at which point Plaxton had gained a couple of hundred feet. It doesn't sound like a lot, but at that speed it doesn't take a lot to fall off the pace.

"I know I can keep up with him if I'm with him and following his lines, but it's too hard to make up time at that speed. I wouldn't say I would have won the race if it didn't happen, but I definitely would have stayed with him longer. Once he had the gap he upped his pace and I probably slowed down a little. I was a bit devastated psychologically, and that was that."

Plaxton finished the course in two hours, three minutes and 43 seconds, while Kindree placed second in 2:06:48.

Overall, Kindree said he was happy with his race. "I would have liked to finish within a minute (of Plaxton) but it is what it is," he said. "I'm happy with the result and I took 10 minutes off my result from last year. I'm riding better, and overall I'm quite satisfied."

Michael Robinson was the fastest Whistler rider in sixth overall in 2:19:02.

In the women's race, the expectation was that Catharine Pendrel the current World Champion and the 2010 winner — would cruise into first place, but the first rule of mountain biking is that anything can happen. Pendrel had a double-digit gap at one point and won both primes, but flatted twice.

Brandi Heisterman capitalized and went on to win the race with a time of 2:33:39. Pendrel managed to make it close at the end, however, finishing less than half a minute back in 2:34:08. Third place went to Victoria's Mical Dyck in 2:37:51.

Heisterman said it was a huge surprise to pass Pendrel on the side of the trail.

"Pendrel dropped me like I wasn't moving," wrote Heisterman on her blog, after Pendrel pulled away on the Big Nimby climb.

Heisterman figured the real race was for second place and focused on her battle with Mical Dyck, which she had won by the top of the climb. She held her position all the way through to Moby Dick, one of the last trails on the course.

"I saw Catharine Pendrel pulled over, putting her gloves on," said Heisterman. "Not only did I have a chance to win $1,000, but I could beat Catharine. There were still a few kilometres of pretty loose, rocky, rooty, steep singletrack left. I pinned it. I was grinning so wide that I was eating dirt..."

When Heisterman hit the bottom of the singletrack she knew it was going to be tough to keep up the pace, and recruited some help.

"I still had three kilometres of road to the finish and into a headwind," she wrote. "My legs were shot. I was panicked.... I knew Catharine could bury me on the road. I needed some help.

The rider complied and with someone to help her break wind on the final section Heisterman took the win.

Heisterman thanked Pendrel for being a good sport and for making her day — and career.

Jennifer Schulz of Kelowna, the defending champion, was sixth in 2:55:35. Cathryn Zeglinski was the fastest Whistler rider in ninth, finishing in 3:03:24.

For the men, Vancouver's Chris Johnston was first in 5:37.2, followed by North Vancouver's Arthur Gaillot in 5:41.9 and Whistler's Jesse Melamed in 5:52.2. Plaxton was eighth and Kindree 22nd.