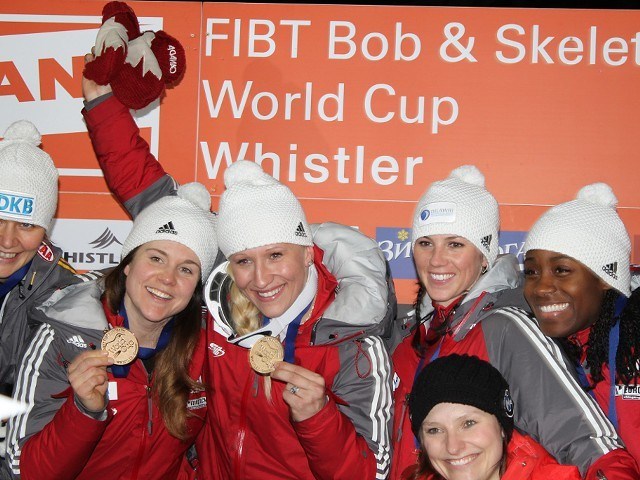 It was close, but veteran pilot Kaillie Humphries and rookie brakewoman Chelsea Valois kept their podium streak alive in Sochi, Russia, finishing the bobsleigh season with a bronze medal and a final tally of nine medals this season. They finished with six gold medals, including the world championship, plus two bronze and one silver.

Humphries streak goes back even further, including wins in the final four events — including the world championship — in the 2012 season while working with two different brakewomen.

"They weren't the best runs," said Humphries of Sochi. "I made a few mistakes, but I am still learning (the track). We are going to come back here again next year for international training week and work hard to clean things up."

As for her streak, Humphries called it a team effort. "I am super happy with the season overall," she said on Friday, Feb. 15. "We have some of the best sleds in the world with Eurotech, but our whole team is amazing. It is a great atmosphere on our team, and all of the athletes support and cheer for each other. When you have that around you, great things can happen."

The win went to the first German sled piloted by Sandra Kiriasis, followed by the American sled and Elana Meyers. The Canada 2 sled, piloted by Jenny Ciochetti and aided by Kate O'Brien, placed sixth.

Noelle Pikus-Pace of the U.S. won the women's skeleton race, followed by teammate Katie Uhlaender and Germany's Anja Huber. Mellisa Hollingsworth was the top Canadian in 14th while Cassie Hawrysh was 16th.

In bobsleigh, pilot Lyndon Rush and pusher Jesse Lumsden placed fourth overall, just 0.25 back of teams from Switzerland, Germany and Latvia. Chris Spring and Lascelles Brown were sixth and Justin Kripps and Neville Wright were 18th.

The Sliding Center Sanki in Sochi is new to many of the athletes, and according to some reports the level of maintenance was not yet up to a professional standard — and was probably made worse by unusually warm weather.

The leading four-man team piloted by Russia's Alexander Zubkov complained after the race that the course workers brought in from Latvia to improve the ice benefited the Latvian team, which won the event. Germany was second, followed by Zubkov, the overall World Cup winner for the season.

Pemberton's Jenna Spencer, one of a few local youths to become active in the sport through the launch of a new facility in Whistler, has emerged as one of the top up-and-coming athletes in the sport over the past few years, and this season placed second overall in the Youth Luge World Cup series with a silver medal and two bronze medals over the course of the season.

"I did the best I could every race and I think my overall result proves it," she said. "I will continue to work hard through the summer and keep getting better. I hope to bring home a golden globe (overall World Cup title) in the future. I'm happy to make Canada proud and I give a huge thanks to my coaches."