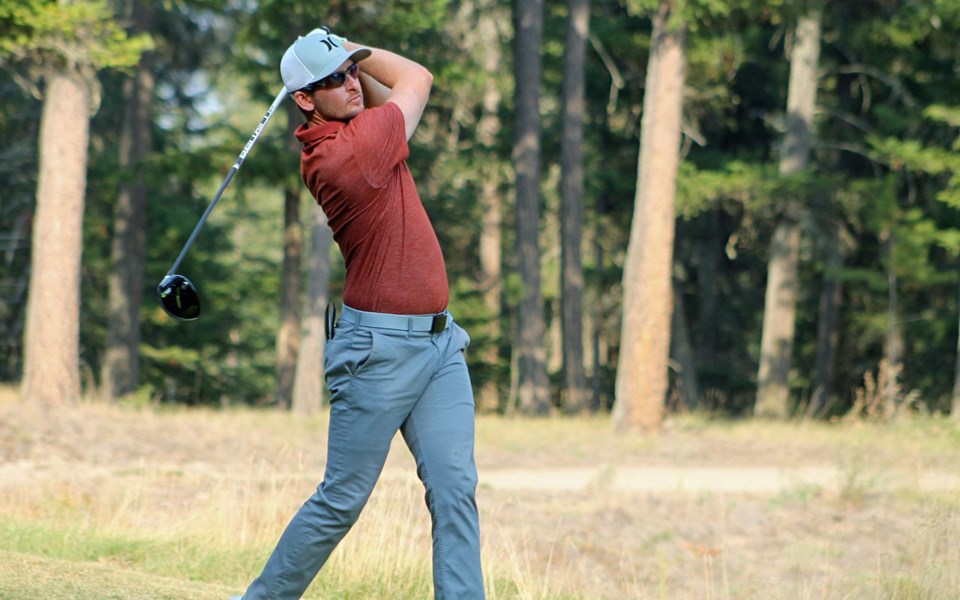 BACK-TO-BACK Defending champion Kevin Stinson is coming to the PGA of BC Championship at Whistler Golf Club on Aug. 19 and 20. <ParaStyle:CUTLINE\:CUTLINE Credit>Photo courtesy of the PGA of BC

The Professional Golf Association of BC (PGA of BC) is bringing its biggest event of the year back to Whistler.

The TaylorMade and adidas Golf PGA of BC Championship is coming to Whistler Golf Club (WGC) on Aug. 19 and 20, bringing plenty of the province's top professionals to town in search of their share of the $35,000 purse.

PGA of BC executive director Donald Miyazaki called the tournament the organization's "flagship event," as it's one event all its members can challenge together. He noted most tournaments are for specific members, such as head professionals, assistant professionals, or seniors, for example.

When WGC general manager Alan Kristmanson threw the club's name in the ring to host, Miyazaki was appreciative of the opportunity to take him up on it.

"[It's] the golf season in Whistler—we understand that revenue in public play and green fees in general is at a premium at this time of year—[so] it was very generous to have offered the golf course for two-and-a-half days for this event," he said. "When Al put his name forward, it was hard for us to look elsewhere."

The tournament was previously held at WGC in 2010. While at the time, it was the championship's biggest-ever event, it was held as an event that teamed professionals with amateurs for the first of three rounds. Since 2013, however, that element has been removed and the tournament has been changed to two days.

Despite trimming the tournament, the field stands at 99 golfers with another 30 on a wait list.

"We always say that the success of an event is never determined by the number. It would be easy to say, 'Hey, this a success because of how many people are in it,'" Miyazaki said. "We've had events where we haven't had a full field but the event in itself, how it was received, was a success."

Kristmanson said several staff members have "great memories" of hosting the tournament nine years ago, and he's hoping to find a way to make it even better this time around.

"The crew has been really psyched about getting the course in great shape for them and our customers obviously are benefitting from that," he said. "We always try to get it in the best shape we can, but we're trying to get a little more energy in some certain parts of the golf course.

"The staff is really excited to see how the course holds up to some of the best players around."

To get the course tournament-ready, the crew works to make the greens firmer and faster, while the course is otherwise challenging enough as is.

Kristmanson is looking forward to playing the tournament at home, though as one of the organizers, there's always more than just his own play on his mind when he's out competing in such a situation.

"It's really fun playing at home, but it's never easy. You feel like you're always working. You've always got your eye on a few things," he said. "I just go out there and have fun, enjoy the four-and-a-half hours out on the golf course and see how the course stands up."

In addition to Kristmanson, other Whistler-based participants include Padraic O'Rourke and Matthew Hillhouse of the Fairmont Chateau Whistler Golf Course, and Mike Nedoszytko and Binupa Wijesinghe of Nicklaus North Golf Course. As well, Dan Axford, formerly of Whistler Golf Club but currently the teaching professional at Vancouver's McCleery Golf Course, is set to take part.

Defending champion Kevin Stinson of Cheam Mountain Golf Course in Chilliwack is eager for his crack at retaining the crown. His best result on tour so far this season was at the PGA of BC Assistants' Championship at Seymour Golf and Country Club in June, where he tied for second, just a stroke back of winner Andrew Rasmussen of Delta Golf Centre. He's excited to return to Whistler.

"I remember it being a ball-striker's course, really tight with swirly winds. Any time you're up in Whistler, that's kind of the way it is," Stinson said in a release.

"We've got so many good players in the PGA of BC that you can't really think about winning. You've just gotta go out and do your thing, play the course and what it gives you and go from there."