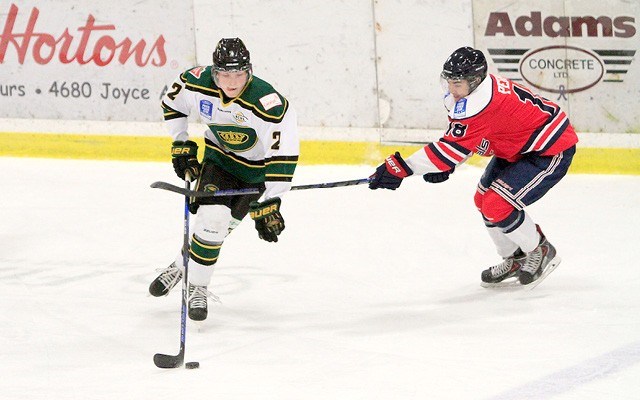 NO GAMBLE Whistler defenceman Ben Raffler is settling in to the Powell River Kings of the BCHL. Photo by Alicia Baas

Ben Raffler spent much of the autumn trying to prove he belonged. Some things seemed to fall into place, too.

Recalled from the Vancouver Island Junior Hockey League's Comox Valley Glacier Kings as an injury replacement early in the season, Raffler fought hard for a spot with the Powell River Kings and ultimately won it when the team was forced to make a decision.

"It's definitely an accomplishment. I had to earn my way onto the team and I haven't really had anything given to me so I think that's also helped me improve my game over the past four months, just having to work hard every day (to show) that I belong in the BCHL and on the team," he said.

"When the deadline came for the roster cut (Dec. 10), the other D-man was sent down to Jr. 'B' and that's when I knew I would make the team."

The 18-year-old has been a solid presence for (the) Kings club, which sits second in the Island Division with a 21-16-1 mark entering the Christmas break. While it's a bit of a jump in skill level, Raffler has been able to pattern his game based a little more on what he's seeing from more talented players on the ice.

"(I have to adjust to) the speed of the game and how quickly guys react to the changes out there. You're able to see one of the top guys on the other team and you know who to look out for, but even when you're out there, you don't know how good they can be and how fast they can move the puck around the ice.

"I don't think it's changed the way I approach the game, but definitely in practice, I focus on doing everything the right way and going to the gym afterwards. Even bonding with my teammates, hanging out, and building up chemistry, we do that all week so we play better come game time," he added.

Head coach Kent Lewis said Raffler has been on the Kings' radar since last season and they like what they've seen so far.

"He's fit in well with the group and he's still developing, which is what Jr. 'A' is all about."

Lewis was also impressed with the attitude Raffler displayed while essentially on an extended tryout, exhibiting the right mindset on the ice and off of it.

"He's calm with the puck and has got some poise. He doesn't get rattled and he makes good decisions. That's the biggest thing," Lewis said.

"He was patient and resilient, which are two very important qualities to have when you're a player."

Though the Kings are currently in a good position, Raffler hopes to see Powell River find a way to keep a few more pucks out of their net.

"I think we can go really far in the playoffs with the guys we have."