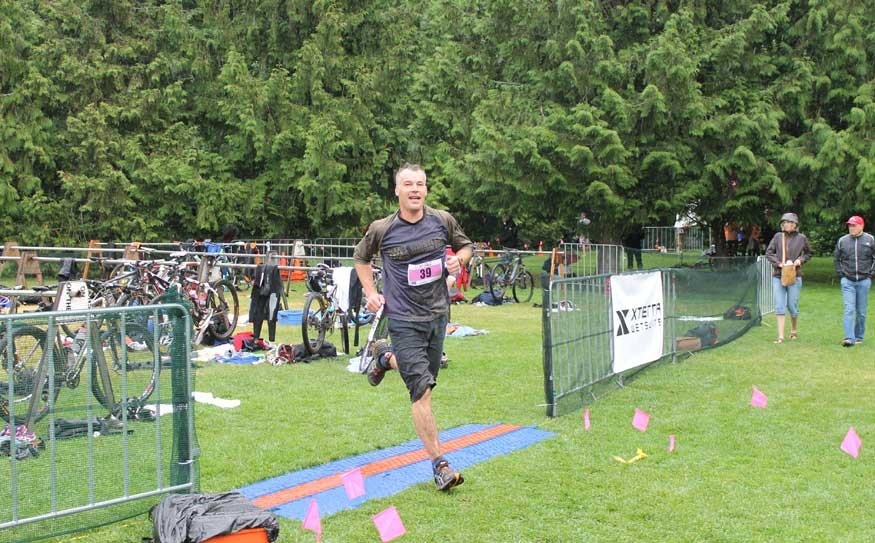 wet one Whistler's John Minton leaves the bike transition and heads out for the 9.8km trail run in Sunday's Xterra off-road triathlon.

Some unexpected rain hammered the Xterra Whistler course on Sunday, giving an advantage to local athletes used to riding in the wet at Lost Lake.

Squamish's Brandi Heisterman, a member of the national off-road triathlon team, was leading after the swim and bike leg, but it was Whistler's Adam Ward who was first to the finish line.

"I loved it," he said. "Lost Lake was the perfect place for the swim, and the bike and run courses were great I thought. I was actually a bit surprised to finish first, because of the lap system there was always someone in front of you, but I also had a bit of good luck there. One of the other (Championship distance) racers had a flat on the bike section so by the time I was starting my second lap he was just warming up on his first lap and we rode together. He had fresh legs so he pulled me along a bit, which made a huge difference."

Even though Ward broke his chain he still posted the fastest bike leg of the day.

"I broke my chain on a punchy little climb, but it didn't really make too much of a difference. I was about two kilometres out and it was pretty much all downhill from there anyway anyway. I just took one foot out, left one foot clipped in to push, and coasted to the transition."

He felt good at the start of the run, and he quickly reeled Heisterman and another racer to take the lead.

Ward said he liked the Lost Lake course, although he didn't have a problem with last year's more technical course on Whistler's West Side either. "I thought they were both great courses actually, and both were challenging. This one was a little less technical but the pace was a lot faster, and you were also doing something. The run course was a little different, there weren't many hills and it was hard to know where the trail went sometimes — you'd go left at a fork and find yourself on a lookout over the river — but it was nice too, and it was really fast."

Next up for Ward is the Kelowna Apple Triathlon in August. He's not planning to go to Xterra nationals in Canmore this year, or return to Xterra Worlds but will try again in the future. "I have a trip to New Zealand that's a week before the Xterra Worlds, so I had to make a decision. And (Xterra) is not going anywhere," he said.

For Heisterman, placing third overall was also a bit of a surprise. While she's a strong technical mountain biker and enjoyed the more technical course last year, she also knows that Lost Lake can be punishing. "Lost Lake is no easy feat," she said. "It's bumpy and there are lots of bridges. When the rain came the rocks got slippery, the bridges got slippery, and there are lots of punishing little climbs. So yeah, it was a good ride, really fun."

Heisterman will be competing in Xterra nationals in Canmore over the Labour Day long weekend, and will also race an Xterra in Utah before heading to the World Championships in Maui. She wasn't going to pass up an off-road race in her own backyard, and another opportunity to train.

"I still need to practice my swim — swimming is still my weakness and I need to be in the water with a lot of people around me," she said. "And I need to work on my transitions and the run as well; but I felt really good on the run after biking in this race so it's nice to know I'm improving there."

Heisterman also enjoyed the rain. "When Xterra gets hot it can be awful, especially when you get to the run and you have sweat in your eyes and you're cramping up. In Maui and Alabama it was so hot, so this was great, almost refreshing," she said. "I was probably one of the few people that was happy to see the rain."

Whistler's Mike Conway was another fan of the rain, placing sixth overall and fifth among men. Before entering his first Xterra two years ago he was a non-swimmer, but he knew he could make up any of that time on his bike on a wet day.

"My swim wasn't fantastic," he said. "I definitely could have done better, but beyond that the trails were just great. It's nice to have a hometown advantage — once the rain came I was like, 'sweet,' because I knew I'd be able to pick people off. I knew that some of the riders would struggle a bit with the wet with all the off-camber roots and bridges. I reeled so many people in, which felt pretty good. I got out of the water and looked back and there weren't that many people behind me, so I had a slow start to make up for." Conway, who spent more time training his swim technique this past winter, was 13th out of the water, but over six minutes back of Travis Chater, who finished the swim in 18:27. Conway had the third-fastest bike leg and second-fastest run to pull within 1:24 of Chater by the end of the race.

"It's hard, it definitely wears you out. It's a good trail, but I think it suits everybody because you can take it at a slower pace. But when you're racing it's the pace that kicks your butt, you're pedalling the entire time," he said.

Conway's next event is Ironman Canada at the end of August — his first attempt at that distance.

The championship distance Xterra featured two laps of a roughly 730-metre swim course, followed by two laps of a mountain bike course in Lost Lake that were roughly 13.5km. The run was two loops of 4.9km course that included a mix of Valley Trail, gravel and singletrack beside Blackcomb Creek.

There was no category for racers over 50, but if there were then Whistler's John Blok would have placed first in 3:00:03. Like Conway, he also struggled a little with the swim.

"It was good after the swim," he said. "The first lap (of Lost Lake) was a panic lap, and then I finally got into a rhythm on the second lap. The race really starts for me when I get out of the water, and the bike was fun — the first lap it was dry, and the second lap it was wet but you were going a bit slower anyway. It's a great park, it's an awesome course, and better than last year by a long shot — really entertaining."

There was also a sport distance race with one loop of each course, relays, and two distances of duathlon (run-bike-run).

There was also a relay race and kids race at the event, but results weren't posted at press time.