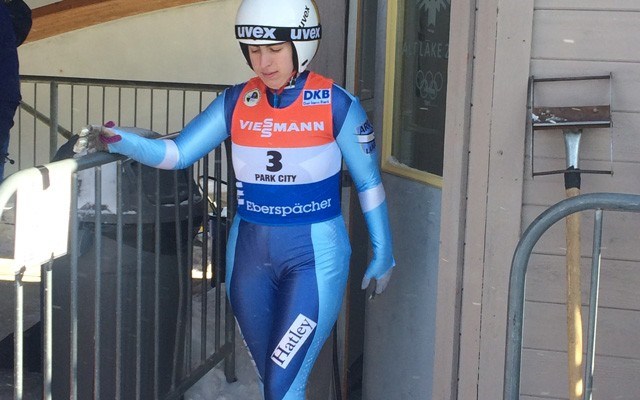 RAVENOUS FOR LUGE Veronica Ravenna is shown at her FIL World Cup debut in Park City, Utah on Dec. 17. Photo by Jorge Ravenna

Her chance to hit the FIL World Cup stage the first time was lost in a prairie blizzard.

But Veronica Ravenna regrouped and, a week later, made the jump to the senior circuit in Park City, Utah on Dec. 17.

The Whistler resident, who suits up for Argentina, took 16th in the women's event, a combined 1.349 seconds back of winner Erin Hamlin of the United States.

"Everyone there is so much bigger, so I wasn't expecting to do as well. It was great fun," she said.

"It's a little scary sliding World Cup for the first time because when you're racing with the younger kids, they make the track fast, but it's not a televised, paid (admission) race. It's a little scary not knowing quite what to expect. It's good to have your coach there and he's there to support you."

Possibly the most stunning element was Ravenna's initial World Cup run. Wearing the No. 3 bib, she found herself in top spot after a surprising number of racers had descended and ended up in 13th after the first go-around.

"After my first run, I was shocked more than anything. With my coach, he said if I beat two people, that was a good race. Then I took the trip back up to the start and I saw that I was still in first place after 10 people had gone down, so I was pretty shocked," she said.

In Park City, Canadian Alex Gough hit the podium for the third consecutive week, landing in third, while Kim McRae was seventh and Brooke Apshkrum was 19th. As for the men, Mitchel Malyk was the top Canadian, placing 18th, while Whistler's Reid Watts placed 28th as Russia's Roman Repilov took the win.

Ravenna had planned to compete in the Nation's Cup qualifying race in advance of the World Cup here in Whistler the weekend prior, but when the sleds were held up in transit because of inclement weather, the qualifiers were scrapped and the top 24 racers were entered, leaving her on the outside looking in.

"It would have been nice because Whistler's more my home track and I know what to expect here and I know the track very well. It sucked that the weather prevented us from racing, but it turned out pretty well," she said.

"If a team is missing one out of the three competitors, then they can link up with another country to fill in the spot. It's pretty new, the team relay, so they want as many people competing as possible," she said.

The team relay has a few different rules, Ravenna explained, with the most notable change being that coaches are not allowed to be with the athletes in the start gate. She also feels a little different going in, determined not to impede good showings from others.

"It's kind of nerve-wracking. You don't want to let down the other people," she said.

In other junior action in Alberta, Ravenna took a fourth with the team as well as fifth- and seventh-place showings in singles action. Ravenna will head to Europe in the New Year, competing in both junior and senior races in Germany and Austria. She also hopes to get the opportunity to race at the new PyeongChang, South Korea venue and at the senior season-capper in Altenberg, Germany.