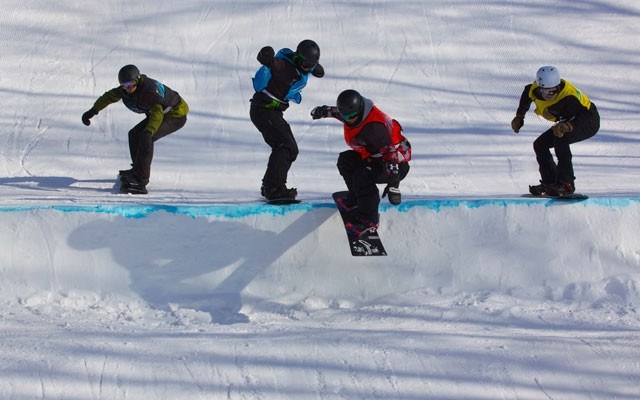 Whistler-based Reign SBX has enjoyed more success with international athletes than with locals.

The athletes have some pedigree, as the world's No. 1 para-SBX rider, Kyle Murphy, is on the team, as are all the Australians ranked fourth through seventh in their homeland. Shelly pointed out they are all potential World Cup starters this season as well.

But the native Kiwi is looking to get a few Whistler locals into snowboard cross, with a handful of spots still available for the upcoming season. The club is looking to the next generation to help with that.

In addition to the established coaching staff of Shelly, head coaches and business partners Dave Hugill and Rob Fagen, the team brought Ross Dunlop on board last year to skew the programming a bit younger after some people expressed interest.

"There were a couple of people interested in what we were doing at that younger age group, so we hired a development-level coach for these two younger, less-experienced athletes," he said. "This year, what we've been able to do is attract more younger athletes to that program, mainly from Australia.

"We'd love to get some local kids on board, but it's been a big challenge for us to figure out how to market to them."

Seven athletes have now registered for the development program.

Though the team started recruiting high-level athletes, Shelly said it made sense to try to expand the offerings to up-and-coming competitors.

"Our appeal started out more at the (Continental Cup) level and then what we've done over the last couple of years is try to develop the product offerings at younger age groups," he said. "We're attracting in 14-, 15-, 16-year-olds who have maybe done a little bit of boarder-cross racing and they want to get a little more serious about it.

"What we're trying to do is give them an opportunity to train with coaches who have got experience at the World Cup level... They're a good example for these athletes on what it takes to be a Continental Cup rider or a World Cup rider."

Team members are all based in British Columbia, but Shelly noted once competition season begins in the New Year, home is basically the mountain you're riding.

"Once we start travelling for NorAms, we're on the road more than we're home," he said. "It's two weeks on, five days off for most of the winter from about the end of January through to the end of March."

All told, the roster is made up of riders from Australia, Canada, New Zealand, Great Britain, Japan, Argentina and South Korea.

"We've had a really, really strong impact with overseas groups, but not so strong with Canadians yet," he said. "Even though we're based in Whistler, the bulk of our group comes from Australia."

Shelly theorizes the team's appeal to those coming from elsewhere is rooted in their own familiarity with the system. Young athletes in Canada often grow up participating in provincial-level programs, while the pay-to-play model Reign employs is more common elsewhere.

The cost for a full season is $5,000 plus the cost of a season pass. Programming starts on Dec. 4 and runs until the end of April, including on-hill and dryland instruction.