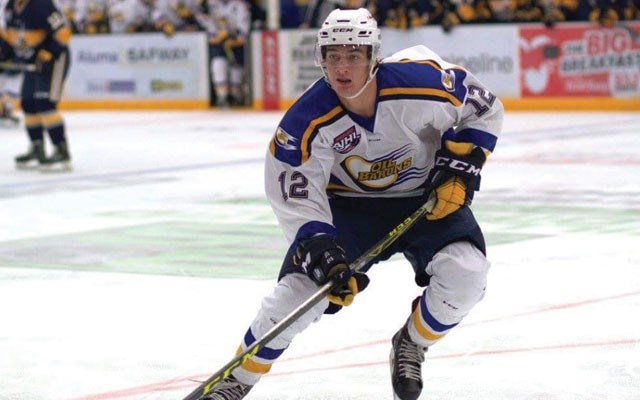 REITH FOR THE TOP Owen Reith has gotten off to a solid start with the AJHL's Fort McMurray Oil Barons. Photo courtesy of Owen Reith

Owen Reith knows he has to be slick to excel as an Oil Baron, but he's done exactly that so far in 2017-18.

The Whistler product has gotten off to a hot start in his first season with the Alberta Junior Hockey League's Fort McMurray Oil Barons, as he's helped the club to the top of its division with just two losses in 12 games.

The key for the 18-year-old is to execute more quickly.

"You have less time with the puck than what you had in Jr. 'B' so that's the biggest thing I've found so far," he said.

Granted the opportunity to line up alongside Will Conley, the Oil Barons' leading scorer and offensive machine, Reith has had a chance to make an impact right away. He's taken advantage with two goals and five assists in 11 games, including a two-point effort last week as the Oil Barons handed the Okotoks Oilers their first loss of the season. All but one of his seven points has come from a connection with Conley.

"It's helped me adjust to the new league," he said of playing with some top linemates.

Reith's road to northern Alberta was a long one as he attended a series of Oil Barons' camps and passed through a number of hoops to earn a place on the team after being scouted at a showcase and being offered a chance to skate with the team's prospects.

"I came up for a camp in the summer and they said 'Come back to main camp,' and then I went through like that," he said.

Head coach Tom Keca said Reith's 2016-17 season with the Jr. 'B' Princeton Posse helped give him a jump on some other 18-year-olds who had only played midget.

"He's been great," he said. "He's already got a year of Jr. 'B' under his belt in a very good developmental league. It was a little less of a huge step (than from midget).

"He's an individual that works extremely hard, whether it's in practice, whether it's in dryland (training). He has one of those relentless work ethics that hopefully rubs off on a lot of our players."

Keca said Reith has already worked his way up into a trusted position, after showing determination in making the team, and capitalizing on every opportunity he's received thus far.

"He's not the prettiest skater, he's not the fastest guy, but he's always around the puck. We brought him to our July camp with our prospects. We brought him to main camp and got to see him a little bit more and he's earned a position on our team," Keca said. "He knows where to be and he distributes the puck well."

Reith knows he's just one part of a smooth machine that has the chance to earn Fort McMurray's first Gas Drive Cup as league champion since 2006.

"It's our depth. We have four lines that all play consistent every game," he said. "Everybody on the team works really, really well.

"We're consistent at both ends of the ice, we have two really good goalies and we have a good amount of scoring talent, too."