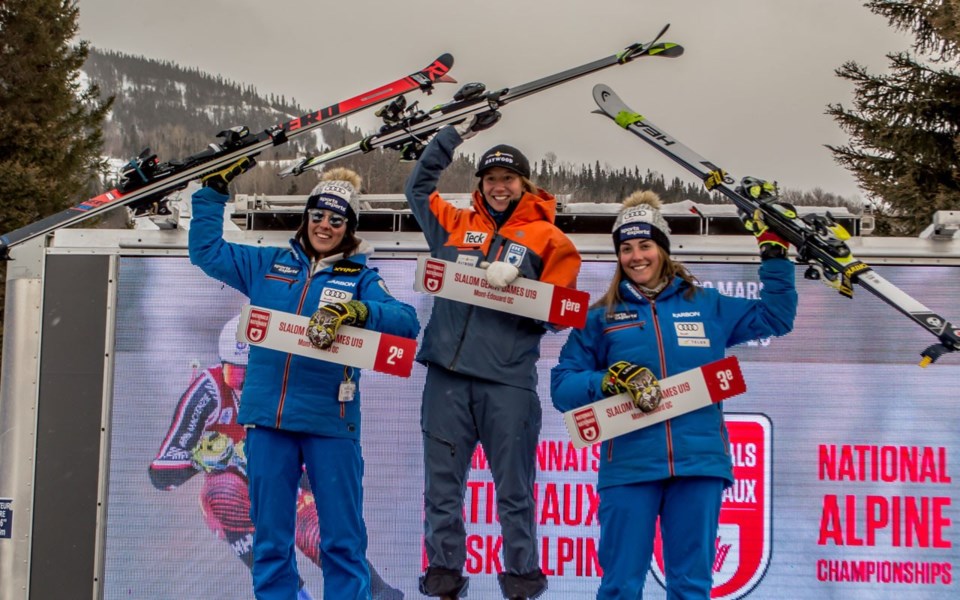 Renzoni hit the podium twice at U19 nationals, winning the giant slalom while earning third in the super-G in the Mont Edouard, Que. contests from March 24 to 28.

"It was pretty exciting as I didn't expect it. I knew I could (win) if I skied my best, and I did, so coming out with a win for U19 was awesome," she said.

As racers who have aged out of the U19 category are still allowed to participate, the 18-year-old Renzoni was fourth overall in both giant slalom and super-G, finishing behind World Cup mainstays Marie-Michele Gagnon and Laurence St-Germain in the former, placing 5.32 seconds back of overall winner Gagnon. In the latter, Renzoni was just 0.97 seconds back of winner Beatrix Lever.

"It was pretty cool just to have them there. Mich pulled out of the super-G last minute but she ran through the whole warmup and she was supposed to start just a few bibs ahead of me, so that was cool to see," she said.

The giant slalom course lived up to its moniker, Renzoni said, though she had to make more mental adjustments than physical ones to excel.

"It was the longest course we'd skied all year," she said. "Just having enough energy and pushing from top to bottom was key.

"I just had to focus on going all-out the whole time where others might have lost focus halfway through."

The nationals came at the tail end of a long road trip for Renzoni and her teammates, though she enjoyed soaking in the Quebecois culture while she was out there.

"I hadn't done downhill all year, and then having that experience was super fun because it was new to me and it kind of just kept me going," she recalled.

Right now, Renzoni is glad to be out west doing spring series at Panorama, including taking a giant slalom silver on April 6. The confidence boost from her nationals triumph is still on full display, and she hopes to retain it heading into the 2019-20 campaign.

"It gives me confidence going into next year knowing that I am competing with the top level in Canada for my age. Having that confidence in my back pocket makes me know that I can and hopefully will beat those people again," she said.