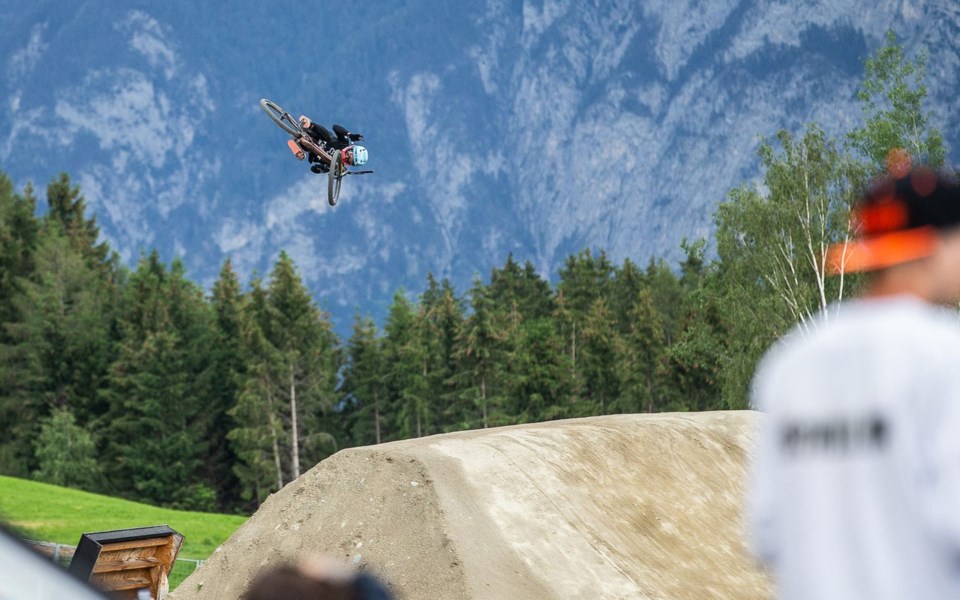 Brett Rheeder kept his dreams of a season sweep alive in Austria on June 16.

In the Crankworx Innsbruck Slopestyle, the Canadian went back and forth with Sweden's Emil Johansson over the course of two runs. Rheeder started with a clean 92 to lead the field after Run 1. Johansson bounced back from a failed first run to land a 95 and put the pressure on Rheeder, who found the extra half point he needed to claim the win after placing second the past two years.

"I've been in this position so many times," Rheeder said in a release. "I come down on my first run, I'm in first place. I get bumped into second and I don't get it back. I either crash or I screw up, or do a straight air, or all of the above."

While Rheeder didn't feel like his run was the best he could accomplish, it certainly impressed the judges.

After two events and heading into the final festival here in Whistler from Aug. 9 to 18, Canadian Vaea Verbeeck leads the Queen of Crankworx standings with 447 points to American Kialani Hines' 353 and Dutch rider Anneke Beerten's 341. In the King of Crankworx race, France's Tomas Lemoine boasts 380 points to Kiwi rider Keegan Wright's 322 and fellow Frenchman Adrien Loron's 311. Bas van Steenbergen is the top Canadian in fifth with 259 points.

Elsewhere at Crankworx, New Zealand's Brook MacDonald topped the iXS Innsbruck Downhill elite men's division by nipping countryman Edward Masters by 0.11 seconds, while Australia's Dean Lucas took third. Kirk McDowall was the top Canadian in 15th. As for the women, Australia's Tracey Hannah rode roughshod over the field, beating runner-up Camille Balanche of Switzerland by 8.02 seconds while another Swiss rider, Carina Cappelari, was third. Verbeeck was the top Canadian in fifth. In the amateur categories, Squamish's Jackson Goldstone cruised to a win of nearly eight seconds in the U17 men's division.

The 100% Dual Slalom was the event in which Verbeeck most greatly bolstered her Queen case, topping Hines in the final. In the small final, Beerten topped Great Britain's Danielle Beecroft for third. On the men's side, meanwhile, it was an all-American podium as Matthew Sterling knocked off Mitch Ropelato for gold and Luca Cometti topped New Zealand's Wright for third. Van Steenbergen was the top Canadian in sixth. Jackson Goldstone won the youth male category while sister Bailey was second in the amateur female contest.

Lastly, in the RockShox Innsbruck Pump Track Challenge, France topped the U.S. in both men's finals as Loron bested Austin Warren for gold and Lemoine downed Kyle Strait for bronze with van Steenbergen winding up eighth. On the women's side, Hines took down France's Mathilde Bernard in the final while young Austrian Vanessa Kager emerged to take down Beerten in the small final.