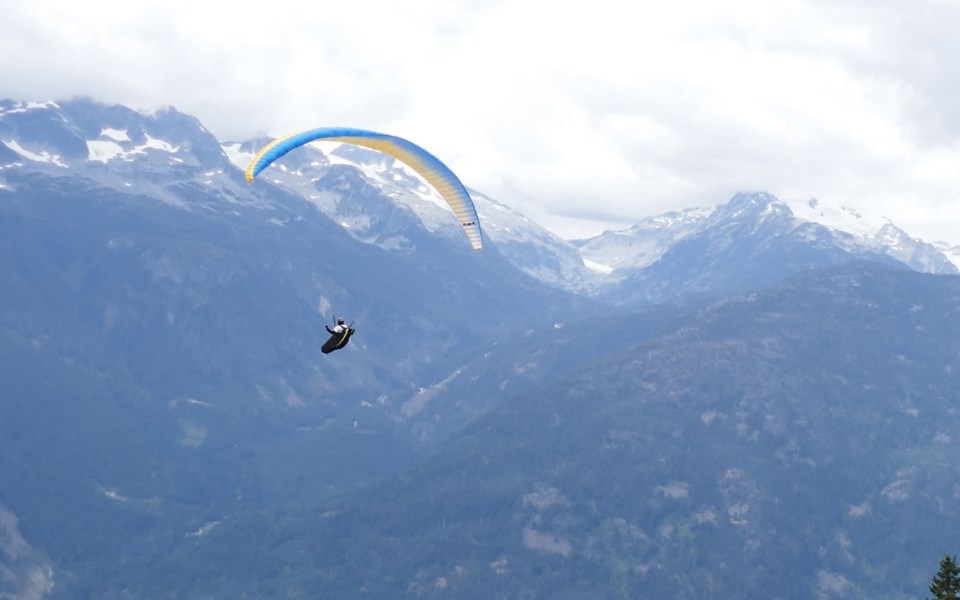 THREE FOR THREE Even in a pandemic, the third Pemberton Aerothlon went off well. Photo by Peter Chrzanowski

Austin Ross might be most closely associated with skiing and other winter fun, but for those unaware, he served notice that he’s full of summer skill as well.

In his Pemberton Aerothlon debut on Aug. 30, Ross came away with the singles victory by edging out Peter Lister.

Ross tends to shy away from competitions, recalling his most recent contests were ski racing and cross-country running as a teenager, but talked himself into registering in the week leading up to the event. Though he partakes recreationally in all three sports that make up the Aerothlon—paragliding, mountain biking and trail running—doing it all back-to-back-to-back made for an interesting experience.

“I’d personally never done anything like that,” said Ross, who lives near Pemberton’s One Mile Lake and is able to access all three sports without using a vehicle. “It was really cool to get back in the headspace of a competition and really be pushing it.

“It involved three of the activities that I do on a daily basis here in Pemberton, so it would be silly not to sign up.”

The Aerothlon itself provided its share of challenges, especially to start, as the wind didn’t cooperate for the gliding portion.

“The one day we had planned for this event, the wind wasn’t ideal,” he said. “The majority of the pilots did end up flying. We just waited for an hour or so until the sun came over the mountains.

“We were able to do it safely and it worked out well.”

Despite being “rowdy,” Ross’ flight mostly went well, though he stopped a few minutes’ trek from the landing site, which was further from the typical touchdown place near Pemberton Meadows Road.

“We were flying into a headwind, so it made it difficult to get all the way to the landing zone. A few people did, but I came up short,” he said.

During the bike section, the sun had stopped beating down, situated behind some clouds, and the rain held off until after the run was completed.

There was some confusion determining the winner, though it was eventually determined Ross’ time bested Lister’s after consulting airtribune.com data.

“I knew personally that I gave it my all. I pushed myself mentally and physically, and I did a good job,” Ross said. “Anyone who completed this is definitely on the winning side.”

Organizer Peter Chrzanowski said plans were complicated by the absence of organizing partner Pablo Renato, who is based in Mexico. Onsite, the timing was completed by hand, though the digital data was later used to determine the champs.

Just over 30 participants registered to take part in the contest in one of the three divisions: singles, duo team or three-person relay. Vincent Pagot, Remy Guignard and Peter Cagasek won the relay while Luke Myers and Marcin Zmudzinski took home the duo team victory.

As well, eight core volunteers helped make the event run, according to Chrzanowski.

However, doing the bulk of the administrative work himself is a load for Chrzanowski, who appreciates the support of local businesses.

“The prizes helped smooth everything over,” he said. “I knew there were shortcomings because we were understaffed.”

Chrzanowski said he’s considering alternating hosting duties with Chilliwack starting next year, as the event could utilize a gondola under construction near Bridal Falls.

“That would give me more room to breathe, have more time to do it,” he said.

Chrzanowski has long hoped to connect with a company like Telus or Rogers to help bring the sport to a wider audience, but with other iterations of the Aerothlon expanding to Austria, there’s also hope to land a coveted connection with Red Bull down the line.

As well, Chrzanowski was happy with how the event ran in terms of following safety protocols related to the ongoing COVID-19 pandemic, and feels it could be used as an inspiration for others looking to hold small contests in the current climate.

“There’s hope, still. You can do these events outside. You can socially distance and you can still have fun. You just have to be reasonable,” he said. “You don’t have a big party after. You wear masks in vehicles and don’t slobber over each other, basically.