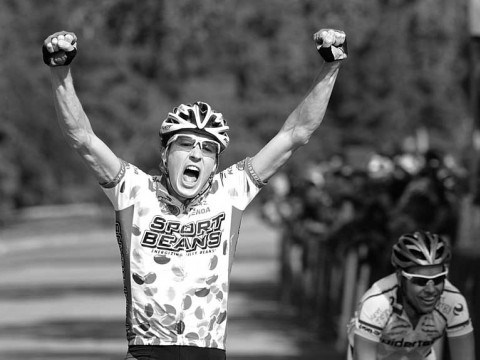 Will Routley didn't have a team to support him Saturday at the 2010 Canadian Road Cycling Championships in Edmonton, and he was up against a tough field of pro riders - including many of his former teammates with Symmetric Cycling and Olympians from 2008. Despite these challenges Routley came into the race with a strategy and a lot of confidence after a strong early season with his pro team, Team Jelly Belly presented by Kenda, and a strong performance at the Tour de Beauce in Quebec the previous week as a member of Team Canada.

The result was Routley's first senior national road title and his first national title on a bike since he made the move to road from mountain biking coming out of high school.

"It feels bloody good," said Routley from his new digs in Abbotsford. "I think this is the best result ever for me. It means the most and it was the most exciting, and the nationals were a tough fought race.

While the national championship is usually a sprint from start to finish Canada's only pro team, team SpiderTech presented by Planet Energy, brought 12 riders to the race and team tactics were very much in play. As well, several Canadian riders with U.S. teams turned up and also worked together to split up the field.

Routley knew it would be tough, but forced himself to sit back until he figured out what the other riders were planning as the 182-km race unfolded.

"It was an aggressive race right from the get-go, which was really good for me - I was hoping it would be a harder, more aggressive day because that's where I seem to do the best recently. I was able to sit back the first couple of laps and observe how other people were going to race and see how things were looking."

Routley says he was a spectator for the first hour or so, then moved his way to the front where he made sure to get into the first breakaway with nine other riders.

"They were establishing a good gap, but I was able to seize the moment and bridge across by myself and leave the rest of the pack behind," he said.

Once he was in the lead group Routley turned up the intensity and made sure he was in a good position for the final sprint.

"There were just two of us at the finish," he said. "I tried to attack (Andrew) Randell (of SpiderTech) on the last climb, but he had legs left and was able to stay with me. And then it was just the two of us rolling into the finish. I just tried to ride fast enough to stay ahead of him and the eight or nine guys behind me and I was able to make it across."

Routley estimates he had three-quarters of bike length on Randell at the finish.

"I was pretty ecstatic, this was a big one for me," he said. "I've been trying to get a nationals win for a long time, so I was screaming my head off across that line. It was emotional and exciting, and I was holding back a few tears afterwards. It was a big day."

Routley and Randell finished the race in 4:20:16 with a 12 second gap on the next group, led by SpiderTech's Bruno Langlois. The leaders averaged close to 42 km/h from the start.

While Routley is already at the top of his game and has tour wins in Thailand and Korea under his belt with his pro team - plus a jersey from the more recent Tour of California - a win at the road nationals is a big step for the 27 year old.

It all but secured him a place with the national team for the Commonwealth Games in India at the end of the summer, and the Pan-Am Games are coming up in Mexico in 2011. Both events could be stepping stones for Routley heading into the 2012 Olympic selections. It will be tough considering the calibre of riders he'll be up against, but a nationals win puts him in the lead group of contenders.

As well, Routley says a win at the nationals against a strong field of pro riders will help his resume, which in turn might help him advance to the next level of his sport - a spot with a Pro Tour team that competes in the top events like the Tour de France.

"I'm definitely thinking I'd like to have a crack at the highest level of the sport, which would mean more racing in Europe, more Pro Tour events, and maybe even the Tour de France," he said. "You really have to take it one step at a time, but that's where I'm at. I really feel like I'm a late bloomer, in that I'm still learning and improving, and I'm still going to be improving for the next couple of years."

Meanwhile, Routley is taking a break to recuperate from his spring season.

"My form was good this week and I had a good week at Beauce, but I think I'm fighting a little bit of fatigue - there have been a lot of race days, a lot of flights and time changes and it's been a long season. But I have some time to recover at home now before the next block of racing in the fall. I may even be able to get in a little training, as opposed to racing and recovering."

Routley's idea of resting includes taking part in the Tour de Gastown in Vancouver on Canada Day, an event that kicks off Superweek. Over 50,000 people are expected to come out to watch and cheer on the riders. After that Routley says he will likely take part in the Tour de Delta, but may miss the Tour de White Rock if he gets a spot with Jelly Belly on a team that's heading to China.

"I'm really enjoying the riding right now. There were certainly a few times when I thought I was done, but I stuck with it," said Routley. "That's just the nature of (the sport). It takes a long time."