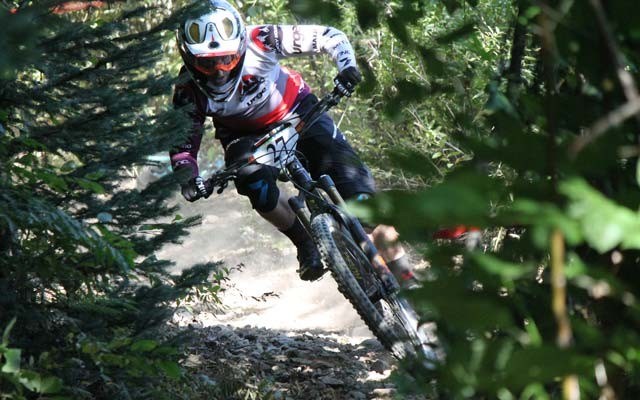 OUT OF THE WOODS Whistler's Jesse Melamned took a second-place showing a the SRAM Canadian Open Enduro on Aug. 14. Photo by Dan Falloon

A costly flat early on made it seem like the Connecticut rider was en route to a second consecutive disappointing finish in Enduro World Series (EWS) action, but the overall series leader rebounded and pulled out a win at the SRAM Canadian Open Enduro on Aug. 14.

The resurrection came at the cost of local rider Jesse Melamed, who claimed the race leader's hot seat quickly as an early finisher, fended off challenger after challenger until Rude, the last of the day to descend into Whistler Village.

Melamed acknowledged he had visions of gold while waiting for the final results to come in, and even when Rude's day seems dead and buried, the proverbial zombie can still emerge.

"I heard Richie flatted and so Martin (Maes), after he came down, I thought I had it," he said. "(With) Richie, I count it as a win because what can I do against him? What can anyone do against him?"

Melamed, though denied in his bid to capture the big one in front of an adoring crowd, still easily beat his career-best sixth, also set at Whistler in 2013, and claimed his first EWS podium.

Sitting on the hot seat, Melamed managed to hold off a stiff challenge from Vancouver resident Josh Carlson, finding himself 1.52 seconds clear.

"It was hot, actually. That sun was pretty hot," Melamed said of sitting in the top spot. "It was pretty nerve-wracking."

But Rude, behind the eight ball after his Stage 2 flat, made up plenty of time by winning the next three stages, including the final one from Top of the World by nearly 15 seconds. The win, by roughly seven seconds over Melamed, was his fourth in six outings this year and helped to extend his overall lead to 330 points over Damien Oton.

"Stage 2 was going well and then I flatted. I thought it was kind of over then," he said. "We had three more stages left and I tried to pull through and stay focused.

"You go through the whole day and then you've still got to remember you've got a 20-minute stage at the end. You can lose minutes or you can make up 30 seconds."

Rude felt confident going into the final stage, a 12-kilometre monster with 1,530 metres of descending, holding a refined strategy in place to dominate it.

"I always knew I was good at that stage, so I had to go at my pace and just go as fast as I could. I was pretty tired the whole way down. It was hard," he said. "You've got to rest when you can and when you know there's a pedalling session, you've got to better yourself."

Though the race was in Melamed's backyard, he noted the locale didn't give him as much of an advantage as one might think. The former cross-country rider prefers the Valley Trail to the bike park and noted a couple other stages were new terrain to him.

"Stage 4 I've ridden once and Stage 3, I'd never ridden," he said. "To do this good result on trails I don't know perfectly, I'm pretty happy with."

For his podium finish, Melamed received full-throated cheers from the crush of spectators in Skier's Plaza. His parents were front and centre, and he took numerous selfies with fans from the finish corral. To do it at home was a joy.

"I have friends from high school all here and to race in front of them is pretty special," he said.

Carlson, meanwhile, also failed to escape unscathed on his way to the podium. Though disappointing, his wipeout spurred him on in its own way.

"Once I crashed on Stage 4, it made me hit the reset button. I got real angry and grumpy and I had to make it happen to pull the time back," he said.

In the face of his emotions, Carlson managed to play Stage 5 wisely and take a second-place showing in that "gnarly" section that "encapsulates everything about enduro."

On the women's side, the Cecile Ravanel show continued as to make mincemeat of her competition. Ravanel, seeking her first EWS overall title, knocked off runner-up and fellow Frenchwoman Isabeau Coudurier by 56.5 seconds and Canadian Casey Brown by just over a full minute.

Like Rude, Ravanel had a bit of a rough start before roaring back to win the final three stages.

"It was a tough day for me. I had mechanical problems in Stage 1 and lost four seconds off the lead. I flatted in Stage 2 and lost 47 seconds," she said. "Onto Stage 3, I gave it full gas like a cross-country race. I arrived one minute before my start and I was totally tired."

Even though she won Stage 3, Ravanel said she didn't feel her best, and recovered for the last two sections.

"It's big and long and I pedaled all the time," she said. "I said 'No regrets' and at the end, it was a happy ending."

Not surprisingly, Ravanel has the overall lead on the strength of five wins and a second-place showing in her lone non-triumph. She holds a 370-lead, nearly the value of a 400-point first-place showing, over Coudurier.

Full results are available on www.crankworx.com.