A safe place to skate 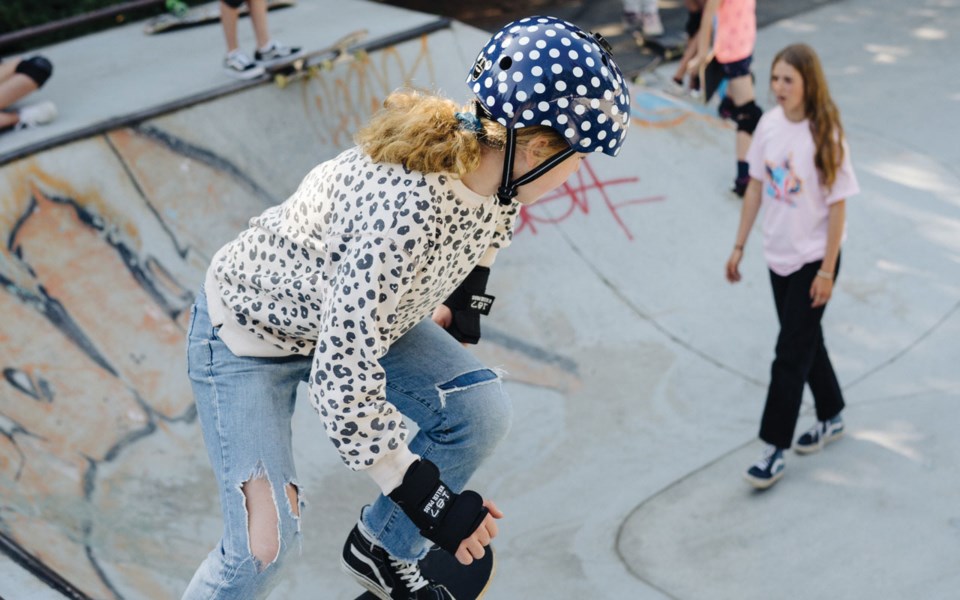 DROPPING IN Getting girls to feel safe entering the skate park was a major focus of girls-only jams organized by the Pelchat sisters this summer. Photo by Aga Iwanicka

If you popped by the Whistler Skateboard Park on a Friday morning this summer, things might have looked a little bit different.

That’s because many of those riding were girls and women, thanks to the skate jams organized by the Pelchat sisters: Juliette, 15, and Amalia, 12.

The sisters took inspiration from their own journeys in the sport and sought to make it more accessible for others.

“[We] started coming to skate parks a couple of years ago and we realized that there weren’t many girls coming,” Juliette said. “We were intimidated when we were starting and, this year, we started seeing a couple more girls showing up to the skate park, but [they] also looked like they were intimidated.

“We decided to hold an event to lessen their intimidation, get them more confident at riding the skate park, and get them more stoked to ride with other girls.”

Creating that community of girls, they reasoned, helps to foster a more comfortable space that makes it easier to try and fall down, but eventually, succeed.

“It’s less intimidating for young girls when there are a lot of girls around and they’re learning, too,” Juliette said. “We created a safe environment for them to learn.”

Word of the jams got around quickly, as they hit the ground running from the get-go.

“But 25 showed up. They were so stoked on coming out there,” Juliette added.

From there, as the Pelchats shared the jams on social media and parents spread the news through word of mouth, the summer culminated with roughly 60 participants coming out on Sept. 4.

The two-hour jams were split by age, with the first half for younger skaters and the second for older attendees. The sisters enlisted three other coaches to help, including local national team member Maddy Balt, who also lent her expertise to a camp in Pemberton (“Olympic hopefuls boost Pemberton skate camp,” Pique, Sept. 10, 2020), as well as Maggie Crompton and Takaya Maynard.

The sessions started with the coaches asking girls their goals, would help them achieve those marks, and then asked them to come back with something new they wanted to accomplish the following week.

“There were a bunch of girls who came weekly and kept improving,” Juliette said. “We would [each] focus on an area of the skate park and if the girls wanted to learn something, they would come to that area.”

“Some of the girls got so good and now they can skateboard with us, so that’s super cool,” Amalia added.

Most participants fell in the five-to-13 age range, though there were some teenagers and even some adult women returning to the sport.

The jams even quickly landed sponsorship from brands such as The Circle Kids and CLIF Bar, while developer Beau Jarvis helped the girls make T-shirts to sell by donation in support of Skate Like A Girl, a non-profit that looks to empower girls through the sport.

In addition to growing as a coach, Juliette—a two-time national junior slopestyle snowboard champion—felt like she progressed as an athlete throughout the process as well.

“How we’ve seen them learn so quickly has motivated me to push a little bit harder and want to learn things as fast as them because they were so encouraging as well,” she said.

The sisters hope to run the jams in the future, including hosting a contest at the end of the summer next year.