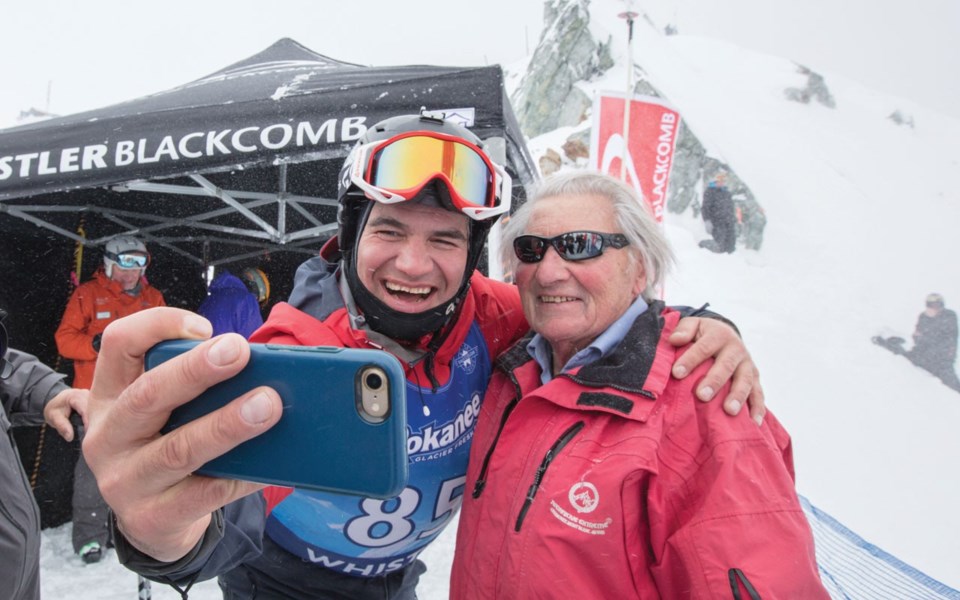 With the support of legendary Swiss extreme skier Sylvain Saudan, who watched from the top of the course, the Saudan Couloir Ski Race Extreme made its triumphant return on Saturday, April 14 after a 17-year hiatus.

Taking a course that saw racers zigzag down the face of the couloir, onto Blowdown, and into Jersey Cream, participants ended the race near the entrance of the Jersey Cream Express.

Finishing the race at an impressive two minutes, 16.36 seconds (2:16.36), Whistler product Stan Rey took home top spot in the men's pro division. The runner-up, Jordy Norris, was 0.96 seconds back, and third place went to Hayden Sidey-Phillips, who was just over five seconds off the pace.

"I've never raced it. I always wanted to when I was a kid, but I never had a chance to. And now that it's back, I was stoked to be able to be a part of it," said Rey, who raced on a brand-new pair of 193 giant slalom skis.

As the 18th racer down the course, by the time Rey dropped in, the berms were already massive.

A freeskier with a racing pedigree, Rey drew on his ski-cross background to rally through them.

"You kind of had to come up the berm and dive into the turn and ride it like a luge track until you got on the groomed stuff," said Rey.

The legendary race saw its fair share of carnage, with many going down at the top.

A few of the pro men, however, tumbled near the bottom, as they tried to shave seconds off their times.

Robbie Dixon, a recently retired World Cup competitor who was a favourite in the competition, blew out within sight of the finish line.

"I guess I still got the heat—but my legs and my belly can't keep up, apparently," he said, drawing a big laugh. "I have to go back to the gym, less Kokanees!"

On the women's side, Marie-Pier Préfontaine took top spot in the pro category, finishing the course in 2:24.46, ahead of second-place finisher Brynne Benbow, who finished in 2:37.09. Jane Emerick, meanwhile, took third.

"It was really fun. It's a fun event and people are super stoked," said Préfontaine.

Having spent 10 years on the national ski team, Préfontaine said that once racers got through the top—the "sketch" part—the course was a lot like a giant slalom race.

"It's really similar. Onto the flats and towards the end, it's pretty much the same thing," she said.

Featuring over 150 participants and a wide range of ages, the race was declared a great success, with many first-timers saying it was something they'd always dreamed of crossing off their bucket list.

One of those first-timers was Pete Sonntag, Whistler Blackcomb's chief operating officer. Speaking to Pique near the finish line, Sonntag said that, as a race forerunner, his job was to ski the run cleanly and come down in one piece.

"I accomplished most of that!" he said, explaining that he hit compression at the end of the Couloir section of the course that resulted in a "front somersault."

"Fortunately, the snow was soft," said Sonntag, clearly stoked to be part of the race.

"It's awesome—this race is legendary around the ski world—and it's a privilege to be able to bring it back to the local community."

The course also brought out plenty of Whistler legends.

As written about in Pique's recent cover story on the legendary event, back in the day Chris Winter entered the race with a giant backflip off the cornice. When asked if he considered it this time around, Winter smiled and laughed. "Even if I wanted to I couldn't have, because the start gate was on the lip—but that would have been fun," he said.

The race had a similar vibe to its original runnings, said Winter, who noted that there was a wide range of people involved. "There's a lot of people in their mid-30s and 40s. It's not a young man's sport anymore," he said.

Winter said he was thrilled that Saudan was onhand to watch it all go down. In the 1990s, Saudan—who is dubbed "skier of the impossible" for taking on some of the world's gnarliest runs in the 1960s and '70s—took Whistler Blackcomb to court, suing the mountain for naming the race after him without his permission or knowledge.

The case was settled out of court and Saudan's name was dropped from the title.

Bringing Saudan back onboard was a priority of Whistler Blackcomb's new owners, Vail Resorts.

For Winter, having Saudan onhand, giving pats on the back and words of encouragement through broken English, was a big boost to the race.

"The fact that he's here, hanging out at the top is pretty cool," said Winter. "He's just hanging out—feeling the vibe."

Wearing a throwback red ski coat and sunglasses, Saudan was clearly stoked to be at the race.

On a personal level, he said he was touched by the reception he's received.

"It's been great to be here. People are incredibly nice and open. This is great day in my life," Saudan said.

See the full results at www.wssf.com.