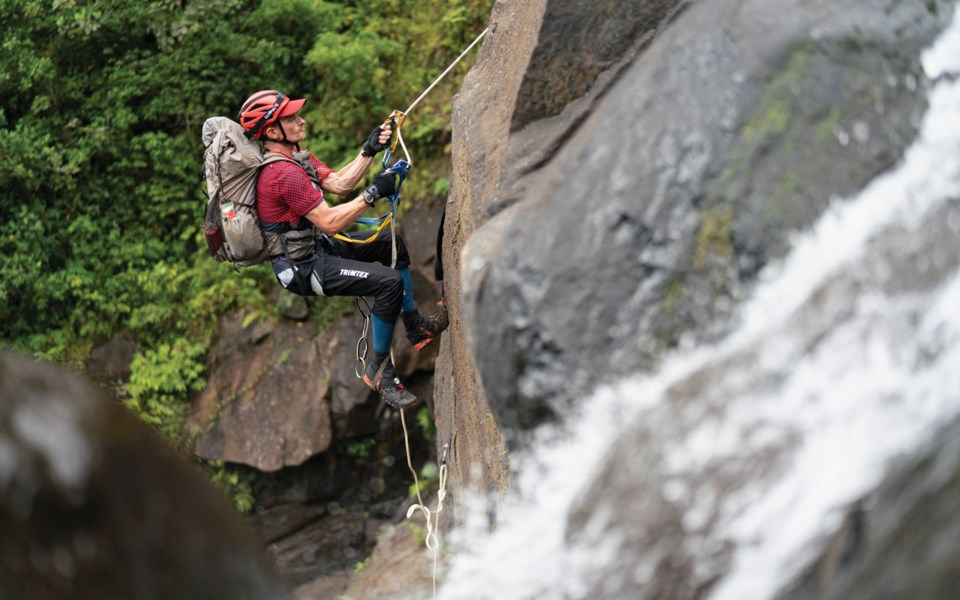 You often see Fiji marketed as the perfect getaway for weary travellers looking to unplug with untouched, sandy beaches and tranquil, turquoise waters. But for the 66 teams that competed in last summer’s Eco-Challenge, a gruelling, multi-sport endurance race through treacherous jungle, mountain and ocean, Fiji was anything but a vacation.

“The Eco-Challenge, like the name implies, is the world’s toughest race,” said Whistlerite and race director Kevin Hodder. “The Fiji course was 671 kilometres of self-propelled travel, to give you an idea of how long and gruelling it is. Think of it as kind of like a scavenger hunt on steroids.”

The focus of a 10-part Amazon Prime docuseries hosted by famed British adventurer Bear Grylls and produced by Survivor and The Apprentice creator Mark Burnett (we’ll forgive him for that last one), the Eco-Challenge includes a cavalcade of Sea to Sky participants, from athletes to crew. Four of the competing teams feature Sea to Sky residents—racers Jen Segger, Eduardo Baldioceda, Mark Sky and Ben Kwiatkowski, as well as assistant crew member Laure Lejeune—along with Hodder, technical race director Scott Flavelle of Pemberton, and former Whistler Mountain Bike Park manager Brian Finestone, who was tapped to organize the bike leg of the race. Dozens more from the corridor helped out behind the scenes.

“The reason people live in the Sea to Sky corridor, in most cases, is the reason why they would be valuable crew members for the Eco-Challenge,” Hodder mused. “They’re used to pushing themselves in the outdoors, managing risk in the outdoors, being able to move efficiently in the outdoors.”

Calling the Eco-Challenge the world’s toughest race is no hyperbole, either: the course remains open 24 hours a day for 10-and-a-half days, and competitors are required to hike, bike, climb, canoe and sail through the painstaking course, navigating their own way with map and compass. One leg of the race even had the competitors sail a camakau, a small, traditional outrigger that Pacific Islanders originally used to migrate to Fiji.

Navigating the team dynamic is another challenge in itself, as teams are disqualified if any one of their members is unable to complete the race due to injury or illness. But the bond the groups form through such a harrowing ordeal can’t be replicated, Hodder noted.

“You see it at the finish line,” he said. “People just cling to each other and you hear them exclaim how they are now considered family members and they will remember these moments for the rest of their lives. They’ve shared something together that has changed the fibre of their being.”

The Eco-Challenge originally aired on TV between 1995 and 2002 from locales around the world, before going on a 17-year hiatus. Generally regarded as the genesis of adventure-based reality TV, Burnett decided to resurrect the race and series for a modern audience. But lest you think Burnett is up to his usual reality-show tricks, Hodder said there was no need for producers to manufacture tension when the race itself was such a wellspring of human drama.

“The jungle in Fiji, the ocean in Fiji, the rock-climbing route up the waterfalls that we designed in Fiji, those were stressors enough to organically create the amazing human dynamics we witnessed there,” he explained. “I think it’s good timing for people to watch a series about people working together and striving for a very ambitious goal, and in some cases, people being successful in achieving that goal, and other times, people falling short but learning a lot of life lessons in the process.”