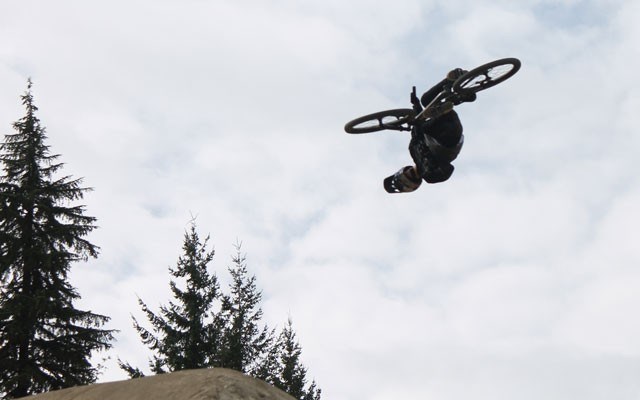 If you were a few moments late to Red Bull Joyride on Sunday, Aug. 20, you missed the winning run.

Dropping first, Whistler's Brandon Semenuk set the bar immediately, pulling off a backflip double tailwhip and a cork 720 before landing an opposite cork 720 on the first three features.

"That was a part of the strategy, to get a good run in the bag and then hopefully everyone has to reach outside their comfort zone," he said. "I did miss some things and I left the window open a little bit, but it was still enough to hold it down at the end of the day."

Also important was landing the half-cab on the drop-in after he failed to make it in 2016, ultimately placing 14th. Though he'd won in 2011 and three straight from 2013 to 2015, Semenuk didn't rank one win ahead of the other.

"It's always awesome to take the win here. It never gets easier," he said. "This one is just as important as all the others."

Semenuk had taken much of the year away from slopestyle competition to film and race rally cars, but when he lined up at a course he seems to own, he looked perfectly up to speed with other riders who had hit other spots on the Crankworx and Freeride Mountain Bike world tours. Semenuk explained a lot of the tricks he does for videos don't necessarily translate to competition, but he still managed to pull off an innovative run that impressed the judges.

"Having variety and big tricks on everything all the way down (was important)," he said. "Some guys had bigger tricks, but they just missed spots. It was getting a complete run that made the difference."

Semenuk's biggest push came from Swedish phenom Emil Johansson, who at just 18 found himself on the podium in second spot, a year after narrowly missing the medals in fourth. Johansson's 86.8 was also good enough to secure the overall Crankworx World Tour slopestyle title and the accompanying $25,000 prize.

Johansson's hallmark this season was consistency and it showed at Joyride as he and American Ryan Nyquist were the only two riders to break 80 points in both runs. The first half of the event saw 10 of the 18 riders fail to make it down the course without a stoppage.

"It's really tough. A lot of riders didn't even make it down today," Johansson said. "Some people get really nervous, but I'm just trying to keep myself calm because being nervous doesn't help me."

With a guaranteed silver by the time he dropped for his second run, Johansson sought to top it and reach for a higher score. However, he fell just short after acknowledging he misjudged the wind heading into the four-pack of jumps, going too far on the first jump and being unable to set himself up how he'd have liked.

Still, "Man, I'm second. I don't even know what to say. It's way better than I thought it was going to be," Johansson said.

"(Semenuk) did a super-good run, but me, I'm 18. I don't compare myself to the top ones," he said. "It's more me versus the run than me versus Brandon or anybody else. I know what I want to do before the contest starts."

"Hard work pays off," he added. "I've been consistent, which is good. That's the way I like it. I want to do stuff I know I can do, and for me right now, that's what works."

In only his second trip to Crankworx after pivoting to slopestyle in 2015, the 38-year-old BMX legend put it all together after a battle with Surrey's Anthony Messere.

Nyquist sat in third after the first run, but was bumped off the podium when Messere ripped his second chance. However, with the ante upped, Nyquist came through to take bronze by 0.6 points.

"This is the first time all year that I've stuck my first run. Usually I have some kind of crash or bobble that keeps me from getting a good score first and it adds pressure. When you're at Joyride, the pressure's already insanely high, so I was lucky to be able to get that first run in," he said.

Like Johansson, Nyquist knew he couldn't finish any lower than he already was — in this case, fourth — and appreciated seeing those ahead of him try to top him.

"Anthony Messere totally knocked me out with a heater run, and I would have been totally OK if I was fourth. At that point, I got my run in and the score was holding," he said.

However, when he was getting ready to drop in, and after seeing all but Johansson and Semenuk, Nyquist opted to "lay it on the line" and push for a medal.

"I had just bobbled a couple things in the first run and I just wanted to get that initial planned first run out," he said.

For the third year it was offered, no rider was able to claim the Triple Crown of Slopestyle, leaving the $25,000 prize on the table. American Nicholi Rogatkin was in contention this year after winning in Rotorua and Innsbruck, but fell late in his first run, limiting himself to a 44.0 score. On his second run, the loud pop of a flat tire after landing a jump officially ended his candidacy as he placed 14th. Defending champion Brett Rheeder also had a tough day with a best run of only 33.6.

On his Facebook page, Rogatkin posted a GoPro video of his first run with the caption: "Rough one for me. Thanks for the support Whistler, crazy vibe on the mountain today."