Semenuk's Sunday Joyride in the park 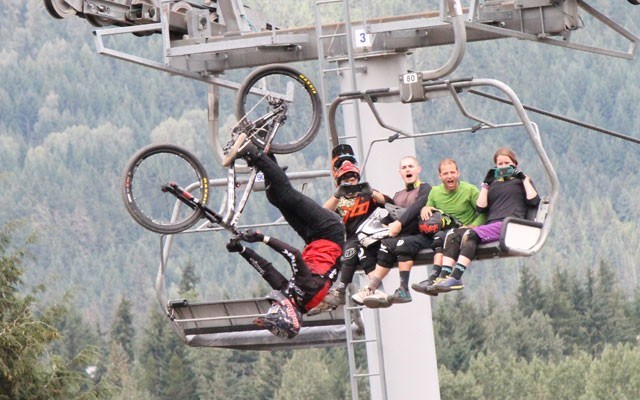 STUNNING SEMENUK Fans on the chairlift got a front-row seat of Brandon Semenuk's winning run at the Red Bull Joyride on Aug. 16. Photo by Dan Falloon

A major part of Brandon Semenuk's appeal is that at his best, he makes slopestyle look effortless.

The 2015 edition of the Red Bull Joyride provided myriad challenges to Semenuk, but once he lined up at the start, he was unfazed by every obstacle thrown his way.

That included a rider on a mission in fellow Canadian Brett Rheeder, who had a shot at the Triple Crown of Slopestyle and the $25,000 prize that went with it.

It also meant psyching himself up for a second day in a row at the Crankworx marquee event. The Joyride was originally slated for Saturday, Aug. 15, but after a day of training, only two riders went down the start gate before the heavens opened and soaked the course. Not enough daylight would have remained to get in every run.

And, of course, Semenuk had a target on his back as a three-time winner of the event, including the past two. He hadn't pulled down a gold in 2015, though, which was something he was keen to rectify.

Still, Semenuk came out like he had nary a care in the world on Sunday, leaving the crowd cheering and the judges impressed enough to give him a 93.80 that put the pressure on the rest of the field.

"To finally get this, to feel like I could put a good run down the hill, feels so good," he said. "It was so stressful. There were two events (earlier in the year) where I felt good in practice but I wasn't feeling like I was riding my best on the day of the event.

"This was my last chance. I so badly wanted to put it together. I was so stressed about it."

Even though Semenuk had a couple rough events this season at a time Rheeder excelled, he always felt he could overcome slopestyle's breakout star. Though he acknowledged his run wasn't picture perfect — "there was a couple things I actually missed" — he was still thrilled with how it played out and knows there's still room to grow.

"I went into my run, and the start of my run was going good and it kept unfolding. It was pretty much what I was looking for — put the pressure on everybody and I knew that it was enough pressure that everyone would have to step outside of their comfort zone. To get a good run and have it hold up, words can't describe it," he said. "There are still some things in the bag, but I'm still pretty happy with it. It was close enough to what I was looking for."

"It's the biggest for me. Every one of those wins (at Crankworx Whistler) is the biggest one I've had," he said.

Semenuk explained the course, while still a bit wet, was similar to what competitors would have tackled Saturday afternoon had the competition eventually gone forward. The bigger challenge, he noted, was the morning start especially after getting amped up the day prior.

"It was good conditions this morning, but was definitely tough on everybody just because we were so tired in the morning sprinting down the course," he said. "It's really exhausting getting in that headspace. You finish your last practice run and you know you're going to head up and do your run. For all that to go down, you're so ready, and then that's over, it kind of drains you a bit.

"To wake up the next morning and have to go through that all again, it's really tough on you."

Nicholi Rogatkin, meanwhile, shook off a flat tire in his first run to come back with a 90.40 for second place while 2012 champion Thomas Genon also put up a strong second run to finish third with an 88.00.

"The field out here is stacked. This is the epitome of mountain biking, the most epic event of the year. We've got the best guys here, the best course," Rogatkin, of Lincoln, Mass., said. "To finish second at the end of the day, it's almost too good to be true."

Rogatkin, who sat 17th after the first run, came out early in his do-over and set down the gauntlet for the rest of the podium. He said in particular, his cash roll was sketchy in the first run, so to land it when given another chance was gratifying.

"Having to go back and do all my tricks again, it was super stressful," the 19-year-old said. "It almost didn't feel real in the moment they told me to drop. From so much stress to so much relief and satisfaction when I got to the bottom, it's an amazing feeling."

Rheeder, meanwhile, went down on both his runs to see his Triple Crown dreams dashed. Still, with two wins in the bag, Rheeder did claim a $25,000 prize as the world tour champion.

Rheeder said after the race he was dealing with an illness in the two days leading up to the race and was trying to turn in a strong performance without much in the tank.

"I wasn't in a good headspace, but I rode practice and I felt pretty good," he said. "I really thought that I could pull it together, but we're all human, right?"

Still, with as much on the line as there was, Rheeder felt he had enough inside of him to win.

"I had a run that I believed could have been the first-place run," he said. "My strategy was just to try to block everything out and make it to the bottom."

Going into 2016, Rheeder believes he'll be more driven than ever. The fuel didn't hit the present fire immediately though as he was more on the burned-out end of things.

"I think the motivation will hit me a little later," he said. "Right now, I'm more bummed than anything."