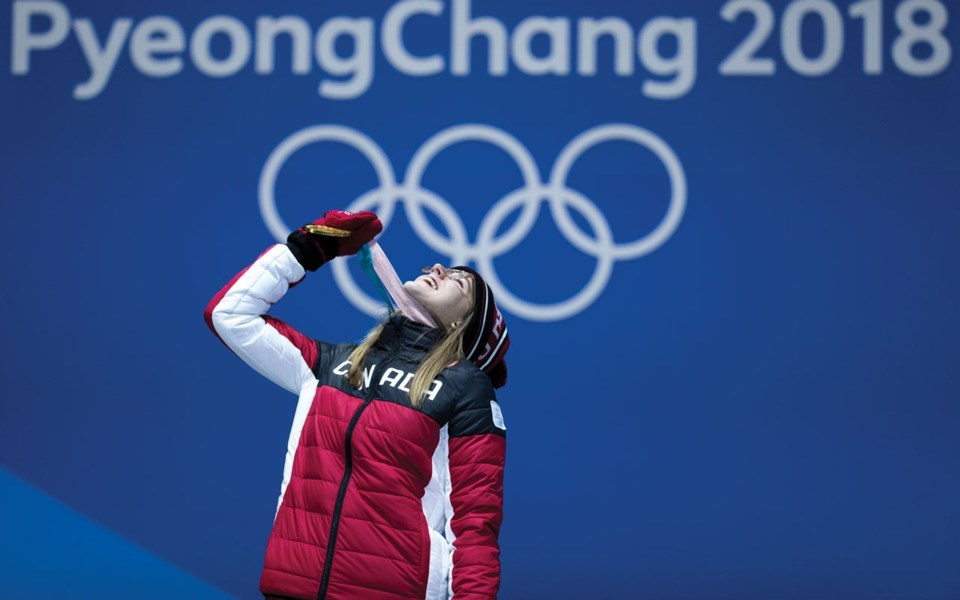 Cassie Sharpe entered the women's halfpipe ski event at the 2018 Winter Olympic Games as the favourite and proved she was more than worthy of the mantle every step of the way.

Coming into finals as the top qualifier (93.40), Sharpe stomped her first run with a 94.40, only to improve on it next time around. The 25-year-old took a new approach to the course and found even more points, claiming gold with a 95.80.

"After I landed my first run, which for me was my safety run, I was confident and I was stoked. I had (already) put down one good run but I was nervous, obviously," she said, speaking to Pique from South Korea.

"It's a huge contest, but I had put in so much time and effort and hours into getting consistent with this run. Landing that 1080 at the end was something I dreamed of doing here. I was nervous for it, but I was also confident in my ability to put it down."

France's Marie Martinod was her nearest challenger with a 92.60, while American Brita Sigourney took home the bronze with a 91.60. Roz Groenewoud of Calgary placed 10th, putting down three clean runs with a broken arm.

Between qualifiers and finals, Sharpe threw down four runs no other skier could match. The only other run she was scored on was her victory lap. Still, she never felt like she had clinched the gold until the very end.

"It was insane. I felt really consistent and I felt confident. I felt really good going into it. The other girls were riding so well. I think that might have been one of the best contests for women's halfpipe skiing ever, and I'm just so glad we got to showcase that to the world on the biggest stage," Sharpe said. "Any girl at any time could put down her best run or land something that I didn't even know she could do and they could take it.

"It was so nail-biting up at the top watching everyone drop until that last run. Marie put down a 10 that I'd never really seen her do before, so I was nervous with that as well."

Speaking roughly 24 hours after clinching gold, Sharpe said the day was a blur as she faced a flurry of interviews sandwiched around small portions of family time and sleep."It's been go, go, go, but it's been amazing," she said.

In the men's halfpipe, Simon d'Artois suffered heartbreak as he narrowly missed making the finals, finishing in 13th place. The top 12 skiers advance.

Meanwhile, in slopestyle, Whistler resident Teal Harle finished only 2.4 points out of the medals after posting an even 90 in his final run.

"I'm definitely really stoked on how I skied. The goal was just to land a run in qualifiers, not even thinking about finals yet," the 21-year-old told Pique. "It's awesome that I got fifth."

Norway's Oystein Braaten topped the field with a 95, American Nick Goepper claimed silver with a 93.60 and Canadian Alex Beaulieu-Marchand won bronze with a 92.40.

Though Harle was scuffling in his first couple runs, he didn't feel any pressure as he prepared to drop with his last shot.

"The first run, I messed up on a rail that I hadn't really been messing up on much. It messed with my head a little bit. On the second run, I was overthinking the wind and got a little messed up by that in my brain," he recalled. "The third run, I told myself to chill out a little bit and do the run I've been doing all day. I wasn't feeling lots of pressure. It was kind of weird.

"I'd already achieved my goals and by the time I got to the finals, I was stoked on being there, and whatever happened happened."

Harle gushed about the course itself, which had giant features, like shoulder-high rails, and was significantly larger than a lot of World Cup tour stops.

"It was unreal. Best course ever, for sure," he said. "It was definitely way, way bigger."

He also praised the course inspection video rendering, which he described as "exactly the same" as the course. It was a welcome change from other competitions, he added.

"It was crazy how precise they were, and every angle was exact," Harle said. "I don't know how they did it."

Harle is staying in South Korea until the closing ceremony, and now that his commitments are complete, he hopes to take in as much as he can during the last few days of competition.

On the women's side of the slopestyle competition, Whistler's Yuki Tsubota was the lone Canadian to advance to the finals.

"I'm super happy, qualifying was the big obstacle today," Tsubota said in a release. "Everyone has stepped up their game, it's a lot tougher to make it. All the girls here had a chance to win this contest, it was anyone's game. A lot of good girls didn't even make it to finals today."

Tsubota ultimately placed sixth with a score of 74.40, which she achieved on her first run but couldn't top in her two successive attempts. Swiss skiers took the top two spots as Sarah Hoefflin (91.20) and Mathilde Gremaud (88.00) performed well. Great Britain's Isabel Atkin took bronze with an 84.60.

On the alpine side of things, Canada hasn't taken home any hardware, but there are some results to be proud of from the past week.

Dustin Cook scored a top-10 in the super-G with a ninth-place showing, 0.79 seconds back of gold medallist Matthias Meyer of Austria. Beat Feuz of Switzerland and Kjetil Jansrud of Norway took silver and bronze, respectively. Whistler Mountain Ski Club alumni Manny Osborne-Paradis and Broderick Thompson finished back to back in 22nd and 23rd, respectively.

In the giant slalom, meanwhile, Erik Read took an 11th-place finish, 2.70 seconds back of champion Marcel Hirscher of Austria. Norway's Henrik Kristofferson and France's Alexis Pinturault also medalled. All the other Canadians were in the top 30 as Trevor Philp took 18th, Phil Brown was 27th and WMSC grad Jack Crawford ended up 29th.

Osborne-Paradis also took a 14th in the downhill, sitting 1.64 seconds back of champion Aksel Lund Svindal of Norway. Countryman Jansrud was second and Feuz was third. Ben Thomsen took 28th, while Cook and Thompson were 32nd and 35th, respectively.

Candace Crawford was the lone Canadian to finish the giant slalom in 25th as American Mikaela Shiffrin took the win over Norway's Ragnhild Mowinckel and Italy's Federica Brignone.

In the women's super-G, Valerie Grenier was the top Canadian in 23rd while Crawford and St-Germain placed 29th and 37th, respectively. Czech snowboarder Ester Ledecka shocked the world with her performance to win gold, edging Austria's Anna Veith and Liechtenstein's Tina Weirather.

In sliding action, Canadians tied for gold in two-man bobsleigh as Justin Kripps and Alex Kopacz could not differentiate themselves from Germans Francesco Friedrich and Thorsten Margis. Latvians Oskars Melbardis and Janis Strenga took bronze. Nick Poloniato and Jesse Lumsden were seventh while Chris Spring and Lascelles Brown placed 10th.

As for skeleton, Canadians bunched up in the middle of the pack as Elisabeth Vathje was ninth, North Vancouver's Jane Channell was 10th and Mirela Rahneva was 12th. Great Britain put two on the podium with Lizzy Yarnold and Laura Deas taking gold and bronze while German Jacqueline Loelling won silver.

As for the men, Kevin Boyer was the lone Canadian to make it to the final run, ending up in 17th. South Korea's Sungbin Yun won gold while Olympic Athlete from Russia Nikita Trgubov took silver and Great Britain's Dom Parsons snagged bronze.