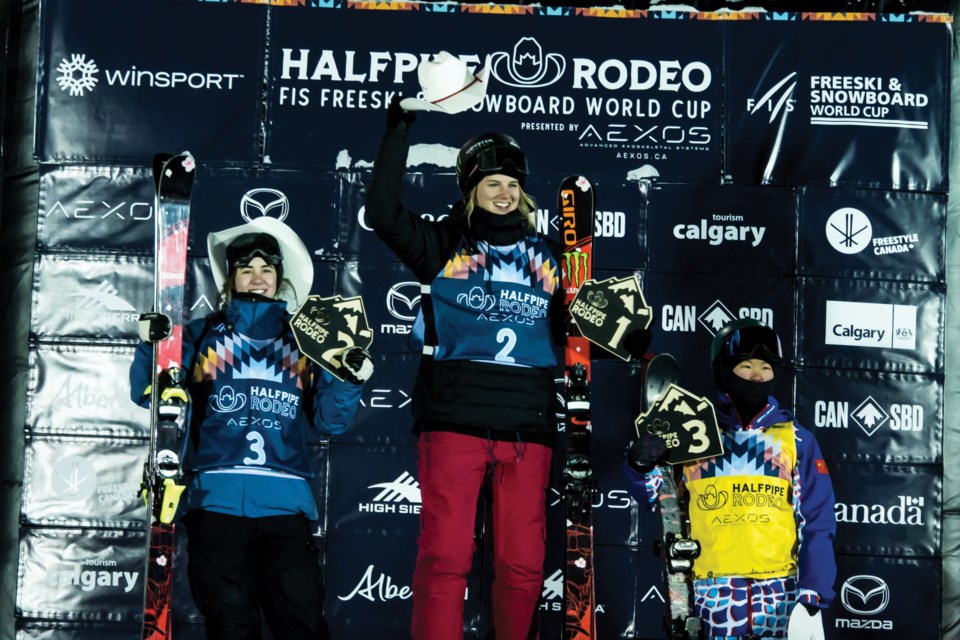 When Cassie Sharpe got the chance to compete in only her second FIS World Cup on Canadian soil in Calgary on Feb. 16, it was, oddly, a bit of a change from her routine.

Having a World Cup, in the form of the first-ever Halfpipe Rodeo, at Canada's cornerstone Calgary Olympic Park course was fun for Whistler resident Sharpe, to be sure. But she acknowledged that the familiarity threw her for a bit of a loop, at least initially.

"Honestly, it was a little weird because when you go into a competition, you have to get used to a new halfpipe and you have to just get in there and figure it out," she said, "whereas here, we didn't really have to figure it out. I felt pretty at ease going into it."

Sharpe certainly displayed her knowledge of the course, qualifying in first and scoring a 91.50 on her first run to cruise to victory over fellow Canadian Rachael Karker's 86.00. China's Kexin Zhang placed third with an 84.50.

On a frigid, snowy night for finals, Sharpe was thrilled to land her first run as she planned it, capping it with an exclamation in the form of a cork 1080.

"The weather was turning so quickly. It was really windy up top. I knew that I had to land my first run because the pipe was slowing down and it would be hard to put down another run later into the competition to do the same thing," said Sharpe, who rounded out the evening with an even 90.00 in her final attempt. "After that run, I felt really good about it and was pretty confident going into the next two runs. It just kept slowing down and slowing down, so I wasn't quite able to up my first score."

One of Sharpe's main rivals this season has been countrywoman Karker, who holds the FIS Crystal Globe advantage heading into the final event of the season at Mammoth Mountain in March.

It's a friendly competition much of the time, however, as the 26-year-old Sharpe sees a lot of herself in the 21-year-old Karker.

"It's super fun to have Rachael up on the podium with me at events. She's kind of doing what I did in 2015 when I had my breakout year, dominating and showing that you're not there to mess around," Sharpe said. "It's pretty cool to watch her come through."

The proximity to home allowed Sharpe's family and friends to support her in the flesh, something she hadn't experienced to that level since winning Olympic gold in South Korea last February.

"It was awesome. I had pretty much my whole crew there that was at the Olympics supporting (me)," she said. "It was super fun. There were quite a few people out there braving the cold on finals night, but the qualifier (on Feb. 14) was gorgeous. It was super sunny and the pipe was running really fast."

Sharpe added that the contest was well organized and, sticking with the Wild West theme, there was an afterparty at infamous Calgary nightspot Cowboys.

"There was a lot of good energy," she said.

Karker echoed Sharpe's sentiments, saying she was thrilled to excel in her first Canadian World Cup.

"I am so happy that Calgary hosted this event and to podium for Canada in Canada is incredible," Karker said in a release. "We are used to skiing this pipe so it makes it a little easier because we know it so well."

Canada also podiumed in the men's event as Noah Bowman earned a third-place finish with an 85.50 tally. American David Wise's 90.00 snagged the win over New Zealand's Nico Porteous, who notched an 87.75.

"It's a very cool feeling to hear the crowd cheering for you; it almost brings more nerves than usual. I wanted to do my best for all the people that came out to support us," Bowman said in a release. "If I didn't have this pipe in my backyard growing up I don't think I would be doing what I am doing now so I have Winsport and (Calgary Olympic Park) to thank for where I am today."