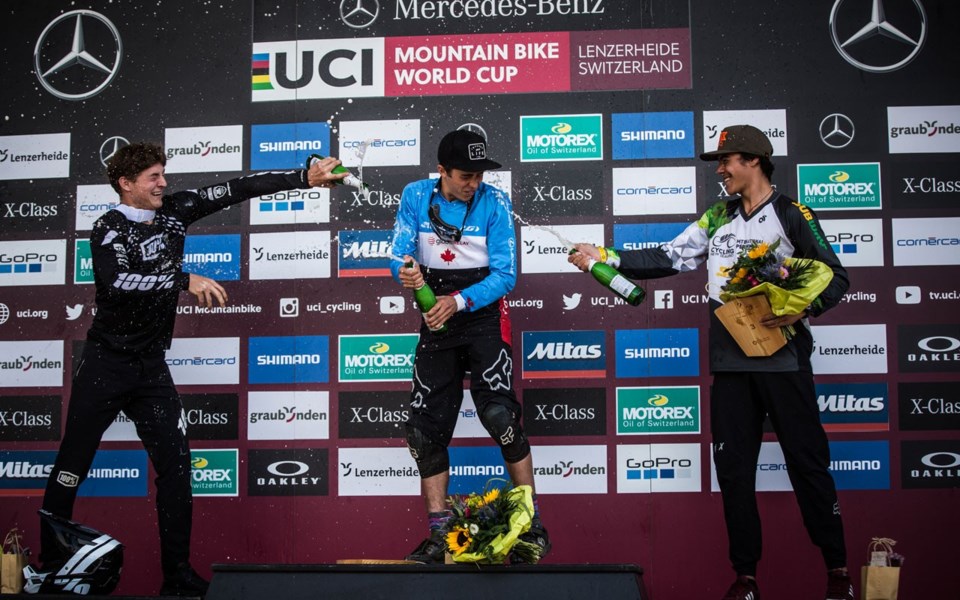 Sherlock credited his success to attacking a wet, potentially slick track as though it was dry and dusty, which ended up paying off.

"I felt pretty solid on the track. It got kind of rainy right before my run, but I thought that it was actually pretty dry, so I just went as fast as I would have in the dry [conditions] and it worked out," he said. "I didn't notice it being that slippery, but it seems like a lot of people held up because they thought it would be a little slipperier than it was."

Sherlock qualified third and as such, dropped near the end of the race. As a result, being on top with two riders left, he had assured himself at least a podium finish.

He remained in the hot seat at race's end.

"It was crazy. I've never been more stoked. It was awesome," he recalled.

However, Sherlock acknowledged that his expectations were far from lofty entering the race, as the course setup didn't seem to align well with his approach to riding.

"It was one of the courses that I expected to be the worst for my riding style," he said. "There were more jumps, more berms and it was less technical than some of the other World Cup courses. It was still pretty technical, but one of the least."

Given that, Sherlock feels more confident moving forward as he's gained a sense that he can conquer anything the World Cup circuit might throw at him.

Sherlock is a regular in Whistler as his grandparents own a house in Nordic Estates. He trains plenty at the Whistler Mountain Bike Park, and combined with riding in his hometown, feels well prepared to take on international trails.

"I find more value out of riding in Squamish than Whistler. It's still really good to be able to ride trails like In Deep [in the bike park]," he said. "You get really comfortable riding some really technical stuff.

"With the bike park stuff up here, it's a more flowy kind of riding style, and then in Squamish, it's pretty rugged, pretty raw."

In his first World Cup season, Sherlock entered hoping to qualify for most races, get some top-15 finishes and perhaps a top-10 placement.

While qualifying hasn't been a sure thing for Sherlock quite yet, when he does, he's made the most of it, taking finishes of 10th, sixth, third, another sixth and now, first.

"It's been a pretty good progression," he said.

In elite men, Mark Wallace was the top Canadian in 14th while Whistler's Finn Iles finished toward the back of the pack in 58th.