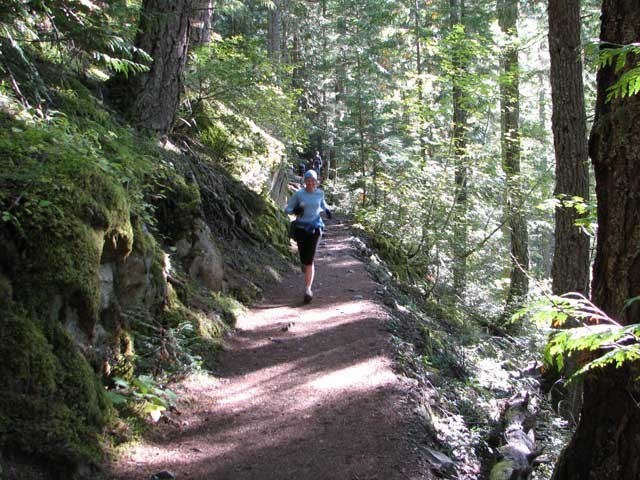 The 24 th annual Rubble Creek Classic got underway in cold but clear conditions on Sunday morning, with about two-dozen runners opting for the early start and the rest leaving at 8 a.m.

The 26 km trail race was limited to just 80 participants, taking place entirely within Garibaldi Provincial Park. The course is really two trails, a long, steep climb up the Helm Creek trail, and a 12 km, knee-shattering descent down the Rubble Creek Trail.

Squamish’s Roger Shirt, the organizer of the Loop the Lakes trail run, improved on his second place finish from last year to place first overall as well as first in the 40 to 49 age category.

Shirt ran the first few kilometres with Chris Downie, but early in the climb he found himself alone up front for almost 24 km.

“I’m probably even on the uphill and downhill relative to other people,” he said. “I pretty much ran my own race. I knew I had to get up the hill and after that just let it roll on the downhill.

“It’s tough to know where the other people are because if it takes a second to look around you’ll probably fall on your face. I just kept telling myself ‘don’t fall, don’t fall’, but of course I fell. It’s tough, you can’t look ahead because you’re moving pretty fast and there are a lot of rocks and roots that can trip you up. You really have to keep focused, which is one of the reasons I like trail running compared to road running.”

Shirt plans to run the Lumpy’s Epic on Oct. 19, but otherwise is winding down his season on a high note.

“It was another beautiful, beautiful day, and it was just stunning up top,” he said. “That’s the whole reason I do this race, it’s such a stunning run.”

Greg McDonnell was the fastest Whistler runner, placing third overall in 2:14:32. McDonnell was also the runner who did the least amount of training leading up to the race.

“I rode my mountain bike a lot this summer, and when I started to get scared about the descent I did a little interval training with the Tri Club this year,” he said. “I had an idea the downhill would be tough, I’ve done Comfortably Numb a few times, but this was a little more murderous. It was a lot faster than Comfortably Numb because the trail is pretty buff and not that steep, but then you’d come up to a section of rocks and roots and it was a little nerve-wracking trying to slow down your momentum or pick a safe way around.”

McDonnell was impressed with the views, and said the format of the race made the day go quickly.

“It’s basically a three-stage race,” he said. “There’s a power hike for the first five or six kilometres, a false flat for the next seven or eight, and then a savage descent for the next 12 to 14K. Up in the flats it was absolutely gorgeous.”

McDonnell ran with fourth place finisher Ben Biswell for most of the run, but lost him on the downhill. Biswell finished in 2:15:54.

Martina Ramage was the top female runner, in 14 th place overall, posting a time of 2:29:18. She was also one of the few runners that seemed to enjoy the downhill.

“I thought the downhill was awesome — everybody said to practice, practice running downhill, but I actually thought it was perfect because I thought it was going to be a lot steeper,” she said.

This is Ramage’s first year racing, and she said she has been in 13 or 14 races this season — mostly on trails.

Initially, Ramage tried to pace Rubble Creek with Marieve Legrand. “I looked at her time last year, and knew I was comparable to her running so I stayed with her at the beginning. But she was going a bit slower on the downhill and I passed, although I was bit worried that she knew something I didn’t. The rest of the race went really, really well, I felt strong the whole way up, and enjoyed the downhill. I thought it was gorgeous, one of the nicest courses I’ve ever been on.”

Complete results are posted at www.rubblecreekclassic.com.