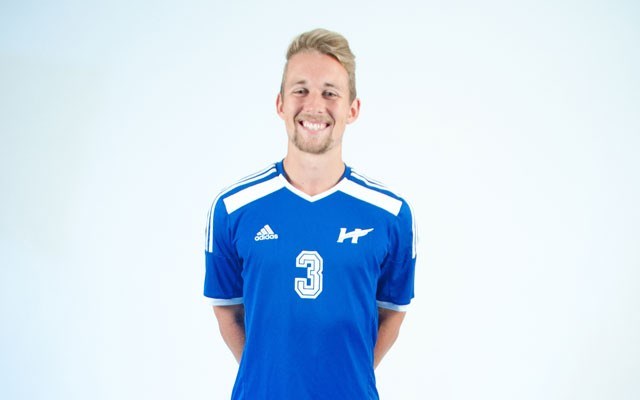 Of all the student-athletes leaving the University of British Columbia, Okanagan, a Whistlerite will be missed the most.

Harrison Shrimpton, who led the men's soccer team by playing every single minute of their dozen games last fall, was named the school's graduating player of the year at the school's awards ceremony on March 29.

"I found out that I was one of the five nominations, so that was surprising enough. It was a great feeling to be nominated," he said. "At the awards ceremony, getting my name called was quite the feeling. It was a big surprise, but I'm very honoured to get it for sure."

Shrimpton first tried out for the Heat when he was in Grade 12 at Whistler Secondary School, but did not make the team at that time. He persisted, attending another tryout and later earning a spot as a walk-on. He helped the squad transition from the PACWEST circuit into the more competitive Canadian Interuniversity Sport level two seasons ago, leading the Heat to a playoff berth in their first season.

"It's been a very humbling experience overall. Obviously, having the opportunity to play for the team in the first place and the way that I was able to be on the team was such a great experience. Developing not only my playing skills but my leadership qualities and just being a better team player was huge," he said. "It was a great journey to be a part of."

The human kinetics graduate is just getting set for exams and will take a trip to Europe this summer. He's still waiting to hear back regarding graduate school, but has his eye on a new University of Toronto masters of kinesiology program set to debut this autumn.

In an anticlimactic ending to the Freeride World Tour season, the men's ski event in Verbier, Switzerland was wiped out because of poor conditions.

That means tour rookie Logan Pehota of Pemberton missed out on his outside chance to catch leader Loic Collomb-Patton of France for the overall title.

In an Instagram post, Pehota explained while he was disappointed to not get to compete in Switzerland, earning two podiums in four events, including a win in Haines, Alaska, made for a magical first season.

Pehota wrote: "Although I wish I would have had a chance to fight for the top spot on the tour, we have taken (on) the overall standings... and I'm still stoked to end up in second!"

Pehota was later announced as the FWT male rookie of the year for his accomplishments this winter.

Whistler will be represented on the B.C. U16 girls' basketball team.

Whistler Secondary School's Emelia Leigh was one of a dozen players named to the squad on April 4. The team will compete at tournaments all over the continent.

The team is made up of players from Kelowna, Kamloops, Chilliwack, Abbotsford, Vancouver, North Vancouver, Prince George and Victoria.

In a release, head coach Anthony Luyken was encouraged about the roster he's assembled.

"(I) love this group. There is opportunity for tremendous growth and development. The exciting part is we don't even know where our ceiling lies," he said.

With a planned opening date of early summer, work has resumed on the latest phase of the Whistler Skate Park.

Construction is slated to begin again early this month, with plans to pour concrete once the ground has been given a week to thaw in favourable conditions. The RMOW is urging the public to avoid skating at the park, located near the day lots along Fitzsimmons Creek, before the concrete has had a chance to set for up to 21 days.

Skating prior to this can permanently damage the park's surface, the RMOW said.

"Skaters and members of the public are asked to respect all construction fences and signage for their own personal safety and project efficiency. This will be critical once all the concrete is poured," said Mayor Nancy Wilhelm-Morden in a March 31 release.

"Skaters are asked to help protect the concrete during the curing process by self-policing and keeping in mind the bigger picture — we all want to see the successful completion of this exciting project and its use by skaters of all ages for many years to come."

The latest addition to the park has been underway since 2014. The design was undertaken by North Vancouver-based Spectrum Skateparks Ltd. after extensive consultation with the public and has "evolved to be less about quick hits down some stairs, and more about really long lines, being able to hit multiple ledges, all while pumping and flowing for speed," according to the municipality.

Phase 3 of the park will be built in Rebagliati Park between the existing Phase 2 portion of the park and the Valley Trail.

The RMOW said it would provide updates on construction as they become available, as well as details about a grand opening event.

The Whistler Skate Park Revitalization Project is funded through $807,000 in provincial Resort Municipality Initiative funds and a $100,000 donation from the Whistler Blackcomb Foundation.