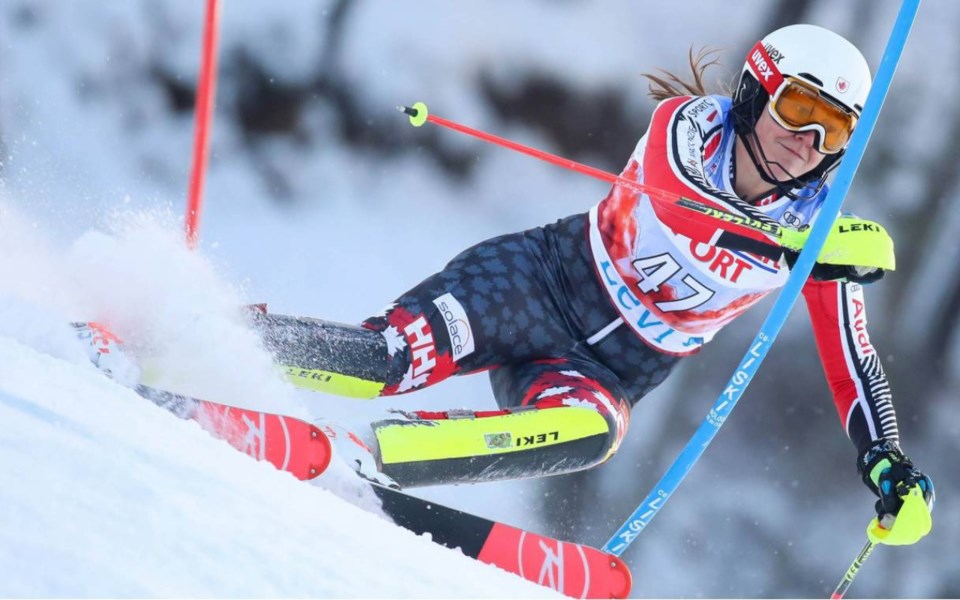 Alpine Canada mustered four top-30 finishes in the first slalom races of the season in Levi, Finland on Nov. 11 and 12. Marie-Michele Gagnon of Lac Etchemin, Que. led the way, finishing 10th in ladies slalom, 3.48 seconds back of the lead.

Another promising performance came from 23-year-old Laurence St-Germain of St. Ferréol-les-Neiges, Que., who finished 17th overall, despite wearing the high-numbered bib of 45.

"For Laurence it's great to see her gain World Cup points today," said head coach Manuel Gamper in a release. "It's great for the rest of the team to see another athlete from the next generation group achieve a great result. We saw Valérie (Grenier) be very close in Sölden and we know she also has what it takes to hit the top 30."

Rounding out the ladies side, Erin Mielzynski of Collingwood, Ont. came in 27th.

On the men's side, only Erik Read of Calgary, Alta. placed, coming in 21st, and finishing just 1.59 seconds back of the first. Trevor Philp and Philip Brown didn't qualify for the second run.

The next World Cup stop for the ladies slalom team is Nov. 26 in Killington, Vt. The men's team won't have another cup race until Dec. 10 in Val D'Isere, France.

Downhill skier David Poisson has been killed during a training run at Nakiska resort in Alberta. He was 35.

According to a statement released by the French Ski Federation, Poisson dropped heavily after losing a ski, went through the safety netting and hit a tree on Nov.13. Emergency medical services declared him dead on the scene. The French team was in Kananaskis training for upcoming North American World Cup events.

The International Ski Federation expressed its condolences to Poisson's family and friends in a statement. Nicknamed "Caillou," Poisson's death is mourned by the international skiing community, with many athletes sending out condolences over social media. Former Canadian skier Kelly VanderBeek tweeted on Monday, "My heart goes out to the entire community, but especially his family, friends, and all those who loved him."

Poisson finished seventh in the downhill at the Whistler 2010 Olympic Games, and also won a bronze medal at the 2015 World Cup in Santa Caterina. He was known around the World Cup circuit since his debut in 2004.

Cycling season is over and the Whistler Off Road Cycling Association (WORCA) invites all members to reflect on the year that was at the Annual General Meeting Nov. 16 at the Hilton 6:30 p.m.

During the night of discussion about all things mountain biking in the area, all Board of Directors positions will be up for election/re-election. WORCA is also in need of a new Youth Director, PR Director, Secretary and Race Director, so the Nomination Committee will be listening to potential candidates.

Details about each position can be found on the website. If you missed submitting an online application for any position, you can attend the meeting and nominate yourself.

For more information on the AGM, as well as the open positions, visit www.worca.com

Before getting out and tearing up the trails this winter, the Powder Mountain Snowmobile & Outdoor Recreation Club would like to invite members to its Annual General Meeting this Monday Nov. 20, at the Cinnamon Bear Bar and Grille at 7 p.m.

The meeting will start with a presentation of last year's financial statements, before discussing matters for the upcoming year, including: a proposed Provincial Membership Plan, increasing membership and day pass fees, reinstating a dual pass with Pemberton Valley Snowmobile Club, grooming costs and more. There will also be an election for Board of Directors and Officers.