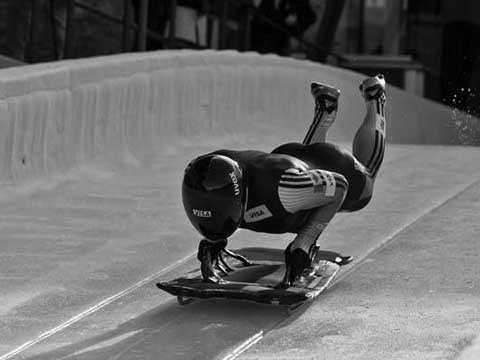 The first lugers headed down the ice at the Whistler Sliding Centre on Tuesday, opening the Olympic facility's first season as an official legacy of the 2010 Games. By the end of November the track will have hosted World Cup bobsleigh and skeleton events, the first of the season on the World Cup circuit. It's also the first official World-anything held at any of the Olympic venues - a point of pride for Paul Shore, director of the Whistler Sliding Centre.

"It's pretty crazy," said Shore. "The first thing we're doing, in the first month in operation, is a World Cup. There are three more events in North America after this one, then a break for Christmas, then the series moves to Europe for five more events... but it all starts in Whistler."

The $117 million sliding centre is now owned and managed by the Whistler 2010 Sport Legacies Society, which recently took possession of other legacy Games venues like Whistler Olympic Park. As a working legacy, there are plans to use the facility to host events and serve as a training centre for national, provincial and club level athletes - as well as a growing number of recreational sliders.

To that end, the venue is the official headquarters of the B.C. Luge Association (BCLA) and the B.C. Bobsleigh and Skeleton Association (BCBSA), both of which are affiliated with the national sports organizations.

The BCLA is hitting the ground running and already has seven "learn to luge" camps scheduled for kids aged 8 to 14, starting on Dec. 18 and running through March. The BCLA is also running programs and camps for returning and experienced athletes. If you want to know more or sign up for a camp, e-mail info@luge.ca.

The BCLA is also planning to host similar camps for bobsleigh and skeleton. Although these sports traditionally draw heavily from luge - and in the case of bobsleigh from other sports that emphasize power and speed - there is still a strong focus on development. Skeleton sessions should be announced soon, with bobsleigh sessions following. For more information, e-mail info@slidebc.ca.

In addition to the World Cup, an Intercontinental Cup for skeleton will take place on Jan. 20 to 21, as well as assorted smaller events at the club and provincial level.

For the 2011-2012 season, the bobsleigh and skeleton World Cup will likely return although the calendar has not been finalized for that season. As well, the venue will host a FIL World Cup luge event, followed by the FIL Luge World Championships.

Shore says the long-term success of events at the venue will depend largely on crowds. Given that the World Cup test events sold out in 2009, the future looks good.

"We're feeling quite a bit of buzz now as the World Cup gets closer and the marketing hasn't even kicked in yet," he said. "Hopefully it will be a lot like 2009 with big crowds. It's going to be a big weekend with the U.S. Thanksgiving and opening for the mountain, and Tourism Whistler is starting to push the event as well. There's also a lot of adrenaline sports junkies in the corridor that can appreciate sliding sports for the speed and techniqiue.

"All the top names will be there, like (skeleton gold medallist) Jon Montgomery and all of our medal-winning bobsleigh teams... and the top U.S. team that won the first medal in, what, 60 years."

It's important that the Whistler event gain traction, says Shore, combined with events in Calgary, Park City and Lake Placid.

"Four events is a critical mass for these sports, and especially for bobsleigh where it's really expensive to have your sled shipped around the world," explained Shore. "If North America held just one race this year then all of the European teams would say 'forget about it.' Two events is still kind of a stretch. You need at least three to be successful and four makes it pretty much mandatory for everybody."

The Whistler Sliding Centre is currently the fastest track in the world, with the top bobsleigh and luge athletes breaking 140 km/h in competition. It boasts 16 turns over 1,450 metres, as well as the steepest drop of any course in the world - 152 metres from top to bottom.

It takes about five days for the refrigeration system to get the shaped concrete cold enough to start making ice, and another five days to a week for a professional track crew to get the ice in place and shaped for the sliders. Compared to other venues, the process in Whistler is considered fast.

And it's not only athletes that will be having all the fun.

Although keeping ice on the track for athletes is expensive, the plan from the start was to cover part of the facility's operating costs by opening up the track to the public. The sports legacies society is working behind the scenes to offer the Skeleton Sport Experience and the Bobsleigh Sport Experience this winter.

The B.C. Safety Authority is currently reviewing their application ("it's classed as an amusement park ride," explained Shore), and a start date won't be announced until those tours pass provincial licencing requirements.

Shore expects the Skeleton Sports Experience to be first out of the gate. For $130, guests will get two runs on the course from the Maple Leaf Start, also known as Corner 11, about two-thirds of the way down the track. Even from there he says that sliders can reach speeds between 80 km/h and 100 km/h - and sometimes slightly faster if they're big and figure out how to steer.

"We did a lot of testing last year and it is amazing," he said. "I've done a bunch of runs and it's real skeleton - face down, high speed, on a real sled. It's a real rush."

Participants will be given a full helmet and pads and an orientation session. There's no running into the start, but sliders are released once they're in position.

Two runs are essential for the experience, says Shore.

"You really need two runs, because what we've found is that on their first run people tend not to steer or absorb much because they're nervous or taking in the environment," said Shore. "If we give them a second run, it's a whole different experience because people know what to expect and all the nervousness is gone."

Bobsleigh runs will cost $140, with three guests in a sled with a certified driver. The driver will have a mechanism that allows him to serve as the brakeman as well as the pilot. The sides are raised slightly at the back of the sled to protect the passengers and there are handles mounted in the sled so riders can sit up during the ride, instead of crouching down like competitive athletes looking to reduce their wind resistance.

Other than that, Shore says the sled is very similar to what athletes used in the Olympics. And the ride will be very fast.

"You start quite a bit higher, from the Novice Start at Corner 7," said Shore, from which point he says sleds can reach speeds of 125 km/h. "That's the top speed on other World Cup tracks around the world," he said.

There aren't many other tracks around the world offering skeleton tours, so Shore and his crew priced the experience similar to other adrenaline-themed tours around Whistler. As for bobsleigh, Shore says $140 is probably the cheapest anywhere, with prices between $150 and $250 at other sliding tracks.

It likely won't happen this year, but Shore would like to see a system implemented in future years where return guests can take tours from higher up the course.

"Right now it's probably more than the public needs to experience the sport, but we've done testing from higher up and at a later date we may have a system where you could graduate to higher starts," he said.

Shore expects that there will be questions about safety after a young luger from Georgia was killed in training for the Olympic Games, but says at the lower speeds the risks are negligible. By comparison, the luger was going 140 km/h at the time of the accident.

Shore says luge is a very different sport than skeleton or bobsleigh with athletes navigating the course face up and feet first. A bobsleigh is too heavy to dislodge from the track, while skeleton racers go slower and can bail out easier if there's a problem.

As well, the track has been modified since the accident and the sports legacies society is currently seeking a company to perform an external safety audit in compliance with the B.C. Coroner's Service recommendations following their investigation.

"We've added things like rollover barricades, which you can see on other parts of the track - they're basically deflector walls on the insides of corners," said Shore. "And the concrete in some corners has been extended this summer."

"I wouldn't say those things were a direct result of the tragedy. We're in a mode where we're always looking at ways to improve safety, and many of the changes we've made have nothing to do with the accident."

For the time being, luge athletes will use the lower starts mandated at the Games following the accident. Both bobsleigh and skeleton opted to start from the higher starts as originally planned.

So far Shore is encouraged by the number of volunteers that have returned to the track for the upcoming World Cup, with roughly 60 per cent of their Olympic Games volunteers back in uniform. As well, volunteers from other venues have joined the team to stay involved.

"We're really quite pleased," he said. "I think we needed about 75 people, and we're almost there with a lot of people staying involved and volunteers from other venues where there aren't any events like this planned."

The competition will be rebroadcast on CBC Television in Canada, and will be streamed live over the Internet at www.cbc.ca. The World Cup will also be carried by NBC affiliate Universal Sports and roughly 15 other networks in Europe.

"This should provide some nice coverage for Whistler, because we're on in all the markets we're focusing on for destination travellers," said Shore.

For more information on the track and programs, visit www.whistlerslidingcentre.com.