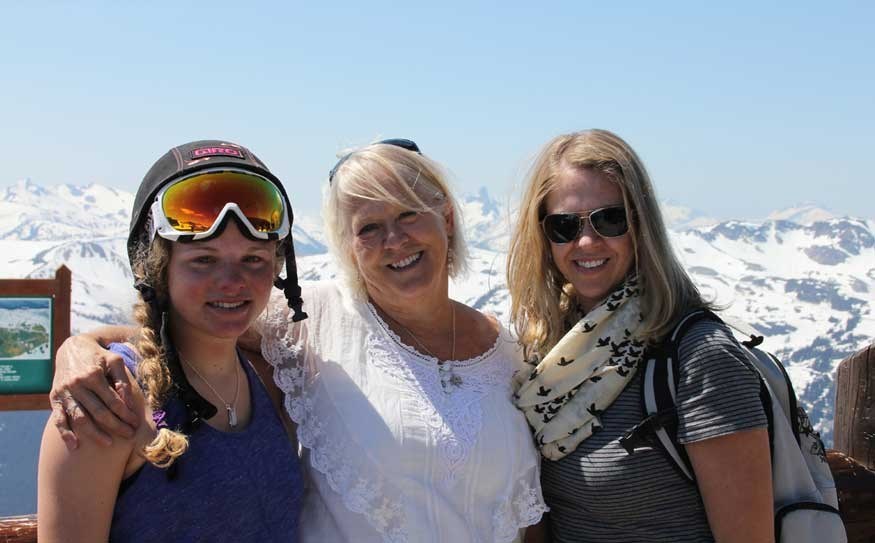 While much has been said of freeskier Sarah Burke's impact on the world of skiing, nowhere is that impact more apparent than on the Horstmann Glacier this week. Some 15 summers ago she was the only girl taking part in Momentum's summer program; this year there are 40 girls taking part in the camp, enrolled in a women's week that Burke helped to create.

One of the girls taking part is Emma Stevens from Brookfield, Nova Scotia. This year she was awarded Momentum Camp's first Spirit of Sarah scholarship, a free camp week created in Burke's memory and awarded to the female skier they felt best embodied Burke's spirit — her energy, her positive outlook, her determination and her skill. On Monday, Stevens met with Burke's mother and sister, Jan and Anna Phelan. Both were part of the selection committee that chose Stevens over dozens of other applications.

It was only Jan's second time on the glacier, where Sarah skied as a camper for four years before making the leap to coaching. Despite going on to become one of the biggest names in the sport, she always returned to the glacier. It's where she learned many of the tricks that made her internationally famous, and where she met her husband Rory Bushfield in her first year.

"It's been quite a treat meeting Emma," said Jan. "Emma said there were 40 girls here today, and to know that Sarah was the only one out there when she started, and how she spent her time helping girls and encouraging girls and promoters to include girls, it's so incredibly gratifying. I know Sarah would be proud.

"Seeing all the kids and the energy has been great. And this scholarship that John (Smart of Momentum Camps) set up is absolutely brilliant... I think John's come up with a brilliant way to carry on Sarah's legacy of getting girl's involved. (It) is perfect, and I really was thrilled to be part of the process of choosing Emma."

Burke passed away on January 17 after suffering a head injury during a halfpipe training run. Since then there have been numerous tributes to the freeski star, including having the top trophy for professional freeskiers renamed in her honour. Last month she was inducted into the Canadian Olympic Hall of Fame for her work to get ski halfpipe in the Games, and this week the street where she grew up in Midland, Ontario was renamed Sarah Burke Way.

For Anna, it's always a bit surreal to see how much of an impact her sister has had on others. Her trip to the glacier on Monday was her first.

"It's great to see all the kids hanging out, and now I have a reference to see where Sarah was standing in all the photos she has," said Anna. "It was always hard to understand what it was all about, but now I'm here and I get it. There's a nice feeling of camaraderie and friendship that's just wonderful.

"It's pretty surreal, the whole celebrity thing, because she was always just my sister and part of our family, and seeing how many people she inspired and moved and pushed and that are in awe of her — it does make it a little easier to move on. All of the kids have Sarah Burke stickers on their helmets making sure the spirit of Sarah is going to go on forever. They're keeping her memory alive, and her drive, and her work ethic, and I think that's amazing."

As for Stevens, she spent her first three days practicing her corked 720 spins onto the air bag, and is hoping to take the trick to the snow by the end of the week. And everywhere she goes, she can see Burke's influence. "It really feels like she's everywhere," said Stevens. "Everyone is wearing her stickers and her jewelry for the foundation. Her spirit is definitely in everyone here. It's really special to be a part of that."