Believe it or not the weather forecast on Wednesday called for clear but cold weather for tonight's Halloween Toonie ride by the Whistler Off Road Cycling Association, which is good news for anyone with a costume that doesn't like to get wet.
Oct 24, 2012 9:00 PM By: Andrew Mitchell 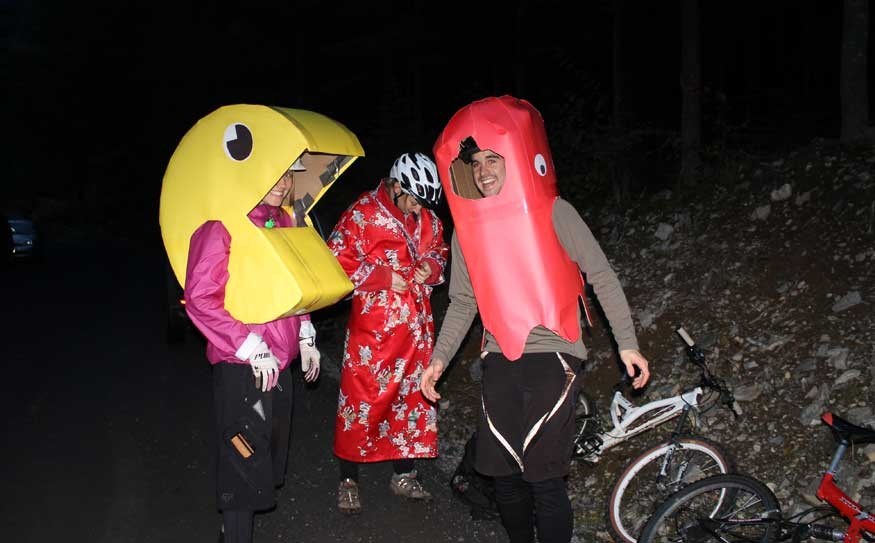 Believe it or not the weather forecast on Wednesday called for clear but cold weather for tonight's Halloween Toonie ride by the Whistler Off Road Cycling Association, which is good news for anyone with a costume that doesn't like to get wet.

Registration gets underway at 5:30 p.m. and the ride starts at 6:30 p.m. sharp at the bottom of the West Side Main Road in Cheakamus Crossing. It will be dark, so good quality bike lights or headlamps are a must have. While costumes are recommended — the best costume gets a free membership for next season — you should also be able to see, steer and ride safely.

The trails are in the Whistler Interpretive Forest, and the after-party is at the Whistler Brewing Company with live music and potluck dinner — bring something to share with the other riders.

Fun Run for the Food Bank

The Valley Trail loop around the Whistler Golf Club is one of the more popular walks and jobs in Whistler, and it's also the course for this Saturday's Fun Run to benefit the Whistler Food Bank. Registration is $5 or a donation of non-perishable food items for the bank.

For more information or to volunteer, email Christine@c2skymultisport.com.

The 15th annual Lumpy's Epic trail run took place this past Sunday with wet and slippery conditions on the course, but extremely fast times for the racers.

Geoffrey Richards from the Callaghan Valley Training Centre placed first in 37:49, with Ben Biswell hot on his heels in 37:54. Colin Ferrie, also from the CVTC, was a close third in 38:02.

There was also a kids' 5km race targeted at kids in the local Nordic skiing programs.

In the boys event, the fastest racer was Michael Murdoch in 25:43, followed by Oskar Steiner in 30:02 and Ian Davidson in 30:03. All race with the Whistler Nordics.

In the girls race, Alisa Feuz of the Spud Valley Nordics placed first in 27:53, followed by teammate Kaede Kawano in 32:50. Julia Long of the Whistler Nordics was third in 37:57.

The Whistler Saints flag football team improved its record to 5-0 on Sunday with another big win, 32-6 over the North Vancouver Packers. Quinnt Goertson, Griffin Brown, Dane Kirkegaard, Josh McKenzie and Trenton Shumann each scored a touchdown, with Logan Anderson scoring on a convert.

The Sea to Sky Titans full contact pee wee team racked up its second loss of the season on Sunday, falling 30-6 to the West Vancouver 49. Jhett Vernor scored the team's only touchdown in the loss.

The good news is that the Sea to Sky Titans minor team earned its first win of the season, 32-26, over the West Vancouver 49ers, with Nolan Welsh scoring twice — including the game winner with less than two minutes remaining. Nolan Robinson had a touchdown and a two-point conversion, Hunter Verner returned a kick for a touchdown and scored on a touchdown pass from Jack Forsyth. Forsyth added a conversion.

On the girls' side, North Shore Galaxie edged out North Shore Dynamite for the win, with Whistler 1 edging Whistler 3 for third place. Whistler 2 beat North Shore Maseratis to place fifth.

Also this past weekend, the Whistler U12 girls team started their quest for the Community Cup with a win over the North Shore Mustangs. Irie Smith scored two, Mila Witenberg two and Gigi Kranjc one to make it 5-0. Gabby Flynn and Irie Smith shared the shutout in goal.

Staying fit through the long Whistler winter can be tough, especially if you don't snowshoe or cross-country ski. To give people something to do through the winter months, this week the Resort Municipality of Whistler's recreation department announced its adult co-ed drop-in sports schedule. All drop-in sports take place at Myrtle Philip Community Centre for an $8 fee.

As well, Meadow Park Sport Centre offers novice and regular drop-in hockey four days a week, and other classes ranging from yoga to zumba to spin classes. For more, visit www.whistler.ca/meadowpark and download the newest schedule.