The annual North Shore Spring Triathlon took place on Victoria Day, May 21, with a solid turnout taking on a sprint distance event
May 23, 2012 9:00 PM By: Andrew Mitchell 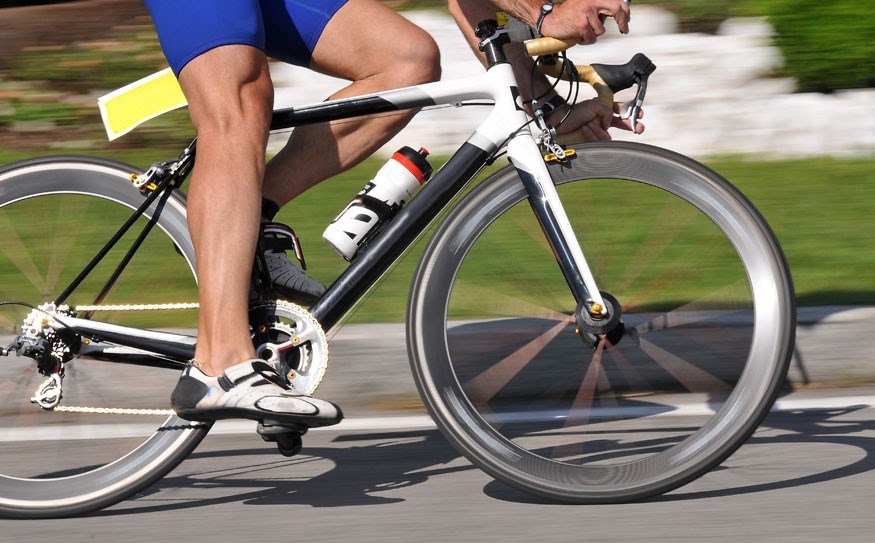 The race got underway with a 740-metre pool swim, followed by a 20km bike and 5km run.

The Whistler Tri Club is hosting a beginner distance this weekend based out of Meadow Park.

If you missed the early registration period for the Whistler Outdoor Volleyball Association, the official registration day is Tuesday, May 29 at Dubh Linn Gate, starting at 6 p.m. All teams and players, including those who have already registered, are required to attend to receive their shirts, team volleyball, team photo and to sign waivers.

Teams arriving will need to get a number for what division they want to play in. The Monday and Thursday divisions are already full, so teams looking to play co-ed recreational four-on-four or intermediate three-on-three should be prepared to play another night, Friday or Sunday. The competitive two-on-two division is also filling up.

By picking up a number, teams will know at the start of the evening if they're going to be able to play this year. If a division fills up they should be prepared to play in a different division or make plans to split up and have players join other teams. Due to the limited number of courts there is a limited number of teams for each division.

To connect with other teams and players, league coordinator Scott Rogers is asking players looking for teams and teams looking for players to join the Whistler Outdoor Volleyball Association's Facebook page and post their information on the wall. You can also attend the registration event on May 29.

The league gets underway starting June 10 and wraps up on Aug. 19. For more, visit www.wova.ca.

The Whistler Longboard Festival has officially opened registration for their downhill races at the Whistler Sliding Centre, which run from July 13 to 15, opening to the public on July 15 for the finals. Visit www.whistlerlongboard.com if you think you have what it takes.

As well, registration is now underway for a few other fun competitions aimed at beginner and intermediate-level longboarders. Whistler Olympic Park will host the Whistler Longboard Festival Skate X Shoot, a one-day event on July 12. In the morning there will be a 20km endurance race around paved Olympic trails, and in the afternoon there will be a longboard biathlon event open to all skills and ages from 10 and up. A 30-minute orientation is mandatory to take part in the biathlon — possibly the first event of its kind in the world — as athletes will be using .22 calibre rifles at the firing range.

Sponsored by Rayne Longboards, there is $2,000 up for grabs in the endurance race and biathlon.

The Whistler Youth Soccer Club's Under 12 team headed to Kamloops this past weekend to compete in the 34th annual Slurpee Cup.

The team, called The Avalanche, played in the "silver" level competition in eight-on-eight competition. They went undefeated all weekend, and finished with a plus-22 goal differential after just four games to take the trophy.

It was a true team effort, as 11 different players scored and 13 registered assists.

The Avalanche won their first game against the Nelson Selects 8-0, beat the Kelowna Firestorm 8-1, had close game against Terrace YSA that they won 3-2 and then downed the Williams Lake Storm 7-1.

Jake Ellis was the team's high scorer with seven goals, including the game winner over Terrace. Luke Smart also tied that game with a header into the net after the Avalanche found themselves down 2-1.

Next up for the team is the Canada Tournament in Kelowna, where they will play at the Gold level.

The girls Under 17 team also competed, placing third out of four teams in their division, despite a pretty solid performance. They tied their first game against the Abbotsford Hurricanes 1-1, lost a close 2-1 to the Chilliwack Strickers, tied the Mission Chaos 1-1 and then beat the Mission Chaos in a rematch 2-0.

In addition to naming 29 athletes to the national program last week, this week Alpine Canada released a list of 22 additional athletes that will compete next season as part of the national Alpine Prospect Group.

The team consists of 11 men and 11 women, including two men from the Whistler Mountain Ski Club. Ford Swette and Broderick Thompson, both members of the B.C. Ski Team, will be part of the group this year, as well as Tyler Werry from the Fernie Alpine Ski Team. Quebec skiers with the group are Philippe Rivet, Chris Steinke, William St. Germain, and Simon-Claude Toutant, Ontario skiers are Morgan Megarry and Andrew Solomon. Also joining the team are Alberta's Jeff Bell and Robert Overing of New Brunswick.

There are no Whistler skiers with the women's prospect group, but B.C. is represented by Sarah Elliot from Big White and Sarah Freeman from Fernie. Ontario skiers are Candace Crawford, Natalie Knowles, Roni Remme and Julia Roth; Quebec skiers are Stephanie Gould, Valerie Grenier and Maikaela Tommy. Tianda Carroll is representing Alberta.

As part of the prospect group, Alpine Canada will be following the identified athletes over the course of the season, and giving those athletes an opportunity to participate in training camps.

Due to some issues getting results, we missed one result in our mountain bike roundup last week. In the Salty Dog Enduro, a six-hour race based in Salmon Arm, Michael Robinson completed 10 laps of the 11.7km course in just over six hours, with a six-minute lead over the next racer.

Next weekend, from June 1 to 2, marks the return of the Pemberton 4x4 rally, a knobby-tire event where competitors test their machines and driving abilities over a series of events. Competitions include the road rally, hill climb and mud bog.

The event takes place adjacent to the stock car track just south of Pemberton. Events get underway at noon.