This Sunday, July 15 marks the 15th annual Squamish Triathlon: A Memorial to Bob McIntosh, an Olympic distance race and relay that includes a 1,500 metre swim on Alice Lake, a 37km road ride on Highway 99 and through Brackendale and a 10km trail run.
Jul 11, 2012 9:00 PM By: Andrew Mitchell 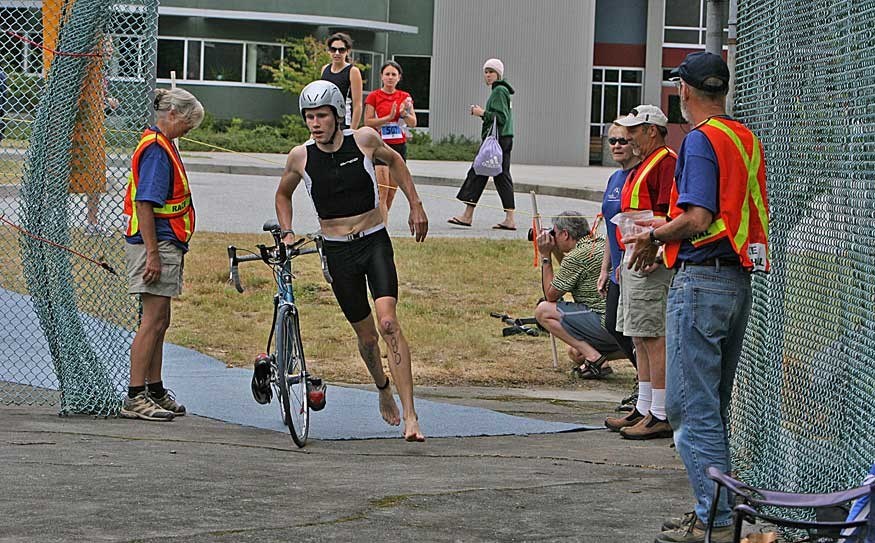 This Sunday, July 15 marks the 15th annual Squamish Triathlon: A Memorial to Bob McIntosh, an Olympic distance race and relay that includes a 1,500 metre swim on Alice Lake, a 37km road ride on Highway 99 and through Brackendale and a 10km trail run. Registration is still available until midnight this Friday, July 13.

If you're in the race, expect hot temperatures and prepare accordingly. Organizers are asking racers to drink lots of fluids the day before and bring fluids to the transitions. There are also four aid stations along the route. Although the trail run has a lot of shade, sun screen is also strongly recommended.

For spectators and residents, be aware that there are road closures and delays in effect for the duration of the event.

• Highway 99 at the Alice Lake Provincial Park intersection will be closed for roughly 20 minutes between 9:30 a.m. and 10:30 a.m. as athletes cross the road to join the race route.

• Government Road from Depot Road to Squamish Valley Road will be closed to northbound traffic from 9:30 a.m. to 1 p.m.

• Ross Road near Brackendale Secondary School will have limited access from 9:30 a.m. to 1 p.m.

• Depot Road from Highway 99 to Government Road will be closed to westbound traffic from 9:30 a.m. to 1 p.m.

For more on the race, visit www.squamishtriathlon.org.

Tenderfoot results are in

There was a slight delay putting together the results from the Tenderfoot Boogie on June 30 — a Squamish-to-Whistler ultra and relay event that returned for the second year — and they were not available for press time last week.

The only female runner to go the full distance was Pushpa Chandra in 13:49:54.

The race started in Squamish and followed the Sea to Sky Trail to Whistler before veering off onto some local singletrack and finishing in Creekside.

There was also a relay category for the 50-Mile distance. The top team, led by Daniel Heath, finished in 9:57:51.

There are two more ultras taking place this summer: the inaugural Squamish 50 on Aug. 11 and the inaugural Meet Your Maker on Sept. 4. Both are 50-mile (80km) ultras and relays.

The Whistler Youth Soccer Association sent three teams to the annual Canada Day Soccer Tournament in Kelowna, with all three teams finishing in the medals.

In the Boys Under 12 group, Whistler went undefeated to place first overall. They let in just two goals in four games while scoring 22 — including a 5-0 win over the OMYSA Jade Electric Light team in the finals.

In Under 14 Girls, Whistler tied for second overall with a record of 2-2.

In Under 16 Girls, Whistler placed third overall. They went 1-2 in the round robin, then beat Summerland House 1-0 in the playoffs to move into third.