Time flies when you're having fun, and fun is definitely the whole point of the now 20th annual West Side Wheel Up mountain bike race — a rip through some of Whistler's best west side trails, followed by a famous afterparty and prize raffle.
Sep 11, 2013 9:00 PM By: Andrew Mitchell 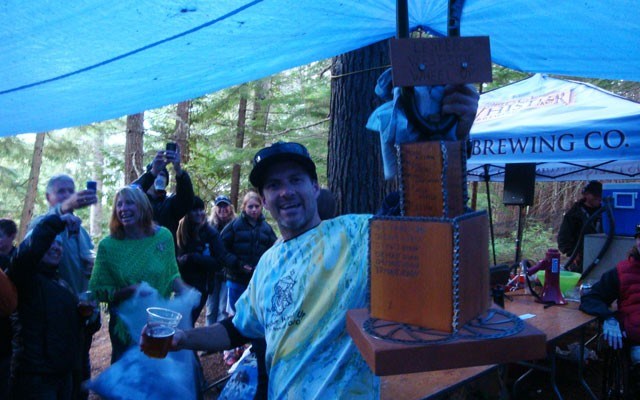 Time flies when you're having fun, and fun is definitely the whole point of the now 20th annual West Side Wheel Up mountain bike race — a rip through some of Whistler's best west side trails, followed by a famous afterparty and prize raffle.

Things are shaping up for the event, which takes place this Saturday, Sept. 14. The course will be a little different this year with "no trespassing" signs going up at the entrance to Lower Sproatt, and instead riders will now go up Stonebridge Road before turning back onto the singletrack at Beaver Pond. After that, the race follows its usual course — Danimal North, Whip Me Snip Me, Rainbow Trail, Bob's ReBob, Get Over It, a section of Emerald Forest and all of A River Runs Through It.

The length is about a Toonie Ride-and-a-half, and the fastest riders take just over an hour to reach the finish. The winners get their names on the trophy and the now traditional tie-dyed shirts.

The highlight, as always, is the prize draw. The main prize is once again a season's pass donated by Whistler Blackcomb. This year, Four Seasons Whistler has donated an annual pass to their gym and spa that's worth $1,200, and there are hotel stays at the Fairmont Chateau and Whistler, plus dozens of other items donated by sponsors.

The cost is $25 to take part, which includes the ride, food and beverages at the afterparty and a raffle ticket. Additional tickets will also be available at the start and finish of the event.

All of the proceeds go towards the BC Para-Alpine Ski Team, which is coached by event organizer Phil Chew. He's seen firsthand how the money helps athletes realize their dreams of making the national team and competing for Canada at the Olympics.

"It's a really good thing for the para-alpine team," said Chew, who explained that the money goes directly to the athletes in the form of grants — over $30,000 so far.

As well, Chew said the race and ride is one of the mountain bike community's better socials of the season.

"It's near the end of the season, and we always get a lot of people that don't come out to many races but make a point of racing the Wheel Up every year," he said.

The after party is in the woods behind Rainbow Park, an area where riders could find shelter in the early years of the race — now one of the longest running mountain bike events in the corridor. This weekend that lakeside location could come in handy with the weather forecast calling for hot and dry conditions all week — and a high of 28 degrees in the afternoon.

Registration is from 10 a.m. until just before noon on Saturday, Sept. 14, with the event getting underway at noon.

The WORCA Toonie Ride season wraps up tonight, Thursday, Sept. 12, with a time trial hosted by Slopestyle Supply, Mt. Currie Coffee Co., Lucia Gelato and Scandinave Spa. Because of the format and earlier sunsets, the start time has been moved up to 6 p.m.

Registration is at the Hydro Cut in Lost Lake Park, which is accessible from the Mons Road/campground entrance to the park, or from Spruce Grove with a longer ride. The course is a mix of trails including the Sea to Sky Trail and Green Lake lookout loop, plus singletrack in Lost Lake Park.

Post-race food will be served at the Hydro Cut after the event, followed by a session in the pools at Scandinave Spa. Bring a swimsuit and towel, plus a headlamp and reflectors for riding home after dark.

The end of the Toonie Ride season isn't the end of WORCA's race season, however. On Saturday, Sept. 21 WORCA is hosting the Whistler Westside Funduro, an event with five iconic descents on Whistler's west side, with riders making all four climbs up the Mid and Alpine Flank trail — Function, Riverside, Alpe D'Huez (27 Switchbacks) and Rick's Roost. As some added incentive for cross-country climbers, riders will be able to deduct a full minute for every climb they ride cleanly.

The cost is $30 and registration is capped at 200 riders.

Whistler's Bob Deeks placed 37th overall in the men's 50 to 54 age group at the Ironman 70.3 World Championships in Las Vegas, Nevada, on Sept. 8, finishing the 70.3-mile half Ironman distance course in five hours, 13 minutes and 11 seconds.

Deeks got faster over the day, coming out of the water 66th in his category. He followed up with 48th place results in his division on the bike and finished with a speedy 1:41:31 half marathon.

To qualify for worlds, Deeks placed 14th in the 70.3 event in Honolulu back in early June.

Saints start off season with a win

The Whistler Saints flag football team started off its season with a win on Sunday, beating the North Vancouver Raiders 26-12. Beynon McKeen scored for the Saints on the opening drive, and added another touchdown in the second half. Liam Forsyth made an interception and added two touchdowns, while Logan Anderson kicked a two-point conversion.

The Saints are still recruiting for the season. The team is open to boys and girls aged six to nine, and play is non-contact. Teams play on a shorter field with nine players on the field at any given time. Practices are Tuesday and Thursday from 4 p.m. to 5:30 p.m. at Spring Creek Community School.

The Broncos peewee team is for kids aged 10 and 11, and Titans minor team for kids 12 and 13. To register, visit www.gslfootball.ca.

The Whistler Mountain Bike Park is closing for the season on Thanksgiving Monday, Oct. 14, but has three events on the schedule for riders in September and October.

This Sunday, Sept. 15, the Bike Park is hosting a Phat Weekend race in the Garbanzo Zone with a $1,500 prize purse up for grabs. The course includes Original Sin, No Joke and other trails, finishing at the Containers.

The entry fee is $20 for people who preregister at Whistler Blackcomb Guest Relations or online before 2 p.m. on Saturday, Sept. 14. Day of race registration, available at the bottom of the GLC stairs, is $25 until 9:30 a.m. on Sunday morning. Awards are 4 p.m. at the GLC.

Details are still being settled for an enduro race on Saturday, Sept. 28, the second of the season for the bike park.

Last, but not least, is the fourth annual Chasse au Tresor scavenger hunt on Saturday. Oct. 12, which includes a now-traditional turkey dinner. More details will be announced soon.