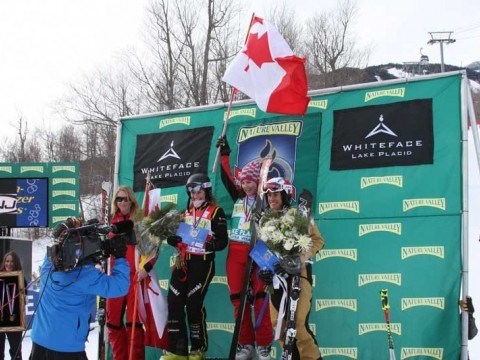 Alpine Canada Alpin has had trouble replicating its 2007 total of 14 World Cup medals and over 50 top 10 placings over the 2008 and 2009 seasons, although the team continues to set records - like the record of four athletes finishing in the top 15 of a men's slalom event that was set just last week.

The team has also had its share of injuries and retirements, the latter due to injury. Missing the Olympics this year are medal contenders Francois Bourque, Kelly VanderBeek, Jean-Phillipe Roy, as well as outstanding rookie Larisa Yurkiw. Whistler's Robbie Dixon bumped his head on a door while walking on icy ground and while he will be in the start gate for the Olympic Games he missed several warm-up World Cup events.

Of the 19 athletes chosen to represent Canada the majority are from Quebec and only seven have previous Olympic experience.

Freestyle: too many athletes for two few spots

The Canadian Freestyle Ski Team has been the most dominant in the world in recent seasons, winning the overall Nations Cup title three years in a row. The disciplines that are included in the Olympics are moguls, aerials and ski cross - a sport that was added to the Olympic roster in 2006. As well, results from dual moguls events and ski halfpipe are included in the rankings.

However, while Canada's medal prospects are high in all three Olympic disciplines the number of spots available to each country is 18 - too few to represent all of Canada's talent in freestyle.

Said association CEO Peter Judge: "We're elated to be sending such a strong team overall with significant medal chances, but we're also saddened to be leaving athletes who have won World Cup medals in the last 14 months, like ski cross racers Davey Barr and Aleisha Cline as well as aerialist Ryan Blais... This underscores the fact that freestyle should be entitled to more Olympic spots."

Canada Snowboard announced its official team for the 2010 Olympics on Monday, with selections based entirely on performance over the past year and some other criteria set by the organization.

The 18-member team - the biggest team allowable by the IOC - has a mix of experienced veterans and first-timers, medal favourites in two out of the three disciplines (alpine racing and snowboardcross) and legitimate contenders in halfpipe as well.

Although the team can qualify up to four athletes for each discipline the team opted to go with two women in snowboardcross and four men, and three men and women each for the other teams.

Six of the 18 qualified athletes have strong Whistler connections either living or training in Whistler. And two - Maëlle Ricker and Mercedes Nicoll - grew up here.

Ricker, the overall World Cup leader this season and a veteran entering her third Olympics, could be considered a favourite, as could her snowboardcross teammate Dominique Maltais who earned an Olympic bronze medal in 2006, one spot ahead of Ricker.

The men's side is more complicated, although Francois Boivin has emerged as a legitimate contender this season. Drew Neilson, a past World Cup champion, almost didn't qualify this year while on the comeback trail from an injury, but made the finals for the first time in Quebec. Mike Robertson and Robert Fagan are also extremely competitive and it's a rare day when they don't qualify for the finals.

Jasey-Jay Anderson will be competing in his fourth Olympic Games, is leading the World Cup standings for parallel giant slalom and has three overall World Cup globes to his credit. He has six medals so far this season. Also favoured on the men's alpine team are Michael Lambert, who has two medals so far, and Matthew Morison, who earned three medals before injuring himself.

Both Kimiko Zakreski and Alexa Loo have proven they can medal on the women's side, but could not be considered favourites just yet. Caroline Calve also led the team at Stoneham and is improving from week to week.

Halfpipe is a tough sport, because only 12 men and eight women qualify for the finals in the Olympics. The usually dominant U.S. team has been hurt by injuries lately to Danny Davis and Kevin Pearce, but top riders from Finland, Japan and now China are filling the gap. Amongst Canadians, Jeff Batchelor has been one of the most consistent riders this season, along with veteran Justin Lamoureux, while Brad Martin is acknowledged for having some of the best tricks in the book. While American Shaun White is the favourite to repeat, anything can happen and the Canadians are more than capable of making the final and winning medals.

The women's halfpipe team has had a rough few seasons with little funding available and have had to pick and choose events. Despite the hardship Sarah Conrad is consistently making the finals. Mercedes Nicoll is riding her best as well and going as big as the top U.S. riders. Palmer Taylor is young and inexperienced by comparison, but is learning quickly.

The snowboard team has set its sights on winning five medals at Cypress - a goal that would have been laughable a few years ago, but is well within reach of the current crop of riders.

Brian McKeever and his brother and guide Robin McKeever are probably the most dominating Paralympic athletes of all time, winning thee medals in cross-country at the 2002 Winter Olympics and six medals in Torino in 2006 - four gold, a silver and a bronze.

But McKeever will also make the record books for another reason this year, as the first Paralympian to be named to a nation's Olympic team. He has also made the Paralympic team and will compete in both Games.

McKeever, who is legally blind with about 10 per cent vision, didn't make the decision to go for the national team because he thought the Olympics were better than the Paralympics, but to show the world that the Paralympians are just as good.

"It's important for people to know the Paralympics is as high as it gets," said McKeever. "It is the Olympic Games for people with physical disabilities, and I hope people will realize through my story the gap is not that big. Just because somebody has a disability doesn't mean they are not training hard or are extremely fit."

Overall the team is strong. The women's side will be led by past Olympic medalists Chandra Crawford and Sara Renner - both of whom have been on the comeback trail this season following a leg injury and a child respectively. Dasha Gaiazova of Banff also made the cut, winning three of four Olympic trial events in December. Gaiazova also proved she belongs on the World Cup circuit with a 12 th place finish last week. Other skiers on the team include Perianne Jones and Madeleine Williams, both making their Olympic debuts.

The men's team is easily the deepest in Canadian history with enough medal contenders to actually field a competitive team in the men's 4X10 relay.

Leading the team is Devon Kershaw who has three World Cup medals to his credit. Ivan Babikov won a gold medal in the last stage of the 2009 Tour de Ski. Alex Harvey is one of the best young skiers on the World Cup circuit today at 21 years old and was on the podium twice last season. George Grey won a bronze medal in the team sprint at the World Cup test event in Whistler last season and is the missing piece of the relay puzzle.

Also making the cut was Stefan Kuhn, who had a strong showing in the Olympic trials in December. Brian McKeever secured his spot with a 21 st placing in the able-bodied world championships in 2007, followed by a win in a 50 km Olympic selection event.

The team will be at Mt. Washington for an Olympic training camp to prepare for the Games, but will race in the Alberta World Cup in Canmore next weekend to tune up.

Whistler athletes who have qualified

Eight Whistler-raised athletes have qualified to represent Canada in the 2010 Olympic Winter Games, although many more have called Whistler home in the past or live close enough that they train here on a regular basis.

Britt and Mike Janyk moved to Whistler with their parents at a young age and both still live close to home. Britt will represent Canada in alpine speed events and Mike in the men's slalom.

Maëlle Ricker is representing Canada for a third time, having attended the Olympics in 2002 and 2006. She has never won a medal, although has come close with fourth place finishes in snowboardcross.

Mercedes Nicoll will be representing Canada in halfpipe for a second time, despite her decision recently to concentrate on more pro events than World Cups and Olympic qualifiers - a decision that paid off with fifth place finish in the one World Cup contest she entered this season at Stoneham, Quebec.

The women's ski cross team may be the most competitive in the world, largely due to the efforts of local racers Ashleigh McIvor and Julia Murray.