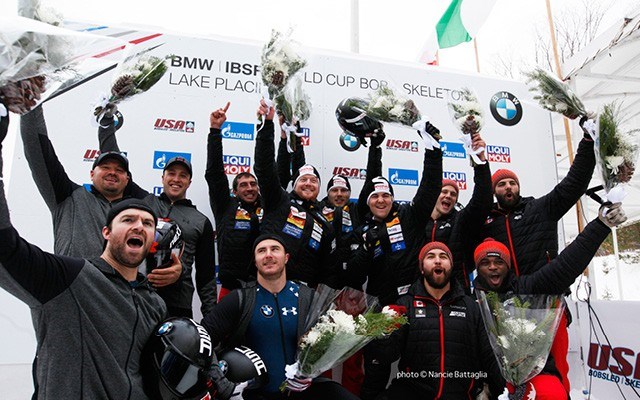 New York, initially, wasn't providing the clean slate Chris Spring was hoping it would in advance of the IBSF BMW World Cup stop in Lake Placid on the weekend.

The 32-year-old bobsleigh pilot looked to bounce back after missing the podium in both races in Whistler earlier this month and after his first few runs, redemption seemed unlikely.

"It was a tough week. Not only was it freezing cold but the track was super fast and it was cut quite difficult as well. Going into the week, my first day of training was really bad and it kind of woke me up to remind myself 'Hey, you're in Lake Placid and this track is no joke' so you better switch on for the rest of the week," he said.

The switch certainly flipped. Spring, who lived and trained in Whistler this summer, took bronze medals in both the two-man and four-man events when the runs counted for real on Dec. 16 and 17.

He hadn't hit the four-man podium in four years, so he was especially thrilled to make a return there.

"It definitely was a confidence boost getting the bronze in the two-man knowing that I was driving well on the track and I just needed to replicate that in the four-man. The boys pushed amazing and for a team that has only come together this week... it was amazing for Sam just to slot in as though he'd never left the team," he said. "Everyone executed their roles perfectly over the weekend and to come away with two medals, I've never done that in a World Cup race in a World Cup weekend, so obviously, I'm pretty stoked about it."

One change was having Montreal Alouettes wide receiver Sam Giguere back from his summer job as he, along with Cam Stones, won their first-ever World Cup medals. Lascelles Brown was also in the sled.

"(Giguere has) been playing football all summer, so I haven't had the chance to race with him since last year. He brings a lot of confidence to the team not just for the other guys but for myself as well. He took the first days of training and even though there were some bad runs, he was just happy to be in the sled," he said. "I took a lot of confidence out of that and going into the race, I was happy with the rest of the days of training and was confident we could put up a good result, which it turns out we did."

Switzerland's Rico Peter piloted the winning four-man sled while American Steven Holcomb was in the runner-up sled. Spring explained he and fellow Canadian pilot Justin Kripps have a solid bond where even though they're rivals on the track, they still hope for the best for one another, which comes in especially handy on difficult courses like Lake Placid.

"The Lake Placid track, you can't really take your foot off the gas anywhere on that track. There are definitely a few spots you can get into some trouble," he said. "Instead of trying to be perfect throughout the whole track, I really just focused on trying to nail a few things every time we went down the track.

"Justin and I have developed this small ritual that we do every time before we go down the track where we'll talk to each other and... ask each other 'What two or three things are we going to work on today?' and really try to nail those down.

"We have a good relationship that way, that we can both be competitive and also help each other to be better athletes."

Though Kripps struggled in the four-man, he nipped Spring for silver in the two-man, placing behind only Holcomb's sled. Spring was choked to be beaten by a hair, but if it was going to happen, at least it was Kripps to do it.

"If I come down and I'm not in first place, I'm kind of upset. If I come down in the second run and see that I'm not still in the lead, but I look over and see that Justin's in the lead, I'm like 'Wow, that's awesome,'" he said. "It would have been even sweeter if we'd tied for the silver. To be beat by a hundredth, it's always tough... but it's always cool to see two Canadians on the podium."

After the Whistler disappointment, Spring planned to investigate his team's equipment in a search for ways to slash more time. While he and his crew made some adjustments, it was too early to credit them for the team's success.

"Whether or not they're worth it is tough to say because the Lake Placid track is such a technical track that it separates the driving ability quite a lot. Thankfully, I had some great runs and I think that's the reason why we were successful on the weekend, as well as we pushed amazingly," he said.

"It's a constant push for the perfect setup and I think there's a few teams that have it right now. Even though we came away with a couple medals this weekend, by no means am I resting and saying that 'Yes, we have figured out how to prepare our equipment properly for the race.' I think we're on the right track but we definitely haven't mastered it yet."

As for the men, Barrett Martineau topped all Canadians with a 14th-place showing while Dave Greszczyszyn took 17th.