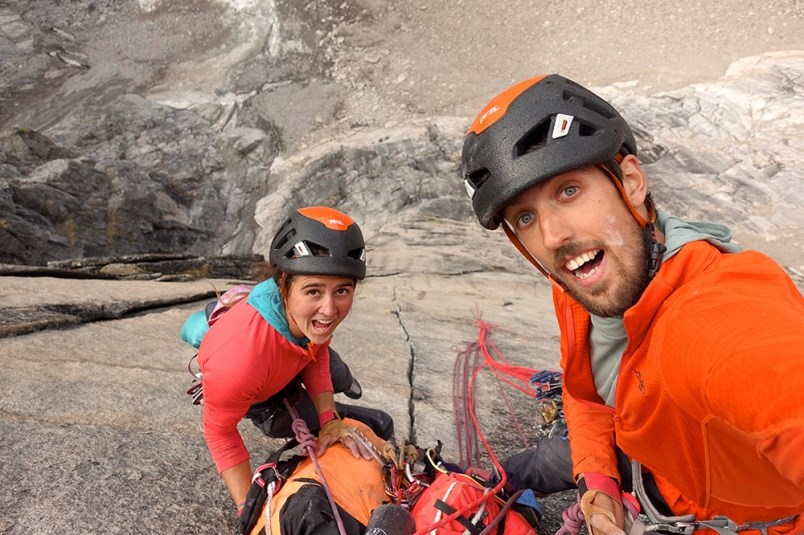 Bronwyn and Jacob on the first ascent of The Niv Mizzet Line 400m 5.13- on an unnamed tower. PHOTO SUBMITTED BY BRONWYN HODGINS AND JACOB COOK

When Squamish climbers set out to conquer new routes, they do it with style.

An inflatable flamingo rushing down whitewater rapids in the Northwest Territories; first ascents of challenging remote peaks; and, believe it or not — a man named Thor climbing Mount Thor, posing at the peak with a Viking helmet and hammer.

This is just a taste of the kind of adventuring from local athletes featured in Ocean to Asgard, a documentary that will be shown at Vancouver International Mountain Film Festival's Fall Series online from Nov. 20 to 29.

Squamish residents Bronwyn Hodgins, Jacob Cook and Zack Goldberg-Poch joined up with Thor Stewart, a Whitehorse resident, to put up a series of first ascents during their trip to Baffin Island.

Hodgins said that she and Cook have been eyeing the area for some time. Both she and Cook — who is her husband — are athletes known around town for their big-wall climbs.

Hodgins has been recognized as the first Canadian female to free climb El Capitan in Yosemite, with her ascent of Freerider, a 5.13a route that became a mainstream landmark since being featured as the climb Alex Honnold completed rope-free in Free Solo.

Cook, when not teaching math, has rubbed shoulders with Kevin Jorgesen of The Dawn Wall fame, and, most recently, finished individually free-climbing all the pitches on Marc-Andre Leclerc's unfinished Wrist Twister project, which has been dubbed Call of the Sirens — a 5.14a multipitch.

"Both Bronwyn and I live for big wall free climbing," said Cook.

"Baffin Island was kind of the obvious biggest stage to take that to in terms of remote big wall free climbing."

The challenge is a marked difference from the type of pursuit one would get from going up the Stawamus Chief, he added. Baffin Island presents an opportunity for adventure climbing, as there are several areas that haven't been touched by any climbers whatsoever.

It's something the team took advantage of.

One of the highlights, he said, was being able to pioneer a new climb on Mount Asgard just one week after arriving.

"We kind of set off totally into the unknown with really no idea what was going to happen, and we were amazingly rewarded," said Cook.

"We ended up finding this basically perfect crack system that took us all the way to the top of the south tower of Mount Asgard. I guess that's kind of like a remote big-wall free climber's dream — to find a crack system like that."

But the trip was far from a serious mission — there was a lot of fun, Hodgins said.

Travelling to and from the climbs was a mission in of itself, that also involved long hikes and white water rafting, among other things.

"We realized we were bringing these like big inflatable sort of technical rafts, that kind of birthed idea of like, 'Why don't we bring a silly inflatable as well and kind of have fun with it,'" she said.

The team originally questioned the wisdom of hauling an extra item that would be of questionable usefulness, Hodgins said with a chuckle, but it paid off.

The alpine flamingo proved to be a sturdy companion that was — with the assistance of being hauled by a proper raft — capable of withstanding punishing waters.

Another highlight was climbing up Mount Thor with a man who bears the mountain's name. Thor Stewart and the team all went up to the peak. For the duration of the trip, he also insisted on wearing a toy Viking helmet.

Hodgins and Cook also said that a major goal that the team had was also to give back to the communities in the area.

They set up anchors near the town of Pangnirtung and hosted a day of free climbing lessons. About 20 kids showed up.

"It was just something that was really important to our trip," said Hodgins.

"We think it's really important to interact meaningfully with the locals and the places where we travel and climb," added Cook.

Heather Mosher, the director of the film, said it's a different beast putting together a documentary where all the footage is self-shot.

The team took many hours of film and sent it to her to cut and put together.

She said it creates a certain honesty, as self-filmed moments are often the most candid.

"There's nothing to hide. They have full control of the process," said Mosher. "It's super honest — almost to a fault."

It also presented a few creative challenges, as some highlights such as a 5.13- climb that couldn't be self-filmed. In cases like that, extensive interviews were used to recreate the scenario, she said.

With that being said, Mosher said that she aimed to create a film that would appeal to non-climbers as well, given its focus on universal themes like friendship. She said she hopes it can inspire others to go outside and find their own adventures.

Mosher added that she's devised a test as to how well a non-climbing audience can relate to the film.

"My test is can I show this film to my dad and will he enjoy it?" she said. "If my dad watches the film and likes it, it's good. It's like this is good to go for a general audience."

And apparently, it passed the test.

"He loved it," Mosher said.

More information on Hodgins' and Cook's adventures can be found at bronandjacob.com.

• Bronwyn and Jacob made the first ascent of "Never Laugh at Live Dragons" 5.10+ 600m on the South Face of the South Tower of Mount Asgard.

• Thor and Zack made an ascent of Polar Thievery 5.11a 400m on the North Tower of Mount Asgard.

• Jacob and Bronwyn repeated the Scott-Henneck route via a new 3 pitch free variation at the top, 5.11+ 900m on the North Tower of Mount Asgard.

• Thor and Zack made the first ascent of "Mount Zacky," an unclimbed sub-summit of Mt Midgard via "Beach Vacation" 5.10+ 600m.

• All four team members made an ascent of Mount Thor via the South Ridge route 5.8.

• Over two days Jacob and Bronwyn made the first ascent of "The Niv Mizzet Line" 5.13- 400m on an unnamed west facing tower adjacent to the North Face of Ulu peak.

• Over two days Thor and Zack made possibly the first recorded ascent of Ulu Peak via their new route "The Beached Whale" 5.10+ A1 600m.

What follows are the route descriptions and grades set by climbers Bronwyn Hodgins, Jacob Cook, Thor Stewart and Zack Goldberg-Poch during their trip to Baffin Island in Summer 2019. The files were submitted to The Chief by Hodgins and Cook.