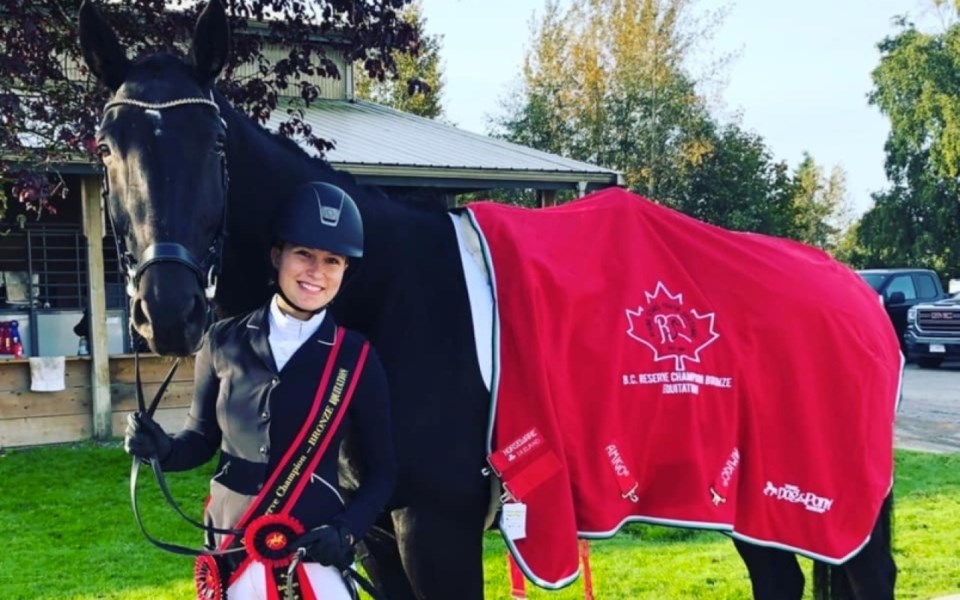 A local Squamish athlete — and her four-legged companion — put on an award-winning performance in one of the biggest equestrian events of the year.

Isabella Fietz is the Rising Star Equitation Reserve Champion for British Columbia, Bronze Division after her showing Oct. 4 at the Pacific Regional Dressage Championships 2019 in Langley.

The Howe Sound Secondary School student wasn't alone when she made it to the podium at Thunderbird Show Park. She had help from a horse that, up until recently, was mostly unemployed.

"The horse that she was riding, Remington, just eight months ago, was basically in a field. He had no job, no kind of career or path and they took him and she's been working with him," said Wes Schild, who coaches Fietz.

Schild says that Fietz's win is a major mark for those in the world of dressage.

"Well, definitely for our neck of the woods, this last championship of the year is a pretty big deal," said Schild, who works at Riverlands Equestrian Facility. "Thunderbird attracts some of the best riders, trainers, horses — for definitely the West Coast, the Number 1 show to hit. So it's definitely a big deal."

Dressage can be compared to ballet for horses, Schild said.

The animals are guided by their riders to do a series of intricate movements and are scored based on that performance.

Fietz's accomplishment is especially noteworthy given that the talent she had to work with was especially raw.

"Definitely for the horse, to get him where he is, fitness is a huge component," said Schild.

"He was quite heavy and overweight and not used to working, so we had to get him past that."

Kim Lawrence, who owns Remington, said that he's come a long way from his days lazing about in the field.

However, he hasn't lost his "goofball" spirit and is willing to give horse hugs, wherein he draws someone close and wraps his neck around them.

"He is a character," added Lawrence. "He is an absolute character."

Riders have to put in a lot of work too though. They need to have a sharp memory to learn all the detailed movements necessary to execute a routine.

They also need a good command of their animal to convince the horse to go through the actions, and fitness, of course, is a given.

"It's been great to see. 'Bella is a super-talented rider," said Schild. "To have it pay off at the end of the year is just super nice."