Event a success despite challenging conditions
Nov 9, 2011 7:28 AM By: Andrew Mitchell 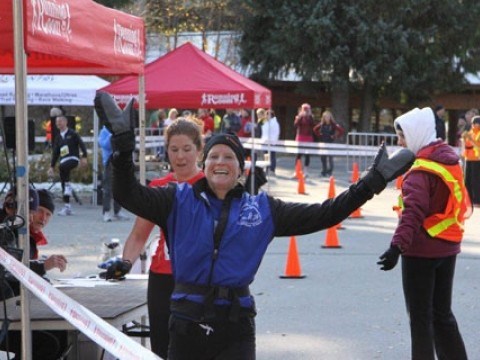 The conditions went from snowy and wet to cold and icy during the Whistler 50 Relay and Ultra on Saturday, but nothing competitors couldn't handle. Of the 52 runners who turned out for the Ultra portion - 50 miles or 80.5 kilometres - 46 finished the full distance.

On the men's side, Chris Downie of Burnaby averaged a kilometre ever four minutes and 25 seconds to finish the almost double marathon distance in a blazing five hours, 52 minutes and seven seconds. Darin Bentley of Surrey was second in 5:55:34, while Hassan Lotfi-Pour of North Vancouver placed third in 6:24:13.

There were four female runners from Sea to Sky in the race, all of them doing incredibly well. Jen Segger of Squamish placed fourth overall and first among women in 6:31:20, averaging 4:54 per kilometre from start to finish. She also won the Under 40 age category.

Segger left town after the race but referred Pique to her blog entry from the event.

"I didn't approach this race with any huge expectations other than I wanted to go sub eight hours and I didn't want to finish with an injury," she said. "Looking at my training log, it's not exactly how you set yourself up for a 50-miler... I trained hard the past 10 days, including one run from Squamish to Whistler at a very easy pace and then lots of speed work."

The speed work was for the Honolulu marathon in December, which will round out Segger's incredible race season. At this point she's completed nine ultra runs ranging from 50km to 161km, a one-day adventure race, a half Iron, the Kelowna GranFondo ride Ultraman Canada (roughly a triple Ironman race) and the Kaslo Sufferfest.

The only drawback for Segger in the Ultra was being stopped by a train for over 20 minutes, which cooled her down.

"When the train finally decided to move again, my body didn't want to," she said.

That was on the third lap, and Segger said it took an hour to warm up again properly - at which point she was in second place and four minutes behind North Vancouver's Nicola Gildersleeve, a very experienced ultra runner. Segger managed to catch her by the last transition and by the end she was back in the lead by about six minutes.

Margreet Dietz of Squamish placed 13th overall, was fourth among women and was first in the 40 to 49-age category in a time of 7:57:16.

Whistler's Christine Suter was 18th overall and fifth in the 40 to 49 age category with her time of 8:07:50 - almost two hours faster than her goal of finishing in under 10 hours in her first ultra experience.

"It was both easier and harder than I imagined," she said. "I was surprised that I could keep up my pace, but that's exactly what I trained - all my training runs were 10km/h - and that's what I was able to do more or less. I did get a little slower at the end and it was a little harder to get up the hills."

Suter didn't mind the loop format and said the atmosphere was great. "You knew where to go, you knew that there was a hill up ahead that you have to get up or that you have eight kilometres to go. For me, it was breaking it down all the time into smaller pieces. And just to see everybody out there - I ran into people walking their dogs or watching the race, or honking their horns at me from the highway. That was so cool. I definitely wouldn't have gotten that anywhere but my home town."

While Suter is no stranger to marathons or Ironman triathlons, she enjoyed her first ultra running experience. While she has no plans to run a 100-miler, she would run another 50-mile race in the future.

"At the finish my ultra running sister was there, and my first thought is that I don't know how you would do all that again to do 100 miles - that's mind-boggling to me."

Marla Zucht of Whistler placed 19th overall and was fifth among women under 40 in 8:13:27.

Whistler's Mark Schmidt got off to a fast start and was in the top 20 through the first four transitions, but was forced to pull out just past the halfway point.

The relay event was for teams of up to eight, with four athletes running the 12km loop and four running the 8km loop.

The fastest group in the race was Team Honey Bucket, based out of Richmond. They completed the course in 4:05:13, with runners averaging a kilometre every 3:24.

The Beaver Buzz Racing Team out of Langford, which included Whistler brothers Morgan and Joren Titus, was second in 4:16:27 while VFAC Flight of the Falcons from Surrey were third in 4:44:33. All three were in the Open Men category.

The top Open Women team was Team BAC from Vancouver, placing fourth overall in 4:50:24. The Women of Hershey, actually of West Vancouver, were second in 5:15:46. The VFAC were third in 5:15:48, just two seconds back.