Team Burke comes through in the shootout

Sea to Sky Hockey Challenge another success, raising $50K for athletes
Mar 4, 2005 2:32 AM By: Andrew Mitchell 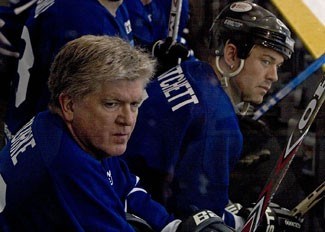 By the time the puck dropped for the second annual Sea to Sky Hockey Challenge on Sunday, Feb. 27, it was standing room only at Meadow Park Sports Centre arena, with approximately 500 tickets sold.

Fans were treated to three great periods of hockey, with former and current NHL stars teaming up with sports figures and celebrities to raise money for the PacifcSportÕs PodiumFund. The PodiumFund provides funding to CanadaÕs top provincial, national and international prospects to help with training, housing, travel and food costs.

In total, the events in Vancouver and Whistler raised approximately $50,000 for the PodiumFund, or more than double the $20,000 that the inaugural Sea to Sky Hockey Challenge raised in 2004.

According to Challenge organizer Will Davis of Destination Funny Entertainment, the event will definitely be back next year.

"ItÕs a labour of love for us, the comedy communityÕs way of being part of the community in 2010," said Davis, who also works as a stand up comic. "We donÕt want to be sitting on a couch during the Olympics moaning, Ôwhy did we finish 37 th Õ, so this is what we did. This is our way of giving back to the athletes."

The success of the event hinged on the participation of people like former Canucks GM Brian Burke, who got behind the project from the beginning. With the Canucks involvement it was easy to get former NHL stars to sign on, which in turn made it easier to get celebrities and amateur athletes to volunteer. It also made it easier to find sponsors like Re/Max, CTV, Jack FM and Fairmont hotels.

Next year Davis is hoping to build on that success by offering more entertainment in Whistler, as well as by lowering ticket prices. This year tickets were $25, up from $20.10 last season.

"From the beginning our goal was to ensure that this event would always be affordable, and IÕd still like to see the ticket prices come down," said Davis. "We think weÕd get an even bigger turnout, which would allow everyone out there to support Olympic athletes. It was never about creating an event for the high mucky-mucks Ð there are already a lot of those, and we hope theyÕll still come to our event and bid on the silent auction items. But this really is all about ordinary people coming together to watch some great hockey and support their athletes."

As for the games in Vancouver and Whistler, Davis says the feedback has been incredible. The Whistler event was special for several reasons Ð not only did the game go to an overtime shoot-out, it also gave fans a chance to see skaters like future hall-of-famer Igor Larionov and the Vancouver CanucksÕ Mattias Ohlund up close.

"Keep in mind some of these guys are big stars and they werenÕt getting paid anything. They did it because they wanted to, and they really got into it," said Davis.

"The Whistler event is just so intimate. The fans really get to meet the players, and all the kids get their stuff autographedÊÐ if anything we need to come up with ways to make the Whistler event even bigger next year."

The Whistler Winterhawks girlÕs hockey team held the 50/50 draw, earning $485 towards their season.

Team Burke, led by former Vancouver Canucks GM Brian Burke, got off to a strong start in the first period with a goal by Doug Risebrough, picking up the rebound after a long shot by Mattias Ohlund.

The next goal came just a few minutes later. This time it was Cammi Granato, the captain of the U.S. womenÕs hockey team, that picked up the rebound and her first goal of the night.

Team Nonis, led by current Canucks GM Dave Nonis, tried several times to even the score but were thwarted by some incredible goaltending by "King" Richard Brodeur, who was pretty sharp at 52 years old. His best save of the period was a slashing glove save on former Canuck and Leaf Jyrki Lumme.

Meanwhile goalie Danielle DubŽ, the goalie for the Canadian womenÕs squad, kept Team Nonis in the game with a number of solid saves. After two rebounds and GranatoÕs second goal, she got into a groove and didnÕt allow another goal until she stepped aside for the backup goalie in the second period.

In the opening minutes of the second period musician Barney Bentall put Team Nonis on the board after taking a pass from Brad May. Geoff Courtnall scored the next goal for Team Nonis to put the score at 3-2.

Team Burke added some cushioning with GranatoÕs third goal of the game, and went up 5-2 on a goal by Cliff Ronning.

Team Nonis came out hard in the third period, scoring three unanswered goals. The first was by Nonis himself, assisted by Greg Adams. Brad May beat Brodeur with his wrist shot to make it 5-4. May then tipped in a shot by 54-40 frontman Matt Johnson to tie things up. With less than two minutes on the board, Geoff Courtnall scored his second of the game to put Team Nonis ahead 6-5. With 30 seconds left, Bruce Courtnall took a pass from Russ Courtnall and put it in the empty net to put Nonis at 7-5. That goal was disallowed as a two-line pass, and with 13 seconds left in the game Team Burke tied the game 6-6 with a goal by Cliff Ronning.

Trevor Matthew from Team Burke, a player who bid on a spot to play in the Challenge on eBay, was first on the board after a beautiful move on the goalie, but Greg Adams on Team Nonis matched up a few shots later. Ray Ferraro put Team Burke ahead once again, only to have Lumme tie things up yet again. After a series of brilliant saves on both sides, the last skater was Igor Larianov on Team Burke. Larianov deked the goalie and gave Team Burke the win by a score of 9-8.