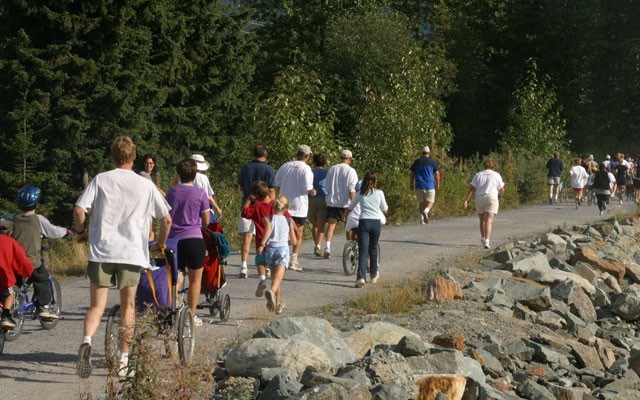 run like a fox The Terry Fox Run returns this Sunday at the Four Seasons. File photo

The Terry Fox Run is hitting a major milestone this weekend.

The 35th annual run to raise money for cancer research will be hosted this Sunday (Sept. 20) at the Four Seasons. Registration begins at 10 a.m. while the run starts at 11 a.m. The proceedings are expected to wrap up around 2 p.m.

Local organizer Lindsay Lawler noted it can be somewhat difficult to gauge turnout without requiring advance registration, but she hopes for about 300 people.

"It depends on the weather," she said. "Typically, in years past, we average 300 people."

After raising roughly $15,000 last year, Lawler hopes to exceed that number this year.

Lawler noted there are also plenty of raffle prizes up for grabs at the event.

The courses will take runners through Lost Lake once again, though there are changes to both the 4.2-kilometre and 7.2-kilometre options. Lawler noted the short course would be similar in difficulty to past years, while the longer one may be a little more challenging.

"There's a fair bit more uphill and trail running," she said of the longer course.

Those looking to register in advance can do so at terryfox.org/run.

Tie at Barbie and Ken Race

There was a tie at WORCA's Barbie and Ken Race held over the weekend, but it wasn't of a knot.

The event, which saw couples complete cross-country, downhill and enduro races on Sept. 11 and 12, had the teams of Michael Watt and Leonie Picton and Yoann Barelli and Katrina Strand even at the end of the three events.

Shane Gayton and Kate Whitley rounded out the podium in third place.

In other WORCA news, the organization will hold its annual general meeting Thursday night (Sept. 17) at the Cinnamon Bear Bar and Grill at 6 p.m.

All board positions are up for re-election and there are even a few positions to fill.

Westside Wheel Up this Saturday

Hit the trails for a good cause this Saturday (Sept. 19).

The 22nd annual Westside Wheel Up will take to the trails at noon, as riders make their way to the Rainbow Park finish line.

Registration, which costs $25, begins at 10 a.m. at the Whistler Brewing Company location in Function Junction. Riders must be members of WORCA.

Several trail runners got their groove on in the south end of Whistler on Sept. 5.

In the 11.5-kilometre Brandywine Boogie race on the Sea to Sky Trail that ended at Brandywine Falls Provincial Park, Chris Bowen took the overall win with a time of 49:53.3, while Jeff Thompson (1:56 back) and Johnny Adams (2:18 back) were also among the top three men.