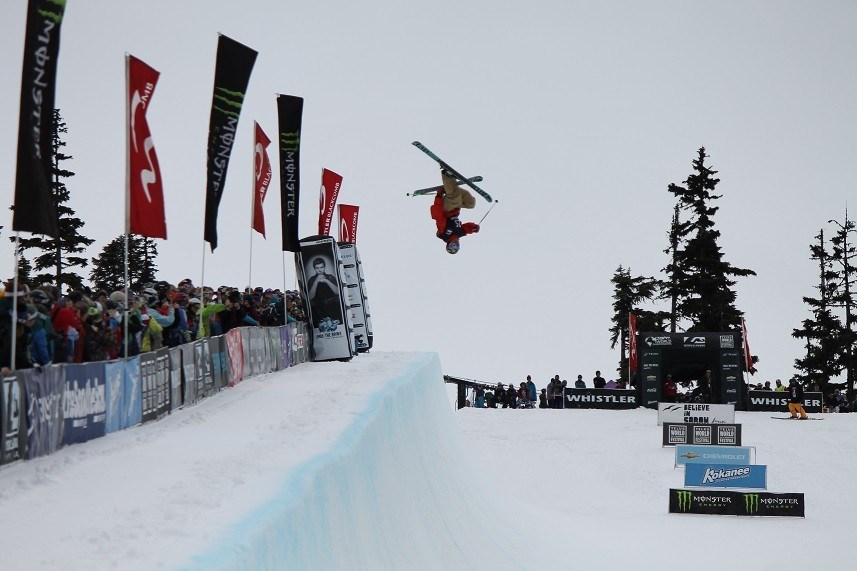 Mike Riddle in the middle of a very inverted corked double 1260 on Sunday afternoon. By Andrew Mitchell

Despite the lack of sunshine, spring skiing conditions were very much in effect on Blackcomb Mountain on Sunday with slushy snow, slow takeoffs and soft landings for the AFP superpipe championships.

It was a good day for Canada overall with Mike "The Riddler" Riddle taking the men's event with a score of 92.6. Thomas Krief of France was second with an 87.0 and Joss Christensen of the U.S. third with an 85.2. Gus Kenworthy, who won the slopestyle and big air, was noticeably absent for the contest but noted the night before that he hadn't had a chance to ride the pipe all week and likely played it safe.

Riddle's run was the best of the day with lots of air time, grabs on every trick and clean landings from start to finish. His first hit was a huge double corked 1260, followed by a stylish nine on the left wall, another stylish 900 on the left wall, a flatspin 360 and a switch 900.

Riddle wiped away a few tears of joy at the finish line.

"It's been a really tough season," he said. "I haven't had any big results this year and I've been struggling a lot mentally. And it's been a tough year for the whole ski community in losing Sarah (Burke). I'm just really happy to end this season on a good note, and to be looking forward to the next one."

Riddle, one of the larger skiers in the pipe, said an equipment change and home field advantage made a big difference with the conditions.

"I have brand new skis that I've been trying to get all year and they’re super stiff so they support me," he said. "So that’s a huge factor. I don’t know... I just feel at home here and I feel confident."

Not until the event was over could Riddle relax, with all of the finalists more than capable of taking the win away. "I didn’t know if it would be good enough," he said. "(Canadian teammate) Justin Dorey was throwing down and if he landed his run he had a really good shot at beating me. I was pulling for him, I like to see my friends land their tricks and celebrate, but I'm still happy with my result. It was kind of nerve-wracking sitting at the bottom and watching people come down, but at the same time it's all part of it."

Riddle is currently living in Vancouver but is considering a move to Whistler to be closer to the team and training. For the next few years leading up to the Winter Games in Sochi, the team will be based out of Whistler.

In the women's contest, Maddie Bowman put together a smooth run with a corked 900, 720 and a couple of big 540s to take first place.

"I'm stoked," she said. "Training went really well for me, and after that it was, 'okay, let's just chill out for a second,' and it worked. Maybe it's skiing in Whistler because I love this place, and it was nice to be in a soft pipe because it reminds me of being at home (in California)."

Bowman's score was a 93.2, followed by Anais Caradeux with an 85.0 and Squamish's Rosalind Groenewoud with an 83.6.

A third place result guaranteed Groenewoud the overall AFP superpipe title, but it came down to the wire after she crashed in her first run in the finals. The second run didn't go as planned either, but experience took over and she pulled it off.

"I was definitely happy to land my second run," she said. "It wasn't the run I was going for, I messed up at the top and had to freestyle it, pull something out of my pants and make up a whole different run. I was a little disappointed not to complete the run I'd been training and felt really comfortable with, but I am happy with the overall AFP title for pipe because I had a really good season."