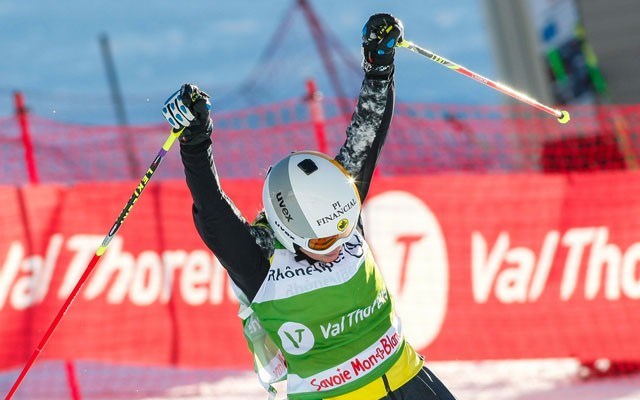 Winning twice was nice for Marielle Thompson in France.

The local ski-cross racer swept both races at the Audi FIS World Cup Ski Cross stop in Val Thorens, France on Jan. 9 and 10. In the first event, the final was a back-and-forth run between the four competitors as teammate Georgia Simmerling made a pass to go from last to first in the latter stages. Ultimately, though, Thompson's final charge was enough to give her the photo-finish victory by mere millimetres over Simmerling.

The next day, Thompson claimed her third consecutive victory on the World Cup circuit — a new personal best — by surging past France's Ophelie David early in the race's second half before holding off Sweden's Anna Holmlund for the win.

Thompson explained the course is one that amplifies her approach to the sport.

"This course really plays to my strengths with big features that need to be pressed as well as fast, straight sections that allow me to glide. Overall the course is lots of fun as well as super competitive and that makes for great racing for both men and women," Thompson told the Alpine Canada website.

Attempts to reach Thompson for further comment after the race were unsuccessful.

On the men's side, Calgary's Brady Leman hit the podium in Saturday's race for the first time since last March, taking a bronze behind Switzerland's Marc Bischofberger and France's Jonathan Midol.

Val Thorens is located in southeastern France near the Italian border, about seven hours' drive from Paris, where attacks on the office of a satirical newspaper and in a kosher grocery store led to chaos last week.

The World Cup chase continues at the FIS Freestyle World Championships in Kreischberg, Austria on Jan. 25.

The day before, he posted a score of 90.25 to hold off Australian Matt Graham's silver showing of 85.49. Fellow Canadian Philippe Marquis made the final, but lost control of his run to narrowly miss the podium.

The victories are an encouraging turn for the 22-year-old Kingsbury, who took over as the FIS overall points leader with his success.

"We started the season in Ruka in December and I wasn't skiing well," Kingsbury told the Canadian Freestyle Ski Association website. "I am way more confident now. I'm having fun and I know what I need to do to win. I'm not putting pressure on myself and that's when I ski my best."

On the women's side, Justine Dufour-Lapointe of Montreal hit the podium twice over the weekend, taking the overall points lead from sister Chloé in the process. That included a gold in the dual moguls after edging out American Hannah Kearney 19-16.

"I really gave everything out there. I didn't want to leave it to chance against Hannah. I was so happy when I won, but the thing I was most proud of was my consistency. I was so focused going up against her. I knew it was going to be a great challenge. Going to the World Championships in Austria with the yellow bib will be amazing," Dufour-Lapointe told the CFSA site.

The skiers will next compete at the FIS Freestyle World Championships in Kreischberg, Austria. The moguls event takes place Jan. 18 and the dual moguls event is slated for Jan. 19.

It'll take more than an injured shoulder and poor snow conditions to keep Kimberly Joines from giving her all.

The Rossland, B.C. sit-skier posted a silver-medal showing in the slalom event at the IPC Alpine World Cup stop in La Molina, Spain on Jan. 11, finishing 1.34 seconds behind winner Claudia Loesch of Austria.

"Overall my skiing was quite good. It was a pretty rough course and I think some of my competitors may have experienced that today, but that is the type of course we raced," Joines told the Alpine Canada website. "The conditions favoured my style of skiing, as I have the strength to muscle through it and stay on track. I am very happy with my performance."

Joines also hit the podium in the Jan. 10 race, placing third, 9.53 seconds behind winner Laurie Stephens of the U.S.

Meanwhile, visually impaired skier Mac Marcoux of Sault Ste. Marie, who is guided by brother B.J., was second in the men's slalom on Jan. 10. Marcoux was 2.26 seconds behind winner Valerii Redkozubov of Russia.

Marcoux also took bronzes in the slalom races on Jan. 8 and 9.

The second World Cup event will take place in Tignes, France from Jan. 26 to 30 and will wrap up in St. Moritz, Switzerland from Feb. 2 to 5.

In other parasports news, Big White Ski Resort near Kelowna will host the IPC Para-snowboard World Cup stop on Jan. 17 and 19. It's the first such event in Canada following the sport's inaugural launch at the 2014 Winter Paralympic Games in Sochi, Russia.

Local resident John Leslie is among the Canadian contingent slated to take part.

Calgary luger Alex Gough kicked off 2015 with a little hardware.

The 27-year-old, competing in just her second race of the season, slid to silver with a time of one minute, 41.76 seconds at the FIL event in Kongissee, Germany on Jan. 3. Gough enjoys that stop, as she has now won six of her 20 World Cup medals at that particular track, though the previous five were all bronze. Germany's Natalie Geisenberger took the gold with a time of 1:41.41.

There's a reason for her success, she said, as the track is located in the hometown of Canadian head coach Wolfgang Staudinger.

"This is a home-away-from home for us so I really like this track," Gough said in a release. "We spend a lot of time here. When we have weeks off in Europe we do a lot of training here. It is a comfortable track for me and it is a lot of fun to slide on."

The next day, Gough led the Canadians to a bronze in the team relay. Sam Edney and the doubles team of Justin Snith and Tristan Walker teamed up to contribute to the time of 2:46.39. Germany won gold with a 2:44.49 showing.