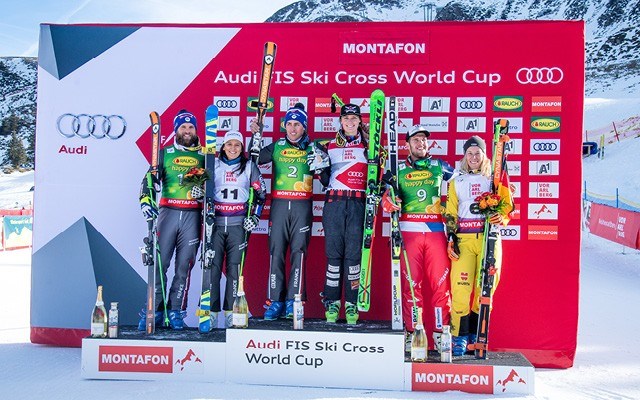 MARIELLE'S CHRISTMAS Marielle Thompson (third from right) celebrates her third win of the season in Montafon, Austria on Dec. 17. Photo by GEPA Pictures/FIS

The 24-year-old Whistler ski-cross star has only been unable to top the podium in one race as she's opened up a significant lead on the rest of the pack as she chases her third FIS Crystal Globe.

Georgia Simmerling, meanwhile, took eighth for her best result of the season so far.

The men were also strong in Austria, even if they didn't snag any hardware. Kevin Drury matched a career-best fourth while Whistler's Dave Duncan was sixth, just ahead of Kris Mahler.

Veterans Brady Leman and Chris Del Bosco struggled, however, failing to make it out of the heats. France took the top two spots with Jean Frederic Chapuis and Jonas Devouassoux winning gold and silver while Switzerland's Marc Bischofberger notched third.

There was some concerning news in the ski-cross world this week as Swedish star Anna Holmlund was placed in a medically induced coma after a crash while training for Tuesday's race in Innichen, according to Reuters.

Holmlund, the 2014 Olympic bronze medallist in a race in which Thompson won gold, is second in the overall standings after winning the Crystal Globe the past two seasons. The Swedish Ski Association said in a statement that Holmlund's vital signs were strong and she is in stable condition.

On the men's side, Kevin Drury took sixth and Brady Leman was 10th. The other Canucks finished in the bottom half of the pack with Dave Duncan in 25th, Kris Mahler in 27th, Ned Ireland in 34th and Ian Deans in 47th. A second race is slated for Thursday, Dec. 22 before the circuit breaks for the holidays.

The 2010 FIS super-G champion took third in the discipline at the Italian venue where he's enjoyed plenty of success, as he now has earned five medals there. Guay was just 0.13 seconds behind winner Kjetil Jansrud of Norway while Aleksander Aamodt Kilde, also of Norway, placed second.

"Today was a great race with really good conditions," Guay told the Alpine Canada Alpin (ACA) website. "I always enjoy coming here and it feels so great to be back on the podium. I love this track and I feel like the terrain really suits my style. I had a great start number and I'm really happy with how I skied. I have been building my confidence this year with a good start in Val d'Isère and a great finish today."

Dustin Cook, meanwhile, took sixth in his comeback from injury, showing he's feeling strong and ready to compete in 2016-17.

"The track was epic today and the snow was perfect," Cook told the ACA site. "The set was really fun. It was a straight-forward set and it was really fun to race. It feels really amazing to be back. This is what I've been working towards since I got injured last season. To do it on my second race back, to be in the top 10, is awesome. It feels great to be back in the top 10 and have the confidence to take into the rest of the season."

Guay hit the top 5 again in the next day's downhill, placing 0.56 seconds back of Max Franz of Austria. Norway's Aksel Lund Svindal was second and American Steven Nyman placed third.

As for the women, Marie-Michele Gagnon was the lone Canadian to make the finals of the Val d'Isère downhill on Dec. 16, placing 4.32 seconds back of winner Laurenne Ross of the United States. Austria's Cornelia Huetter and Slovakia's Ilka Stuhec also hit the podium.

Gagnon was 21st in the Alpine combined the same day, 3.60 seconds back of Stuhec, who edged Switzerland's Michelle Gisin and Italy's Sofia Goggia for the win.

In the Dec. 17 downhill, Valerie Grenier was the only Canadian to place, taking 40th, 3.37 seconds back of Stuhec.

Huetter and Goggia took the other two podium positions.

Whistler racers are enjoying an extended stay in Panorama leading up to Christmas.

Brodie Seger, meanwhile, took second in both super-G races while notching a sixth-place finish in the giant slalom.

James Crawford tied Seger for second in one of the super-G events while also scoring a third in Alpine combined and fifth in giant slalom.

Broderick Thompson, meanwhile, took a pair of top 10s with a fifth-place super-G highlighting his week.

As well, Riley Seger took three top 10 finishes, with a sixth and 10th in the super-G races and a seventh in Alpine combined.

The International Bobsleigh and Skeleton Federation announced earlier this month it would pull the World Championships from Sochi, Russia after a number of athletes threatened to skip the event.

A new location had not been determined at press time.

A vocal contingent of athletes had said they would not go to Russia after a World Anti-Doping Agency report implicated over 1,000 Russian athletes in 30 sports, including several who competed at the 2014 Winter Olympic Games.

In a release, the IBSF Executive Committee said, "during this difficult time it is prudent not to organize such an event in Russia."

The Whistler Sliding Centre offered its venue for the event, but the IBSF opted to keep the races in Europe, selecting Konigssee, Germany as the new site.

A number of Whistler Gymnastics competitors came home with hardware from New Westminster on Dec. 10.

As for the double mini trampoline event, Whistler competitors swept the level 2 men's division with Roth-Wallman, Van Dongen and Susko placing first, second and third, respectively. Sutton was third in the level 2 women, while Ella Soane was sixth.

In level 1, Vazquez Vela placed 11th while Darby Soane was seventh in the 10 and under category.

Roth-Wallman, meanwhile, was named the Gymnastics BC athlete of the year in the male trampoline provincial stream in November after posting the highest average score in the province.