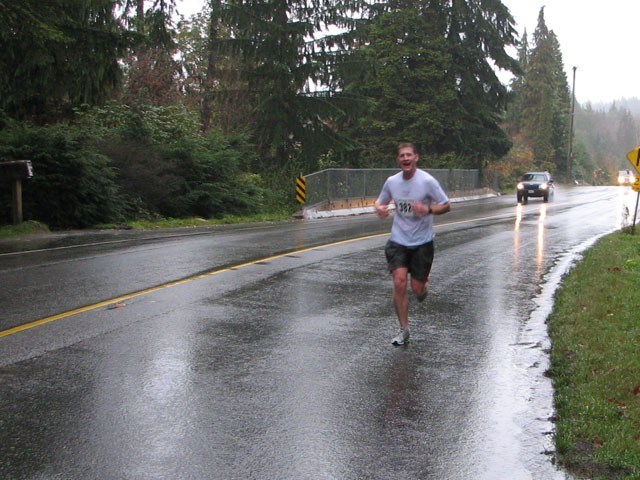 Wet Out Craig Johnson runs the third leg of the Haney to Harrison.

The annual Haney to Harrison Road Relay took place this past Saturday with close to 250 teams of eight taking on a 100 km course from the Maple Ridge area to Harrison Hot Springs. Times ranged for 5:42:12 for the Vancouver-based Peninsula Runners, to more than 11 hours.

There were three Whistler teams in the race this year, as well as local runners competing with other teams.

The top Whistler team was I Really Don’t Wanna Run, which completed the race in 7:32:19. They placed third in the Open Mixed category and 18 th overall.

The third leg was the longest at 15.12 km, and started off with a brutal climb from the Stave Falls Dam. Kevin Titus took that leg, placing sixth in 57:07. His son Morgan, running for the Vancouver Beaver Buzz Racing Team, was third on that leg in 50:01.

The fourth leg was the second-longest at 14.42 km, and included a knee-punishing downhill into the Fraser Valley. It was also completely unsupported because of race vehicle restrictions, and runners had to bring their own water. Liz Cullen did the honours for the team in 1:13:35.

The seventh leg is just 13.31 km, but is one of the hardest with a long climb at the start and a steep grade back down to the Fraser Valley.

Aaron Heidt of Squamish, who has won several off-road races in the Sea to Sky Trail Running Series, was third on the leg in 46:51 while racing for the winning team.

Scott Taber of Whistler ran with Got Lact-Eight?, handling the fourth leg. He finished 14 th in 58:05, as his team went on to place ninth overall and sixth among Open Men.

This year 33 runners attempted the entire 100 km course, and all but six finished in weather conditions that were cold, wet and often windy. The top male was Surrey’s Darin Bentley in 7:39:44, more than half an hour faster than the next runner.

The top female in the race was Tania Whelan, who completed the course in 10:15:22.

Wendy Montgomery of Brackendale was one of the runners to attempt the full course who pulled out.

Complete results are online at www.raceheadquarters.com.