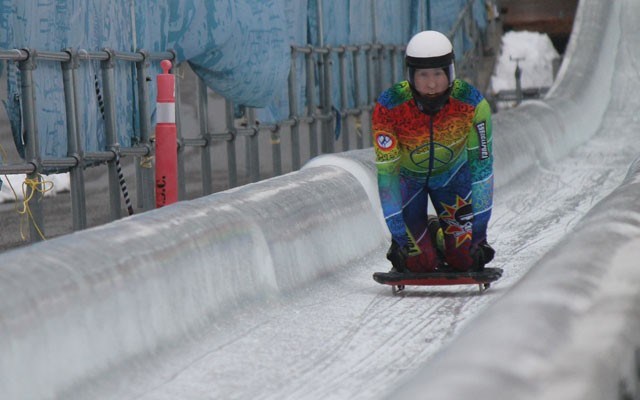 Colourful entrance Hugh Maguire, making his competitive skeleton debut at age 52, slides into the finish dock at Whistler Sliding Centre during BC Bobsleigh and Luge Association racing on Feb. 7. Photo by Dan Falloon

Local realtor Francis Chiasson was preparing to head over to Victoria to meet his new grandchild on Saturday.

He just had to finish his bobsleigh race first.

Chiasson, who turns 60 in April, isn't content to fall into any stereotypes with his choices to stay active. He and brakeman Marshall Viner placed sixth out of the nine teams entered in the bobsleigh event at Whistler Sliding Centre on Feb. 7, 4.41 seconds back of winners David Eastwood and Harrison Smith.

Chiasson first experienced the sport just before the 2010 Winter Olympic Games took over the track, beginning as a brakeman and soon progressing to driving.

"It's a thrill. It's an adrenaline rush and that gets you hooked on it," Chiasson said, noting he doesn't come from a thrill-seeking background like auto racing. "It's the thrill of accomplishment because this is the fastest track in the world. It's formidable."

Chiasson explained he's a mountain biker in the summer and considers himself to be in good shape, a state of being he's committed to maintaining since starting bobsleigh.

"After just a couple runs down the track as a brakeman, I realized the need to stay fit and strong so that I wouldn't hurt myself," he said. "It instilled in me the impetus to go to the gym, and since I started, religiously, I've been going to the gym three and four days a week."

Chiasson explained even starting at 55, he began the arc of a competitive athlete, going through the physical, technical and psychological challenges high-performance competitors must overcome.

"It's taught me, also, what athletes go through," he said. "They call us to the line as athletes, and it strikes you the first time you hear that over the PA.

"I didn't feel like an athlete, but I have to do everything an athlete does."

Chiasson now also serves as the vice-president for the BCBSA and seeks to get more people into sliding sports.

"It's recreational for me. It's a hobby," Chiasson said. "I'm very passionate about it. I get 100 runs a season, usually. New people come along that say 'Hey, I want to try that. How do I start?' and there might be an empty seat behind me."

Chiasson wasn't the only greybeard hitting the track on the weekend as Hugh Maguire, a dentist from South Surrey, made his competitive debut at age 52. Maguire competes from the lower ladies' start, generating a top speed of 117.66 km/h, about 20 km/h less than two-time gold medallist Mitch McCullough generated from the highest skeleton position the same day, in Sunday's race.

Maguire won gold on both Saturday and Sunday with Alana Parno taking silver in the two-sled competition both days.

Maguire's curiosity was piqued after the 2010 Olympics and he soon took part in the public skeleton offerings at the park — an opportunity for which he's grateful.

Maguire explained he has a bad knee that keeps him from regular distance running, but comes up the Sea to Sky three times a week to get his skeleton training in. He's hoping to make progressions within the sport and isn't ruling out the chance he might compete beyond the BCBSA.

"I'm a guy, I want to compete," he said. "I want to be like these guys and start from the top.

"I'm Irish. Ireland has a skeleton team. If I ever got good enough where I could actually do something, then I would do it. But if I never get any further than what I'm doing right now, then I'm good with it."

Maguire, who has drag-racing experience, said he had little difficulty adjusting to the sport, and said those with the right mindset should be able to do it.

"It's not hard. If you're in halfway decent shape, I think anyone can do it, to be honest. As long as you don't panic, you're fine," he said. "They tell you right at the beginning 'you're like a sack of potatoes when you first start.' The more relaxed you are, the better it is."

Though a lot of the focus of the public skeleton and bobsleigh offerings is to light a fire in teens looking to find their athletic niche, such as 15-year-old bobsleigh pilot Parker Reid taking one of the plank bobsleighs into competition with brakeman Kris Rhodes.

However, BCBSA president Damian Boyle explained those who get started at an advanced age still play a role in helping to spread the sport.

"We've got a home for everybody. Our doors are always open," Boyle said. "It's incredibly important to the program. These people that are up there, they're the ones that are going to bring the young grandsons, nieces and nephews. 'If granddad can do it, you can do it.'"

He also takes pride in seeing people "having fun doing a sport they previously thought was not accessible."

Boyle was also encouraged to see four of the nine bobsleighs competing in Chiasson's division piloted by women, the highest number beginning from the top of the track in a BCBSA event.

As well, the event wasn't just open to BC competitors — an Australian duo took on the Reid sled in the plank category, while three South Korean sleds chased David Eastwood and Harrison Smith's winning sled from the very top on Saturday, and Bill McGillivray and Matt Poisson got past a four-sled field on Sunday.